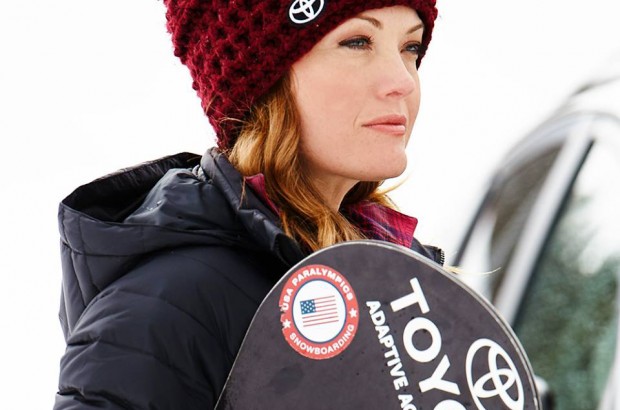 Toyota Helps Wounded Soldiers Get a Lift from Sports

The challenge, excitement, and adventure of action sports can be the ultimate therapy for wounded soldiers. Amy Purdy’s Adaptive Action Sports and Toyota help them get into the action.

If you watched this recent season of Dancing With The Stars, you know who Amy Purdy is. That super gorgeous, amazingly talented dancer who took second place on the show, who also happens to be an olympic caliber snowboarder? And—oh yeah—did we mention she does it all on a pair of prosthetic legs? Yes, THAT amazing woman. She’s the co-founder of Adaptive Action Sports, a non-profit group collaborating with Toyota to create action sports opportunities for young adults and wounded soldiers living with permanent physical disabilities and Post Traumatic Stress Disorder. AAS’s mantra is that action sports encourage confidence and independence in participants.

Purdy herself was a double-amputee at the age of 19, and she began snowboarding seven months after receiving prosthetics. She won a bronze medal at the 2014 Paralympic Games in Sochi, and finished in second place this season on Dancing With The Stars.

So how does she convince a wounded veteran or teenage amputee that taking up skateboarding or snowboarding is a good idea?

“My impetus for starting AAS was to give others the chance to see the path I followed to get here: from my hospital bed, to the Paralympics medal podium, to Dancing With the Stars,” said Purdy. “If someone who has been born with a congenital abnormality, lost a leg, or suffered a brain injury succeeds at snowboarding or skateboarding, they will believe that they have the ability to conquer other challenges and truly be ready live beyond their limits. We appreciate Toyota’s enthusiastic support in helping even more people go beyond their limits, to really go places.”

Even if a participants have a hankering for the half-pipe, they still have to get to where the snow is—and that’s where Toyota comes in. They’ve provided AAS with a mobility Sienna minivan for transporting athletes to and from the training center in Colorado. This new partnership with allow AAS to continue their efforts, and increase its accessibility to wounded soldiers. New transportation donations from Toyota will allow AAS to host 10 competitive para-snowboard events for wounded soldiers by the end of 2015.