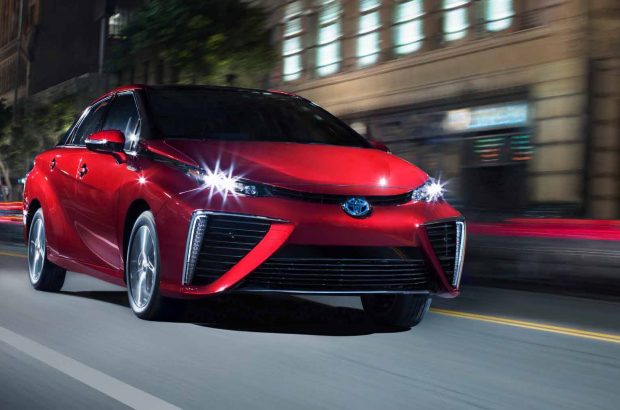 What do kale salad, the iPhone, Disneyland, and Zinfandel wine have in common? They’re all ubiquitous parts of American life that got their start in California. With the the success of hydrogen fuel cell vehicles like the Toyota Mirai, the next big thing out of the golden state might be hydrogen-powered cars.

Hydrogen-powered cars started off fewer than five years ago as a curiosity in the auto world. They have quickly and cleanly risen to be a real alternative in the search for great cars that don’t destroy the planet. Toyota recently announced that its hydrogen fuel cell sedan, the Toyota Mirai, has passed the 3000 mark in sales. This number is substantial, considering the cars have only been available in California, and that the hydrogen fueling stations are mainly located in large urban areas like Los Angeles and San Francisco. Honda also offers a hydrogen fuel cell car, the Honda Clarity. Hyundai just debuted its 2nd generation hydrogen fuel cell crossover SUV, the Nexo, which will go 370 miles on a single tank. The most amazing thing about all of the hydrogen fuel cell cars is that they produce no pollution at all–zero emissions. What makes the Toyota Mirai so remarkable is how unremarkable–in a good way–the driving experience is. If no one told you that you were driving a radically new piece of engineering, you probably wouldn’t notice anything markedly different about the drive. Driving a car powered by hydrogen feels like driving any other modern car with a good dose of power—it’s responsive, quick, and lithe. The main thing you’ll notice is the lack of engine noise, which makes for a wonderfully quiet ride.

One remarkable thing we appreciate as VroomGirls is that one of the principal developers of this technology is an amazing female engineer, Jackie Birdsall.

“I’m honored that over 3000 of our customers are now driving the Toyota Mirai. We call these customers ‘Trailblazers’ as they are putting our two plus decades of engineering work to the test in the real world. I hope these Trailblazers, Toyota team members and affiliates who have supported the launch of the Toyota Mirai are as proud of this milestone as I am.” —Jackie Birdsall, Toyota Mirai engineer

Unlike charging up an electric car, the process of fueling up a hydrogen car feels exactly like fueling up a traditional gasoline car. You pull up to the pump at a fueling station. The hydrogen pump has a regular nozzle, with an info screen and a keypad, and you use a debit card—just as if you were buying regular gas. The process takes about five minutes. A full tank will take you about 300 miles.

My car is safer than your car Having a large number of these cars out in the wild, largely without incident, has also shown that hydrogen-powered cars are safer than traditional gasoline in many ways. The car’s fuel tanks are specially designed to resist impact, and are less penetrable than a gasoline tank. In the unlikely event that the tanks are compromised, hydrogen is far less combustable than gasoline—it dissipates quickly into the air. Since hydrogen is not a liquid, it will not pool in a big, flammable mass of flames the way gasoline can. And the mandated safety standards for hydrogen are far more rigorous than the standards that have been put into place governing petroleum use.

The main thing at the moment that is keeping the growth of hydrogen cars in check is that the infrastructure needed to get hydrogen fuel stations up and running is in its infancy. The West Coast has the most at the moment, and the East Coast stations are ramping up as well. As the technology advances and gains popularity, hydrogen will become more available in populated areas.