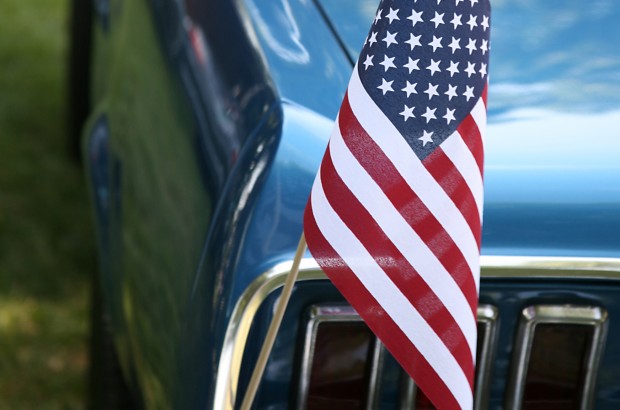 As it’s our country’s birthday, we at VroomGirls thought it would be nice to ponder the merits of an American-made car, even though in this global economy, exactly what constitutes an American-made car is getting harder to discern. Happy Birthday USA!

Why buy American? Be A Patriot

Not long ago, I was driving by the Port of Long Beach, California, and I saw a Chinese-registered ship heading out to sea. It was stacked to the sky with shipping containers, and yet its waterline must have been ten feet above the waves. Now, I’m no mariner — I once nearly drowned in my own bathtub — but that says to me that those containers were empty. That’s our trade deficit at work: We are importing goods and exporting money. Americans no longer seem to respect American goods — so why should the rest of the world?

My job allows me to travel quite a bit, and from what I’ve seen, we are the only country with a sizeable auto industry that doesn’t support it. The Japanese buy Japanese cars. The Koreans buy Korean cars. The French buy French cars, and if you know anyone who bought a Renault or a Peugeot in back in the 1980s, you know that experience is right up there with self-flagellation. Some of this loyalty is backed by frightfully high import tariffs, but for the most part, it’s good ol’ patriotism at work.

They Work Hard For The Money

Now, the fact is that the American auto industry screwed up royally in the 1970s and ’80s. They built crappy cars and lost our trust, just as the Japanese and the Germans were learning to tune their products to the American market. That’s why, just one generation later, millions of Americans — your author included — own foreign-branded cars.

Today, Chrysler, General Motors, and Ford are working overtime to regain your trust. GM and Ford build some truly outstanding vehicles, and Chrysler is catching up rapidly. Still, the Big Three are having a hell of a time overcoming what seems to be a national bias against American cars. They have to do things twice as well as the imports to get half the recognition. And yet Korean automakers Hyundai and Kia — who also built junk throughout the 80s and 90s — have embarked on their own rapid-improvement program, and Americans have embraced their cars with open arms – their cars look great – though quality problems do still plague them.

Is That An American-Made Seat Belt Or Is It Mexican?

Now, I’m not saying that it is the duty of all patriotic Americans to buy American cars. I think you should buy the product that best serves your needs. But I do think you should at least give America a chance. As someone who has driven nearly every car on the market, I can tell you that many of my fellow Americans have American cars all wrong. They aren’t garbage. Most are good; some are great.

And by the way, don’t assume that an American car is 100% American. A lot of GMs, Chryslers and Fords are built in Canada and Mexico. Conversely, several foreign automakers, including Honda, Toyota, Subaru, Nissan, BMW, Volkswagen, Hyundai and Kia, are built in the United States. As an example, Toyota assembles its best-selling Camry in the United States using parts that are 90 percent American-made. Conversely, the Ford Fusion is built in Mexico with 80 percent of its parts manufactured outside of the U.S. Is an American car one that puts Americans to work in America, or is it one where the profits flow back to the home country to a few car execs? Every new car has its assembly location listed on the window price sticker, along with where its parts were made. You can judge for yourself.

The bottom line is that the more money we send offshore, the deeper we sink our collective fortunes. We can’t survive by exporting money and empty shipping containers. We need to demand the best products possible, but we also need to support American industry in order to protect our jobs and our country’s well-being.

Next time you’re shopping for a car, try out an American brand. If it suits your needs, buy it — and write a letter to the CEO telling him (alas, not her — no automaker currently has a female CEO) that the “Made in USA” was a consideration in your purchase. And if the American car on your short list wasn’t good enough, write the CEO and tell him why. Hopefully, they’ll listen. And maybe we can stop sending empty cargo ships back to China.

3 Responses to “Why Buy American?”