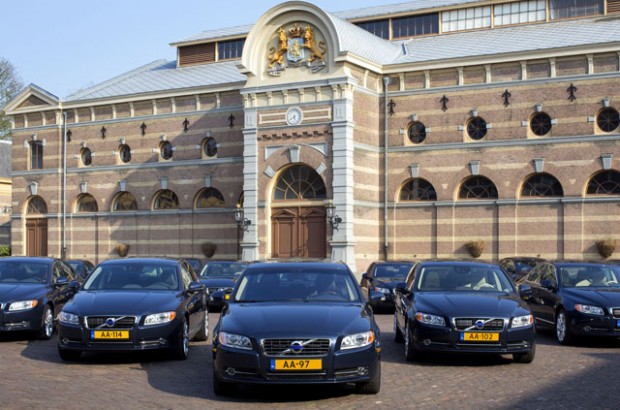 Volvos Fit For A Queen

Throwing a party for a whole country is quite an undertaking. Volvo is on call when royalty needs a ride.

There are parties, and then there are Parties. In a once-in-a-generation event, Queen Beatrix of the Netherlands abdicated her position as head of the Dutch royal family to her son, Willem-Alexander. The event has quite an exclusive guest list–modern monarchs from near and far came to see country’s first new king in 123 years. So what does a queen do when her guest list includes Arab sheikhs, Prince Charles, and almost 50 other royals? She enlists the service of a fleet of shiny new Volvos to transport her guests in style. The sharp-looking Volvo S80’s were photographed together at the Royal Stables in The Hague. As much as we would have loved to see a fleet of Volvos painted in our signature Vroomgirls orange brought in for the Dutch, we must admit that this fleet looks very stately and royal just as they are.

Of course, royalty weren’t the only people invited to celebrate. The Dutch turned out in throngs to celebrate their new king. Much like us Vroomgirls, the Dutch are lovers of orange–it’s their national color, and a big part of their identity. Remember all the crazy orange revelry when the Netherlands won the World Cup a few years back? Their monarchy is known of the House of Orange. Orange cakes, macarons, and chocolate orange high heels were displayed in shop windows. Onlookers sported orange clothes, orange feather boas, inflatable orange crowns, and any other piece of orange adornment they could find. The palace was surrounded by a sea of citrus-hued onlookers.