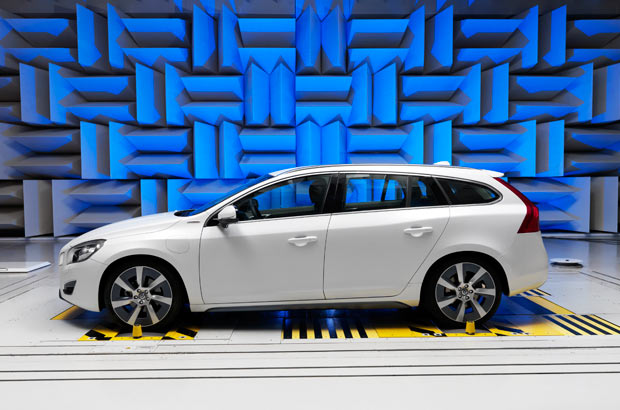 Volvo’s Engine Noise of the Future

When an electric car takes off after the red light turns to green, what sound should it make? The typical vroom we associate with gas engines?

That’s the conundrum Volvo is tackling in one of the car industry’s most modern acoustic labs. “The aim is to fine tune the noise level from the vehicle in order to create a pleasant sound experience,” says Peter Mertens, Senior Vice President, Research & Development at Volvo Car Corporation.

He’s so serious. Wouldn’t it be clever to have chirping birds, or laughing children, or even applause? Who says an electric car, which is rather quiet, has to sound like, well, a car?

In many test-drive reports, the electric car is described as being totally silent. From the acoustic expert’s perspective, however, the electric car’s silence is a bit of a misnomer. To the experts, it’s rather noisy.

“The combustion engine sound is instinctively connected to our perception of driving a car. It works as an acoustic mat that blankets other sounds. When that mat is lifted off, you suddenly become aware of a number of other sounds,” says Martin Spång at Volvo Car Corporation’s Sound laboratory.

Sounds such as the splashing of fuel in the fuel tank, and tires rolling over the road surface, penetrate the driver’s consciousness when the car runs solely on electric power. When a Hybrid’s diesel or gasoline engine cuts in again, however, the car sounds once more like we are used to.

In order to find the right acoustic profile for the Volvo V60 Plug-in Hybrid, Volvo Car Corporation’s experts are working on the creation of the quintessential engine sound, even if it’s fake and created solely by computers.

“What’s important here is to strike the right balance between traditional and new sources of noise. What’s more, customers will get used to the fact that electric cars sound somewhat different. This will become part of these cars’ personality — their attraction and their trademark,” says Volvo’s Spång.

To create this new version of an everyday sound, Volvo experts head to the company’s acoustic lab in Göteborg, Sweden. There, a 2500 square meter concrete chamber has sound-absorbing walls and ceiling designed to dampen reflecting noise.

The floor of the chamber is hard and smooth to resemble sound in the same way as a road surface does. Test cars can be driven on rollers with various surface treatments to simulate different road types. “The vehicle’s sound level is closely connected to the luxury car experience,” says Volvo’s Peter Mertens.

We think the engineers should rethink what an engine sounds like. If it really is about creating a “luxury car experience,” then maybe one of these would be fitting: a sonata from the London Symphony Orchestra, the thunder from horses racing at the Kentucky Derby or the sound of a yacht slicing through the sea during a regatta.

Volvo is on its way to being the birthplace of your next car’s engine sound.