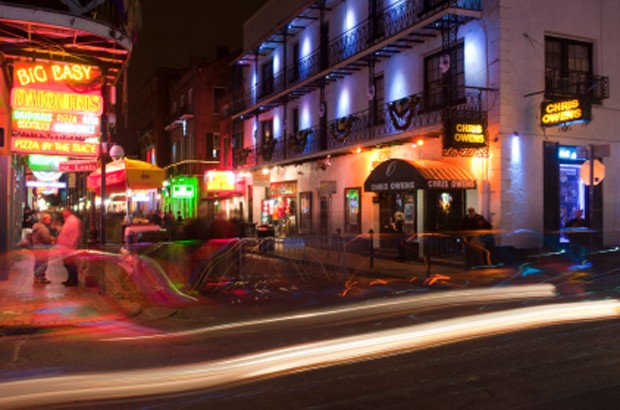 Still unique, still flavorful, and still charmingly unlike any other place in America. Two nights tripping the Big Easy.

There are few streets in America that elicit as salacious a grin upon mention as travel to New Orleans’ legendary Bourbon Street. Its thick air, heavy with the spicy scent of Jambalaya—and spiked with the sharp, rummy notes of a hand-mixed hurricane—serves as a stimulant to the masses. Maybe it’s the intoxicating mix of glitz and grime that fuels the palatable fervor. Or, maybe it’s just the rare opportunity to let loose, allowing NOLA’s unabashedly scandalous personality to pick up wherever yours left off.

Whatever lies behind the mystery of this deep-south city, commonly referred as the northernmost Caribbean island, is an untidy mish-mash of influences that have been swirled together and served straight up. Translation: to travel New Orleans doesn’t disappoint.

You’ll cruise into the city on four wheels, but I’m recommending downsizing to two for your first official tour. Bike-tour operator Confederacy of Cruisers offers a three-hour spin that encompasses six miles while the laid-back crew divulges the coolest architectural and historical info bytes. For first-timers, the slow-pace pedal eases you into the locale, highlighting the city’s most charming traits and also educating road trippers of the areas they’ll want to steer clear of.

Once you’ve gotten the lay of the land, you’ll only need to scout out the Saint Louis Cathedral—the oldest U.S. Catholic cathedral in continual use—to find Jackson Square. Plunked down in the heart of the French Quarter, the square teems with local artisans, street performers and reeks of gimmicky souvenirs. It’s tourism at its most obvious, but it’s a box you’ll need to check to consider your NOLA visit official. And while we’re on the topic of boxes that need checking, you absolutely must (must) eschew Weight Watchers for the weekend to indulge in the French delicacy that is the Beignet. Café Du Mond specializes in the deep-fried dough, which is sprinkled with powdered sugar and served up three at a time (really, forget about the diet for a few days—there’s no such thing as “too much” of anything in this town).

Night One: Roundabout on Royal Street

Where to stay? Why not sleep smack in the middle of it all? The landmark Hotel Monteleone on Royal Street is my suggested stay. Not only is the 600-room historic hotel rumored to be haunted, it’s practically the doorway to the French Quarter and boasts one of the city’s most novel watering holes—The Carousel. As you might have guessed, the small-scale bar twirls in true merry-go-round style, concocting authentic blends like Pierre’s Sazarac, an unassumingly strong cocktail that poses as a petite pink pour infused with absinthe.

Juxtaposing those innocent Creole cottage-lined roadways is the eerily revered St. Louis Cemetery No. One, the most popular and oldest city burial site—and also the alleged resting place of renowned Voodoo Priestess Marie Laveau. Only eight blocks from the Mississippi River, the high water table mandates that the cemetery house only above-ground graves, most of which are from the 18th and 19th centuries. Wander the cemetery, which is laid out over one square block, early in the day to avoid the afternoon siesta-style closing.

Walk back toward the hotel for brunch (9 a.m. – 1 p.m.) at Brennan’s Restaurant on Royal Street, where the decadent dessert bananas foster originated. (Why wouldn’t you put rum in your dessert, anyway?)

If New Orleans is the birthplace of jazz, it’d be a sin not to indulge during your stay. Frenchmen Street is only steps away from the French Quarter, but it feels like a different world. This two-block district is where you’ll find the locals, packed tightly into less-than-flashy music clubs like d.b.a., which is housed in a building built in the 1880s. It’s also where you’ll score a decent deal on drinks… and fittingly, find several diners open late into the night (it’s entirely acceptable to ask for a “go-cup” before you leave if you’ve yet to drain your drink—open alcohol is permitted to pedestrians in NOLA as long as it isn’t in glass or metal). 13 Monaghan serves their menu until 4 a.m. if you need a bite to eat before heading back to the hotel. Don’t let the fourth meal fool you, this is the sophisticated side of NOLA nightlife.

If you’re ready to steer south for a weekend away, remember one thing. On city soil it’s no longer New Orleans. You’ve officially made it to New Awr-linz.