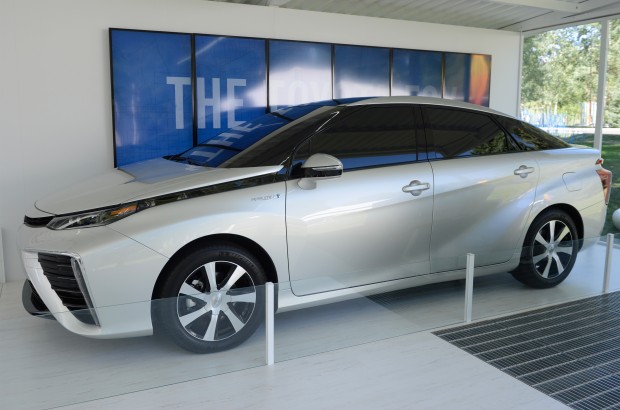 Everyone loves a premiere. There is just something exciting about seeing something first, before all your friends and neighbors. That new movie getting all the Oscar buzz? Seen it. The new season of (fill in the blank with your favorite binge-worthy show here)? Oh yeah, stayed up and watched the whole thing last night in one go. Today, at the Los Angeles Entertainment and Tech Tour, Hollywood’s tech elite will get their first chance to see the next big star–Toyota’s upcoming Hydrogen Fuel Cell car.

Technology and the entertainment industry have always had a thing for each other. Where would would our favorite movies and television shows be without all the fancy gadgets? Sometimes, technology is the inspiration for the work–think of all the cool high-tech spy devices used in a show like 24 or Homeland. And where would Michael J. Fox be without the DeLorean and flux capacitor in Back to the Future? (Hint: not in the future)

When it comes to how our entertainment is delivered, technology is equally important. In a relatively short period of time, we’ve gone from watching film and listening to vinyl to keeping vast music libraries on our phones, and more movies and TV than we know we will ever watch in a lifetime in a teeny little box beside our HD plasma screen TV.

Well move over little box, there’s a new amazing technology in town. The new Toyota Hydrogen Fuel Cell Vehicle is poised to take the entertainment industry by storm. The ultimate in environmental transportation, it runs on hydrogen–the most abundant element in the entire universe. Its only emission is water vapor. And it can be fueled with compressed hydrogen in less than five minutes, and go over 300 miles. Sounds like science fiction, but it’s real–and will be on sale in 2015.

Although it is sleek and exotic, (hey, this is Hollywood, after all!) driving a fuel cell vehicle (or FCV) isn’t much different than driving an electric or hybrid electric car. Like any new thing, it sounds a little strange at first. (Hydrogen? Whaaaat?) And he’s where the entertainment industry comes in: when consumers can see new technology being used in everyday situations, such as on TV, it seems more approachable, and less…weird. Remember when the Toyota Prius came out, almost 15 years ago? A hybrid car was a new concept, and it quickly became a media darling–it seemed for a while as if every show on TV featured a Prius at some point. And now, hybrids are accepted as a normal part of American life. So while FCV’s may sound like something you’d see on a sci-fi series, it’s real and it’s here.

So after its big debut at the Los Angeles Entertainment and Tech Tour, we expect to start seeing a lot more of Toyota’s sleek new hydrogen fuel cell car. It’s coming soon to a theater–or driveway–near you.