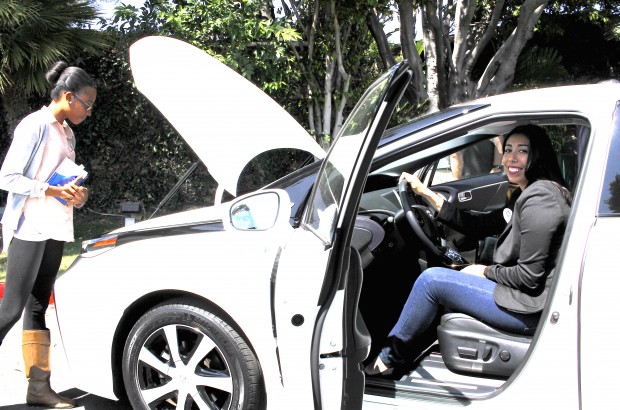 What is the Toyota Mirai? The 2016 Toyota Mirai –the Japanese word for “future”–is Toyota’s launch of a completely new kind of car. Instead of running on traditional gasoline, it relies on hydrogen for fuel, and produces zero pollution or carbon emissions. And that’s kind of a big deal.

Today is, quite simply, a pretty amazing time for cars. They’ve made our way of life possible in a way that our grandparents could never have imagined in their day. But the way cars move—aka the internal combustion engine—has really not changed that much since their beginning: we drill for oil, turn it into gas, put it into a car, and the engine burns it, making our cars go. The simplest and fanciest of cars have all relied on this basic principle for the last 50 or so years. Of course, as we now know, this transportation progress has come with a price. The by-product of burning gasoline is emissions that threaten the well-being of our planet. Between the limited availability of oil and the pollution it causes, some new solutions are sorely needed.

Things have been changing rapidly in the last several years—we’ve seen the gas/electric hybrid go from novelty niche market to commonplace. All-electric cars, charged with electricity from the power grid, provided the next step in short range, urban commuting. Plug-in hybrids, which use both gasoline and electicity, have provided more flexibility as well. But the batteries used in these cars do have some physical limitations. And the hours required to charge electric cars is not always the best solution in terms of convenience. The electricity used to power them is still coming from the same power grid as all of our other appliances. Depending on the how energy in your area is generated–which could be coal, oil, or nuclear power–the environmental impact can be significant. And if you primarily charge an electric vehicle at home, you will definitely see an increase in your monthly electric bill. This isn’t to say that electric cars aren’t a great part of the solution–they definitely are. But they are not the end of the road for the development of the cars of the future.

The good news is that change is happening fast! We are set to see more changes in transportation in the next five years than we have seen in our lifetimes. Onto this stage comes the next step in car technology—the hydrogen-powered fuel cell car. In October 2016, the Toyota Mirai will hit the streets.

How does it work?

In a nutshell, here’s what happens inside the car: Hydrogen is pumped into the car’s specially-made gas tank. Oxygen in the air from the car’s intake system (those big vents in the front) is sent to the fuel cell, where it meets up with the hydrogen. A chemical reaction between oxygen and hydrogen takes place in the fuel cell stack and produces—remember this from chemistry class?—electricity and water. The electricity then powers the car’s motor, and the only byproduct is plain old water.

How do I drive it?

From a convenience standpoint, what makes the 2016 Toyota Mirai Sedan so remarkable is how unremarkable–in a good way–the driving experience is. The car has a generously-sized interior, which is as comfy as any other you’d find in a mid-to-large sized sedan. No special equipment is needed for your home to charge it. No overnight anything. It doesn’t run on french fry oil. You don’t plug it in at shopping malls. The process of fueling feels exactly like fueling up a traditional car. The hydrogen pump has a regular nozzle, with an info screen and a keypad, and you use a debit card. The process takes about five minutes. A full tank will take you about 300 miles, just like a traditional car. Driving a car with a fuel cell feels like driving any other modern car with a good dose of power—it’s responsive, quick, and lithe. The main thing you’ll notice is the lack of engine noise, which makes for a very quiet ride. In fact, if no one told you that you were driving a radically new piece of engineering, you probably wouldn’t notice anything markedly different.

New technology is great for the environment, but can you feel confident enough about its safety to load your family into it? Yes. Hydrogen fuel cell technology has been around for a while. In fact, fuel cells have been around since the mid 1800’s. In the 1960s and 70s, hydrogen fuel cells powered NASA’s space capsules and space shuttles—and the water, which was a by-product, also provided astronauts with water clean enough to drink! The first fuel cell busses hit the roads 1993, in major cities all over the world. Hundreds of them have since been used in Japan, Europe, and the USA. And Toyota isn’t the only automaker building fuel cell cars, either. Hyundai produces a hydrogen version of the crossover Hyundai Tucson, and the Honda FCX Clarity has been available for a few years. Ford, General Motors, Mercedes-Benz, BMW, and Nissan also have hydrogen fuel cell vehicles under development and on the road at the moment.

Hydrogen is, in fact, safer than traditional gasoline in many ways. The car’s fuel tanks are specially designed to resist impact, and are less penetrable than a gasoline tank. In the unlikely event that the tanks are compromised, hydrogen is far less combustable than gasoline—it dissipates quickly into the air. Since hydrogen is not a liquid, it cannot pool in a big, flammable mass of flames the way gasoline can. And the mandated safety standards for hydrogen are far more rigorous than the standards that have been put into place governing petroleum use.

Where does the hydrogen come from?

Today, most hydrogen is derived from natural gas production. Other methods include producing hydrogen by splitting water using solar, wind or other renewable power. In the ultimate in renewable energy, hydrogen can be derived from biomass. That’s basically a nicer name for sewage wastewater and trash. Municipal waste can be turned into (clean!) hydrogen that can fuel our cars, solving two ecological problems at once. Unlike fossil fuels, which are limited to random underground reserves, hydrogen is the most abundant element in the universe. It does need to be processed for automotive use, of course, but any region in the world is capable of producing its own hydrogen. This will lead to a reduced reliance on foreign oil reserves, and a massive reduction in the energy and pollution generated needed to drill, transport, and refine petroleum.

The car itself is a mid-size sedan. It is a cutting-edge, high -tech design that will definitely turn heads. But from the outside, you wouldn’t be able to look at it and know that something very different is going on underneath the hood. It just looks like a cool new car. The interior is comfortable and elegant. The dashboard is definitely high tech and cool, but not alien by any means. If you can manage an i-Pad, it’s totally doable. You may be thinking, enough about all that–what color does it come in? The first model will be available in silver, black, white, and a stunning electric blue.

When you look under the hood, the first thing you notice is that it’s remarkably clean. Since you’re not burning all that carbon and lead, there’s not that dirty, grimy coat of dust that traditional engines make. With its tidy, colorful coolant tanks and covers, the engine looks like it would be as at home in your office as it would in a mechanic’s shop. There is no oil to change. No spark plugs. Since there’s no grinding of metal parts and no gasoline burning, the engine is clean, cool, and quiet.

Where do I find this hydrogen?

At present, consumer access to car-ready hydrogen is the juggernaut hurdle to hydrogen-powered vehicles being available to everyone. Compressed hydrogen itself is plentiful—it’s used extensively in industry, and already travels across the country in large underground pipelines. The last step is getting the hydrogen to a convenient fill-up spot near you. At present, this is mainly happening in the population-dense areas of California. However, hydrogen filling stations are already available all over the country. Most importantly, both the federal government and the world’s automakers are committed to building the proper infrastructure to make this a reality. Millions in federal funds have been earmarked for this purpose, and a myriad of auto makers–including Audi, Mercedes-Benz, GM, Ford, Nissan, Honda, BMW, and others–have committed resources to building out this infrastructure as well. If this all sounds a little far-fetched, think back to the boom of cell phones or internet access. What seemed like science fiction in the late 1990’s—little computers and phones in everyone’s pocket—is commonplace reality now. Once the demand reached the tipping point, cell phone towers sprung up across the country. And once everyone started getting little wi-fi cards in their laptops and phones, wireless internet service went from a novelty to something you can get with your latte at any Starbucks. Infastructures are built, and then we can’t remember a life before they existed.

How much will it cost to drive?

The first Toyota Mirais will be available to lease or buy in October 2015, with pre-orders available in June. Initial pricing has been set at $58,325, but federal and state incentives drop the price to around $45k. More attractive to most drivers will be the three year lease option, witch will be $499 a month with $3649 due at signing. As an extra incentive to new Mirai drivers, Toyota will provide free hydrogen fuel to Mirai drivers for their first three years. That means if you drive 15,000 miles in a year, that would be about 50 fill-ups a year. If gas hovers around $50 per fill-up, Toyota is providing a fuel subsidy of about $2,500 per year. Over the course of a three year lease, that’s $7500 in fuel, compliments of Toyota. Other incentives include 24/7 dedicated Toyota Mirai tech support reps and roadside assistance, a phone app to assist in finding hydrogen stations, and 8 year/100,000 warranties.