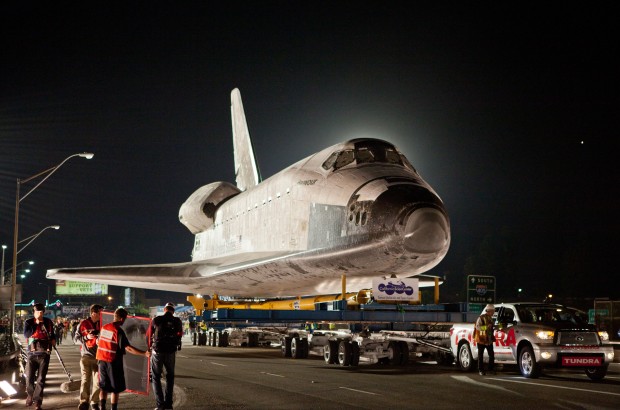 A Toyota Tundra is no stranger to towing big stuff. Boats, trailers, and campers are all in a day’s work. But towing the massive, iconic shuttle Endeavour is a higher calling.

It takes a lot to move the Space Shuttle Endeavour–fire, rockets, engines, thrusters, boosters, and that massive display of energy you see at a launch. While staying in Earth’s own orbit, it has relied on massive industrial tanks, and recently flew in style on the back of a customized Boeing 747 into Los Angeles. The space shuttle’s September 20th LA arrival drew more media attention, oohs and aaahs, and screaming crowds of fans than a One Direction concert and all the celebrity award shows combined.

But for its last and final leg to its permanent home at the California Science Center, there was one small problem–for the last quarter mile of the journey, the Endeavour had to go through city streets and over the Manchester Boulevard Bridge, which goes right over LA’s busiest freeway, the 405. To get the job done, they needed something small (well, smaller than the Endeavour!) but mighty. So who got the honor of hauling on of America’s most inspiring icons? None other than the Toyota Tundra!

This was the first and only time a space shuttle ever traveled through 12 miles of public city streets. It’s also one of the biggest objects ever transported down an urban corridor. While a custom-built Endeavour transportation system was in place for most of the journey, the finish line was crossed by the Tundra.

“There is no larger or more recognizable icon of the U.S. space program’s success than the shuttle, and to have it towed by the Toyota Tundra is not only an incredible example of the capabilities of the truck, but an honor to be part of history,” said Ed Laukes, Toyota Motor Sales’ vice president of marketing communications.

This isn’t a super souped-up Tundra. The shuttle Endeavour was towed using a Tundra CrewMax half-ton pickup, identical to 2012 models currently found in Toyota dealerships, with no additions to increase towing capacity or provide more power. After towing the Endeavour, though, this particular Tundra gets a well-deserved permanent place of honor along with the shuttle at the California Science Center.

To further support the move, Toyota has developed a host of online resources and activities that provide behind-the-scenes videos, photos, and details about the Tundra Endeavour project. Visitors to the Tundra Endeavour website can share content, sign up for email alerts, and use Twitter to the spread word about the Toyota Tundra’s role in Endeavour’s delivery. For the first 10,000 “re-tweets” the site registers, Toyota will donate $50 to the California Science Center to support building the Samuel Oschin Air and Space Center, the permanent home for the space shuttle Endeavour. The shuttle exhibit, complete with its Toyota Tundra towing buddy, will open on October 30th 2012.

The move was a great success! The shuttle has completed the move and is now resplendent in its new home, Exposition Park. And a very special Toyota Tundra goes down in the history books.

One Response to “Toyota Gives Endeavour A Lift”