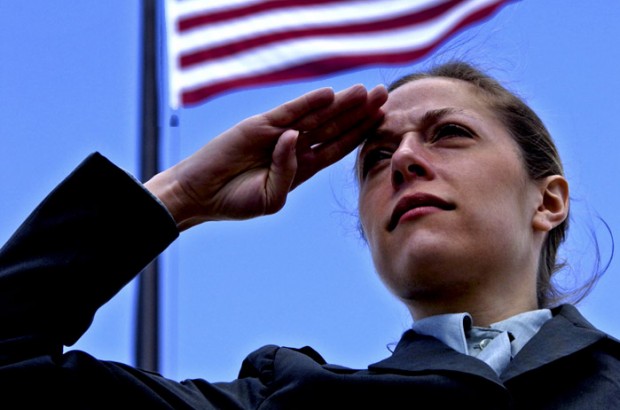 Military veterans perplexed about how to convert their very marketable skills learned in the Service to the civilian workforce get advice. Toyota sponsors the effort.

Buying A Car Can Actually Help A Vet

Women love a good cause. Or at least so says a recent survey of 12,000 women, conducted by the Boston Consulting Group. The survey results suggest that women not only want to fulfill a higher purpose in their own lives, but want to think brands and companies they buy products from are doing good things for the world too.

Well, we at VroomGirls.com noticed that Toyota is doing something very good and helpful in its decision to help U.S. Veterans find jobs after they are done serving our country. Toyota, as a major sponsor of “Hiring Our Heroes,” is backing Medal of Honor recipient, Sgt. Dakota Meyer as the face of the organization, making it possible for him to inspire veterans who are done with service and ready to find jobs.

This may be a bigger cause than you know. More than 12 percent of post 9/11 veterans are currently out of work as compared to the national average of 8.2 percent. The majority of unemployed vets are under 24 years and 29 percent in this age range are unemployed – as compared to 17 percent of younger civilians.

Meyer himself faced unemployment issues when he left the Marine Corps in June of 2010, just one year after his heroic efforts in Ganjgal, Afghanistan when he saved the lives of 36 men. But between speaking gigs and press junkets, he works in construction. His own excellent work ethic was demonstrated when the President called him at his construction job site to let him know he’d been approved for the Medal of Honor in September of 2011. President Obama mentioned at the Medal ceremony the, “He (Meyer) couldn’t take the call right then, because he said, ‘if I don’t’ work, I don’t get paid.’”

The Hiring Our Heroes program was created by the U.S. Chamber of Commerce National Chamber Foundation in 2011 to assist U.S. Veterans in job searches. With Toyota’s sponsorship, Meyer will meet with veterans at job fairs and events across the country and introduce them to a program that will help them create “personal branding” to increase their chances of translating their military experience to the civilian workforce.

Program spokesperson, Sgt. Meyer’s Military training happened right out of high school in Greensburg, Kentucky. He joined the United States Marines and was trained as a Scout Sniper. A big part of the Hiring Our Heroes program is helping veterans translate the disciplines they learned in the service to jobs after their serving is complete. So, for Meyer, being trained as a sniper, he writes in his resume, “good at task management in a stressful situation.”

After speaking to hundreds of job seeking, transitioning service members, Sgt. Meyer says that, although everyone’s experience is different, they share a common issue. “One thing each of the men and women of our armed forces face when returning home is the challenge of finding a job and hopefully, my relationship with Toyota will help make that transition easier.”

So how does a company like Toyota get involved in this noble and decidedly American cause? One influencing factor is that the company has had a major advocate for the armed forces in its executive ranks for over 30 years. Don Esmond, Senior Advisor, Toyota Motor Sales, Inc. is a highly decorated hero himself. Esmond spent five years in the U.S. Marine Corps, serving as a captain, naval aviator and helicopter pilot in Vietnam. He was awarded the Silver Star, Distinguished Flying Cross, 45 Air Medals and a Purple Heart. And Toyota is not simply sponsoring the program as a promotional ploy. One example of the company’s commitment is at its Kentucky Toyota assembly plant where there are currently over 400 full time team members employed as a result of this program.

After one year, the program has had over 200 job fairs and companies in the programs have hired over 90,000 military veterans and military spouses. On the roster of nearly 500 companies, a push is on with the goal of hiring 500,000 veterans by the year 2014. This goal will be ramped up with the help of Toyota to increase the job fair count from 200 to 400 this year.

Car companies Chrysler and Volkswagen are also participating members in Hiring Our Heroes. They, like hundreds of other corporations, pledge to consider veterans as excellent employee choices. As the pledge suggests, employees with armed services experience “show up early, leave late, know how to work in teams, how to manage people and materials, and they can adapt to ever-changing environments under demanding pressures.”