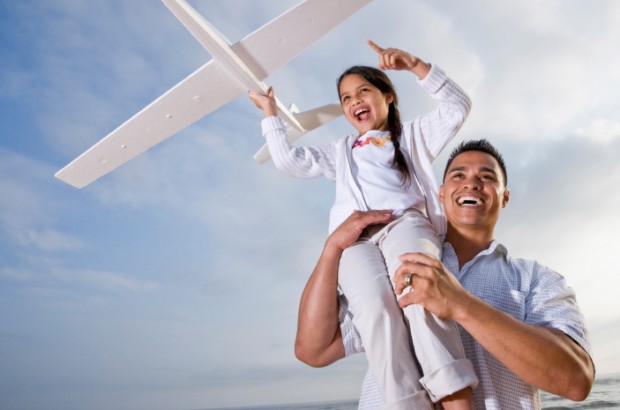 Instead of doing crazy car stunts himself, your dad might be more inclined to hang out in his man cave and watch others do the bad-ass driving from the safety of his recliner. If Dad hasn’t made the jump yet from regular DVD to Blu-Ray, this would be a good time to gift him with an upgrade. Samsung Blu-Ray player at Bestbuy.com, $89.99

Add a six-pack or so of some fast-driving Blu-Ray movies to get him started, and he can race to his heart’s content. Here are a few car-centric film faves, past and present:

Smokey and the Bandit–Trans Ams, CB radios, and Burt Reynolds’s mustache. The holy trinity of the 70’s.

Bullitt–Along with his celebrated co-star, a Mustang GT, Steve McQueen made the most celebrated car-chase scenes of all time.

Fast and the Furious, versions 1 thru 5–They are up to number six in theaters now. Without watching all of them, how would we ever understand the finer points the current one?

Days of Thunder—a young Tom Cruise and 22-year-old Nicole Kidman (as a brain surgeon!) tear up the track. According to Ricky Bobby (see below), won an Oscar for Best Movie Ever Made.

Take Him Out To The Ballgame

Instead of parked on the couch, maybe your dad needs to get out a little more. Maybe mom is always begging him to do something on the weekends. Or perhaps he’s newly single, and needs a date idea for all the ladies cruising him on the internet dating profile you set up for him last year. Although the term “picnic basket” conjures up visions of ladylike wicker and calico, this is a manly man’s version. It’s a “tailgating” basket, from a sporting goods store, all black and nylon with zippers and wheels. It’s a cooler, too. An easily portable meal makes a Sunday drive just for fun seem like a great idea. And if you want to make sure it get used sooner than later, tuck in a pair of baseball tickets in one of those pockets. And maybe a nice bottle of Scotch for the inside, to make up for all the times you tried to sneak into his liquor cabinet as a teen. Sports Authority.com, $94.99