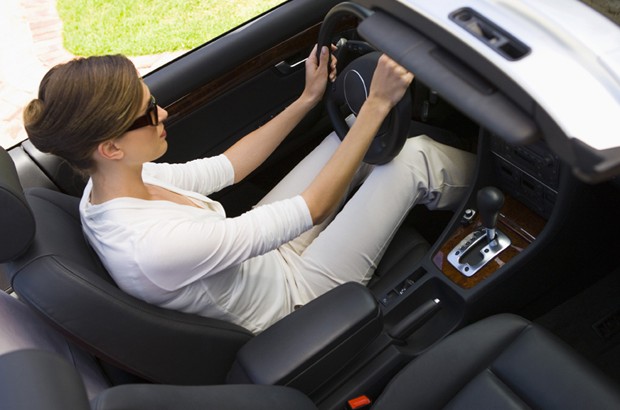 Get a Grip: How to Hold a Steering Wheel

We were test-driving the Audi A4 Avant 2.0 turbocharged in Ibiza, a Spanish island in the Mediterranean Sea. This is quite possibly the most beautiful place on earth with the kind of swirling, mountainous roads that car enthusiasts dream about. My partner, X, who writes for one of those manly buff magazines, was at the wheel. Before we set out, he proclaimed, “I’m going to be flinging this car around because I have to give it a full-on review.”

I replied, “That’s fine, but I think I’ll opt out.” He assured me that it would be fun and not to worry.

Yes, X is a confident driver and a whiz at understanding, explaining and writing about torque, steering, engines, handling and all that jazz. And yes, he makes me feel like a lightweight. But, that’s my own ego stuff.

X did drive hard, taking corners fast and like the pro that he is, even turned the ESP off (that’s the electronic stability control, which chimes in to keep the car from skidding or going into a spin) at one point to prove how steady this sporty wagon is. The Audi A4 Avant was certainly up to the challenge. I wasn’t. I have two kids, one dog and a husband at home. I like to take it easy. I’ll leave the other stuff to the racetrack.

However, when it was my turn to take the wheel, he pointed out that I was holding it wrong. “I’m what?” I said astonished. Mind you, I hold it at 9 and 3 (thumb resting gently) as I have been taught at several driving schools around the country.

“No, no! You should hold the wheel like this … on the bottom,” he said. I put my hands inside the spaces under the wheel as he suggested. He explained that in this position you are pulling down on the wheel, that you were using your arm muscles not your body and, as a result, you could feel a car’s dynamics better.

It all sounded good to me and I’m always willing to learn. And that willingness is, by the way, why driving instructors love women. Because we listen!

Nevertheless, this new position was confusing me. And I was so intimidated by X that, for a moment, I forgot how to drive. Instead of my usual smooth shuffle, I was making a series of tight, tense turns hand over hand and gripping the wheel as if it were a lifeline. And truly, it was! I was driving on roads that edged along jaw-dropping cliffs that, in turn, dropped down into churning, dark waters. Ugh. Not a place to try out new driving skills. But, what came out of this is the desire to know how to hold the wheel correctly.

Upon my return I Googled like crazy, talked to the experts and found out that, by most accounts, the proper way to hold a steering wheel is 9 and 3 or 8 and 4. And the advice was, as always, to grip lightly (not muscle it) keeping both hands on the wheel and eyes on the road.

One expert proclaimed, “Keep hands at 9 and 3,” adding, “If you’ve only had digital watches ask a senior citizen what that would be.”

Chris Monroe, a Driving Instructor at Jaguar R Performance Academy, agreed that 9 and 3 is the most efficient position because it gives you the most rotation side to side.

However, my friend Robert Sinclair Jr., AAA New York Manager of Media Relations, said that the new thinking on hand positioning was 8 and 4.

“This accomplishes a couple of things,” he noted. “First, it allows the driver to rest their hands on the lap, like a fighter pilot, which reduces the strain on the arms and places them clear of the steering wheel airbag should it deploy. The positioning also facilitates the push-pull-slide method of negotiating turns where one hand pushes the wheel, the other pulls and the wheel slides back to center through the hands to resume straight-line driving.”

So, in conclusion, I guess we were both right. But most people that I talked to were still with the 9 and 3 position. Bottom line. My ego is intact!

One Response to “Get a Grip: How to Hold a Steering Wheel”