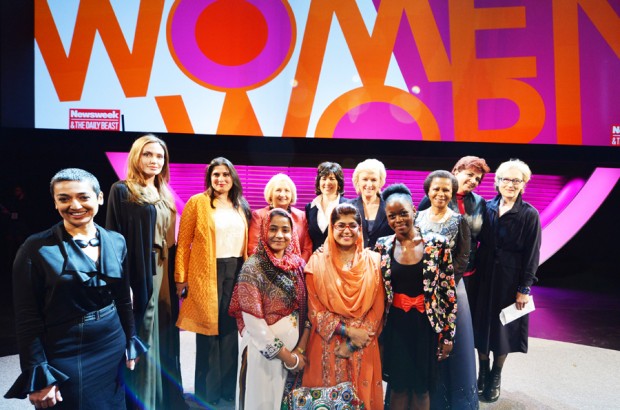 Tina Brown and the Next Wave of Feminism

Tina Brown, who has been editor of The Daily Beast, Newsweek, and Vanity Fair, champions innovative and courageous women from around the globe through her Women In The World Summit, supported by a generous grant from Toyota.

It’s easy for women to be overlooked. We are often quieter than men – think cartoonish, buffoonish Donald Trump – and we don’t like to honk our own horns – again, The Donald. And yet, every day, clever, ambitious, caring and very intelligent women are quietly toiling away, doing wonderful things to make our world a safer, easier and happier place to live. To honor and recognize these women, Tina Brown, who herself has breached male-dominated echelons in the world of publishing, founded the Women In The World Summit, which will take place in New York City April 3-5.

In a pre-summit luncheon recently held in Los Angeles, Ms. Brown awarded several women the Toyota Mother of Invention award, which gave cash prizes and recognized the accomplishments of a very brave and forward-thinking group of gals.

There’s Tricia Compas-Markman, CEO of Day One Response and co-inventor of the DayOne Waterbag. This 10-liter portable pouch collects, treats and stores water. Whether for rural villages in third-world countries where water sanitation isn’t possible, or in the case of disaster, where a clean water system suddenly has been contaminated, the DayOne Waterbag allows the user to collect unclean, undrinkable water, add a purifying agent, and then store the clean, completely drinkable water in the bag. It’s cheap and easy, allowing even the poorest communities a readily available and viable source of clean water.

These are the role models we want our daughters to be,” says Ms. Brown. “We’ve tracked down amazing women doing amazing things…solving problems in their own communities and beyond.”

Ms. Brown also highlighted the stories of other who, while not award winners, were noteworthy for their unusual courage. Manal al-Sharif from Saudi Arabia, showed inspiring bravery when she defied a country-wide ban on female drivers and hopped in her car alone to go for a drive. For that, Ms. al-Sharif was jailed for nine days. Authorities came to her house, which she shares with her husband and children, at 2 a.m. to arrest her. Upon release from prison, she was forced to quit her job as an engineer. “The men in Saudi Arabia think, ‘She’s just a woman, how can she dare to drive?'” said Ms. al-Sharif. “We can’t play sports, we can’t vote, and we can’t get a driver’s license.”

Feeling pretty good now about living the the good ole USA? Me, too.

Yet another story told by Ms. Brown was that of Clare Byarungaba, who showed great courage in her home country of Uganda when she stood up to defy anti-gay laws. It is illegal to be gay or lesbian in Uganda, and carries a penalty of prison time. But even worse, often times gays are killed before they’re even brought before a court. Ms. Buarungaba has risked her own safety, as well as her freedom, to organize protests against anti-gay laws.

Marc Bryan-Brown/Women in the World