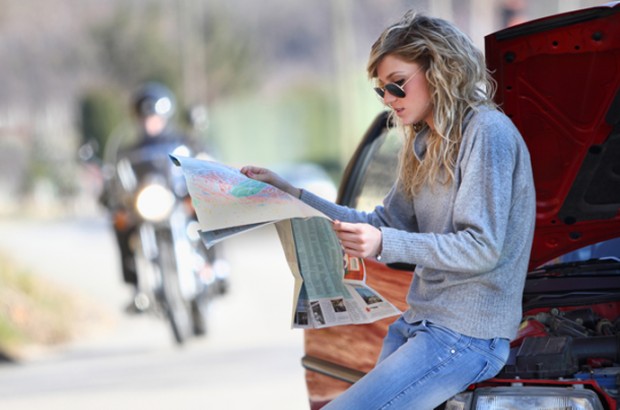 In early 2011, a 56-year-old Canadian named Rita Chretien made national news when she was discovered — starving but alive — by hunters in Nevada’s remote wilderness after being stranded seven weeks in her Chevrolet van. En route to Las Vegas, she and her husband Albert had taken a wrong turn, ending up in a sticky patch of mud and hardened snow. After three days, her husband left to search for help while she stayed behind, rationing small bits of trail mix and hard candies, and munching on snow.

On a scrap piece of cardboard, Rita had scrawled their GPS coordinates, names and contact information, and the quick story of their predicament. “No food. No gas. Dead battery,” the note begins, followed with details that her husband has left to find Mountain City. Further down, the concluding line reads, “Maybe died along the way?” To date, Albert has still not been found.

Roughly five miles from a neighboring ranch, the couple was not in the extreme setting that often springs to mind as no-man’s land. They were on a real road, equipped with a GPS unit and cell phone. By today’s standards, they were reasonably prepared. After all, how often do we purposely venture off the beaten path?

If anything, stories like this remind us that worst-case scenarios are not unavoidable. Navigation systems, in the same confident voice that directs us to turn right into Whole Foods, can take us down a seasonally impassable road. Cell phones can flunk out in a dead zone. Car batteries can die.

While most road trip mishaps won’t send you into the downward spiral detailed above, there’s a definite chance that they’ll leave you with the woulda-coulda-shoulda feeling most of us gulp down amid first realization something is wrong.

If you’re preparing to conquer the roads — no matter which setting or climate you’re heading to — take the extra time to build an adequate Just In Case kit. Trust us, not only will it put your mind at ease, it could potentially save your life, and it’s a real steal considering the overall cost and time investment. Think of it as mental and physical health insurance. And like most insurance you will be happy to never use it, but thrilled if the need arises and you do! It doesn’t take much to drain the voltage in a car battery. Accidentally leave the lit and mirrored sun visor open and you could find yourself in a pinch. Do as your dad says and include a set of jumper cables in your trunk, for you or another driver that might need your help. Then (here’s the tricky part), learn how to use them. Go ahead and Google “how to jump start a car video” now. Seriously.

This one is a given. Whether you gouge your knee changing a tire or slice a finger when you’re en-route to a wedding, DIY medical treatment is better than none at all.

A thin, wool blanket might seem like it’s just sucking valuable trunk space, but the truth is temperatures dip significantly at night, even in the summer months. Once your battery goes, you won’t have heat at the touch of the button, which is when a blanket begins to look especially appealing. If you’re stalled in tropical or desert climates, you can spread the blanket on the ground to serve as a barrier between your body and the hot surface.

I once saw a professional woman, briefcase in tow, resort to using a piece of broken plastic found on the parking lot pavement to chip away at ice on her windshield. It will save your pride, and potentially, damage to your car, to pack a handheld ice and snow scraper in the trunk. I’m loving the new solar-powered LED flashlights that charge easily and are über reliable. They’re compact, strong and prove incredibly useful, whether you’ve dropped a diamond earring between the seats (a definite emergency), or need to rifle through your trunk in the dark. A larger, crank flashlight will work just as well. Word to the wise: keep the flashlight easily accessible in your glove box.