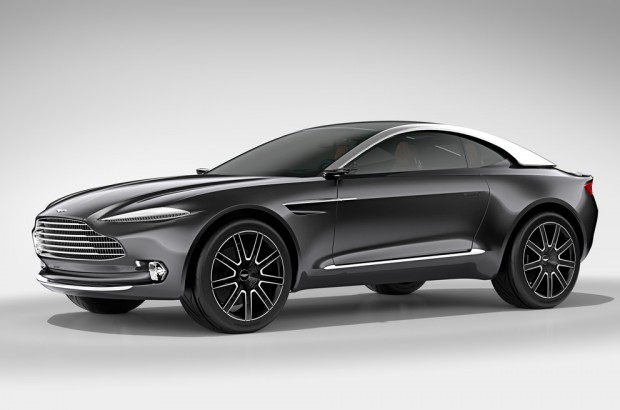 The New Shape of Aston Martin

Aston Martin sets its sights on the buyers of the future with a sporty, luxurious new crossover

Have you ever wondered why after all these years of enduring danger for queen and country, James Bond has never settled down and had a family? Sure, all the gorgeous women, exotic locales, and evil masterminds are great fun, but what about his work/life balance? Does 007 yearn for the simple joys of an English country house with a wife and kids? Maybe so, but there’s one thing we’re afraid even Mr. Bond could not handle—and that’s being seen driving a minivan. Don’t worry, James. Your friends at Aston Martin have your back.

Aston Martin, the 102-year year old luxury sports car company whose legendary cars are featured in every Bond film, is entering a new era. While the name may be normally associated with sexy little two-seaters, Aston Martin is putting a major investment into a new vehicle—a luxury crossover. Crossovers are the newest vehicles that are taking the auto world by storm, combining drivers’ favorite features of both cars and SUVs. Other luxury sport car makers have eagerly embraced this market—both Porsche and Ferrari have already entered the fray with the Ferrari FFX and the Porsche Macan. And now, Aston Martin will expand into the crossover market with the introduction of a new vehicle based on the Aston Martin DBX model shown at the recent Geneva and Shanghai motor shows.

So why the new direction? According to Matthew Clarke of Aston Martin, the company is reaching out to the buyer of tomorrow—which includes younger buyers, and also female buyers. But they aren’t abandoning what has made Aston Martin famous. Clarke considers the car less of an SUV and more of “a sports car that rides higher than usual”. The DBX is designed to fit four adults comfortably, with a roomy trunk for luggage. Because the electric motor is more compact in size, there is even room in the front for extra belongings. In addition to the extra room, the DBX features all-wheel drive, which allows Aston Martin to tackle terrains that normally aren’t that friendly to sports cars.

While more everyday practical than a high-end sports car, the visual design of the the Aston Martin DBX still shows the DNA of its iconic British design. The grille and profile of the car are streamlined and elegant. The unique paint finish featured on the DBX – Black Pearl Chromium – has been specially created to mimic the look of a genuine black pearl, and contains a micro-fine layer of chrome to deliver a level of reflectivity that cannot be obtained through normal paint finishes.

So rejoice, Anglophiles with families and/or luggage. Your dream car is on its way! But you will have to wait a bit. According to Clarke, Aston Martin’s new generation will not be available until 2020. This should give James Bond—and other Aston Martin fans—enough time to start thinking about settling down starting a family. Or at least think about how many captured criminal masterminds can fit comfortably in the back seat on the way back to Mi6 headquarters.