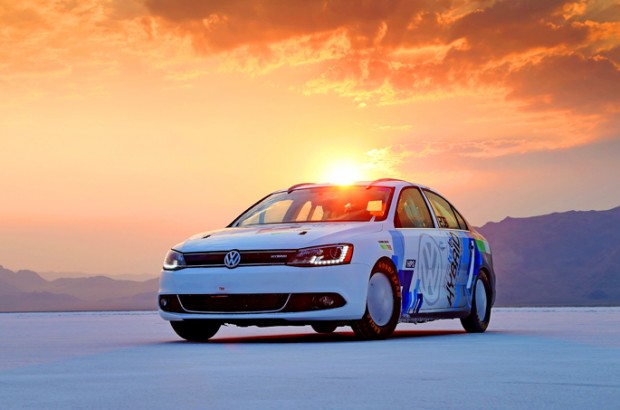 A Motor Trend magazine writer hits the Utah desert in a 2013 Jetta Hybrid and sets a crazy hybrid speed record of 185 mph.

Maybe you’ve cursed a few times driving behind those gas-sipping Priuses or Civics. They aren’t moving as quickly as you’d like. But here’s the truth: it’s not the car, it’s the driver.

Hybrids can kick it when the driver stomps on the gas pedal. Yes, really, a Prius will scoot, if it’s asked. It’s just that most people who buy a hybrid are likely choosing it because the cars are FUEL EFFICIENT. And that means, the driver is probably treading lightly on the accelerator, because she wants to.

That’s where this 2013 Volkswagen Jetta Hybrid comes in.

Okay, so this VW Jetta, the one that reached 185 mph this week (driven by Motor Trend Associate Editor Carlos Lago) at the famed Bonneville Salt Flats near Wendover, UT, was modified in Germany to run in this particular speed trial, the Southern California Timing Assn’s annual Speed Week. Sorry, but if you buy the new Jetta, your speedo isn’t likely to reach 185 mph, even with a stiff tail wind. Yours will be quick, just not silly quick. So you probably won’t set a new hybrid speed record.

The 2013 Volkswagen Jetta, when it debuts this fall, will run on a fuel-efficient 1.4-liter turbocharged, direct-injection 4-cylinder, 150 hp gasoline engine. It is paired with an electric motor that produces another 27 hp, for a total of 177 hp. Volkswagen says the car will nab about 45 mpg in combined city and highway driving.

“Achieving this speed at Bonneville shows that the all-new 2013 Jetta Hybrid is a distinctly different offering in the compact hybrid class,” said Jonathan Browning, CEO and President, VW Group of America. “As well as being expected to achieve combined fuel economy of 45 mpg, the Jetta Turbo Hybrid also retains the fun-to-drive nature you expect from a Volkswagen in a segment dominated by less exciting vehicles.”

Then next time you’re stuck behind a slow-moving hybrid, curse the driver, not the car.

2 Responses to “Hybrid Speed: Putting The “Jet” In Jetta”