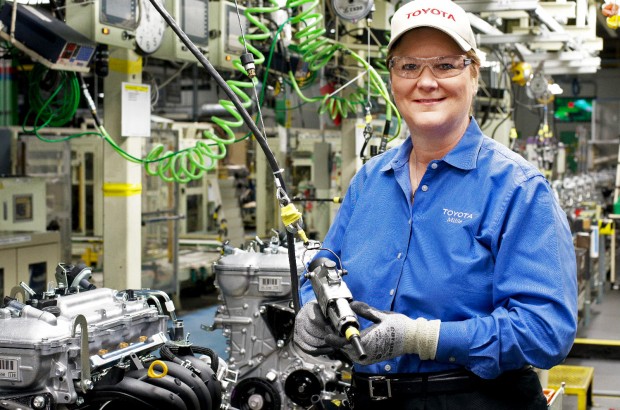 Could workboots be the new Uggs? Sisters who Step Ahead are building it for themselves, and getting some recognition.

When you ask little girls what they want to be when they grow up, the answers don’t change much from year to year. Princesses and ballerinas still take top honors, as well as veterinarians. As women get older and start to look more seriously at the working world, more practical and profitable options present themselves. Although women now occupy over half of the American work force, there are many areas that still maintain a stubbornly masculine reputation. In 2012, The Manufacturing Institute launched the Science, Technology, Engineering and Production (STEP) Ahead initiative to honor and promote the role of women in manufacturing. At present, women make up only 24% of the manufacturing industry. Part of this problem is underrepresentation—how many women do you see on TV wearing a hardhat instead of a tiara? The women who excel in the manufacturing world are true rock stars.

When the 2014 STEP honorees were announced, it was no surprise that the automotive world was well represented. Women from Toyota, GM, Ford, and Mitsubishi were all honored for their achievements. These awards honor women who rock in their manufacturing careers, and who are helping change negative perceptions of the industry.

According to Latondra Newton, Group VP of Toyota Motor North America and Chair of the STEP Ahead program, “The people you see in manufacturing today—these are skilled professionals.”

She adds, “These are people who’ve really worked very hard at perfecting a craft to the deliver the highest quality product possible for the end user. And I think we need to represent manufacturing in that reality today. “

Two of the women honored were from Toyota. One award went to Susan Elkington, Project General Manager of Toyota Motor Corporation. She is just beginning an assignment at Toyota’s HQ in Japan, after being named Toyota’s first female VP of Manufacturing for a vehicle assembly plant one year ago.

Elkington has been a champion of diversity and inclusion of women, both in Toyota and in the engineering field. She led an initiative in creating training centers throughout Indiana which helped students earn debt-free degrees while becoming highly skilled maintenance technicians.

Another honoree was another Toyota veteran of over 20 years—Millie Marshall, President of Toyota Motor Manufacturing. She was the first first female president in Toyota’s history, so she’s obviously been a great role model to other women in the industry. Her advice?

“Those who thrive in manufacturing are the women who accept and adapt to change. Don’t be afraid to try something new. Be flexible and a lifelong learner. It is not a job, but a journey.”