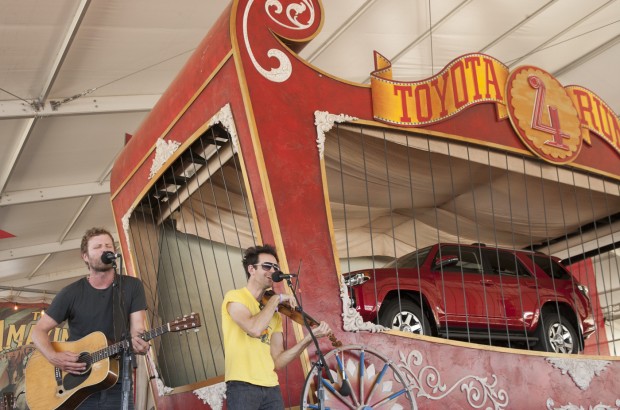 Stagecoach Festival: Woodstock in a Stetson

If you’ve never been to a country music festival, the Stagecoach Festival can be a bit overwhelming. It’s like Woodstock in a Stetson: Some 55,000 country music fans gather for three days in the heat of California’s Coachella Valley to hear nearly fifty different bands perform on three different stages. The majority of them dress in cowboy boots and cowboy hats; some don’t wear a whole lot more. Fiddles wail, steel guitars weep, and in the dry heat of the desert, the beer flows like water. Now that summer is coming to an end, and the all-new 2014 Toyota 4Runner is getting closer to being in a dealership near you, it’s time to relive the good times from this year’s show.

Toyota is a long-time Stagecoach Festival sponsor, and they’re always on hand to offer diversions from the music. Toyota provides a pavilion-full of activities; this year’s theme was the World of Wonders circus, with carnival games, a strong-man test that involved pulling a Tundra pickup, and as much Toyota-branded swag as the visitors could carry. There was also an off-road course where attendees — those who haven’t been drinking, that is — can take a Toyota-branded off-roader out to play in the dirt. (Folks who have already started in on the beer are invited to ride along as a passenger.) It’s a nifty opportunity to see just how far off the beaten path Toyota’s pickups and SUVs can actually go.

This year, Toyota chose the Stagecoach Festival to reveal the updated 2014 4Runner SUV. Those who happened by the pavilion early were treated to a circus side-show, complete with ringmaster, sword-swallower and contortionist, followed by the main act: An up-close-and-personal acoustic performance from Dierks Bentley. The country super-hunk performed a mini-set that included hits like “Am I the Only One” and “5-1-5-0” for a crowd of fans just a few feet away — far closer than they can get to the main stage.

Members of the audience were also the first to see the new 2014 Toyota 4Runner, revealed with auto-show fanfare in a giant circus cage. The 4Runner is Toyota’s go-anywhere SUV, and this year it gets new, more aggressive front and rear fascias and an updated interior. The 4Runner is the hardcore off-road member of Toyota’s SUV and CUV family, and the chunky new looks are designed to emphasize its real-world off-road skill. The new 4Runner was right at home amid the cowboys and cowgirls at Stagecoach.

The Stagecoach Festival wasn’t cheap; tickets cost $239 for general admission, with close-in reserved seats running as high as $1,100, and you need an RV or a hotel room if you’re going to stay for the whole thing. But if you’re a country music fan, it’s the place to be. Bring water, sunscreen, money and people you love — and don’t forget your cowboy hat.

all photos by Aaron Gold