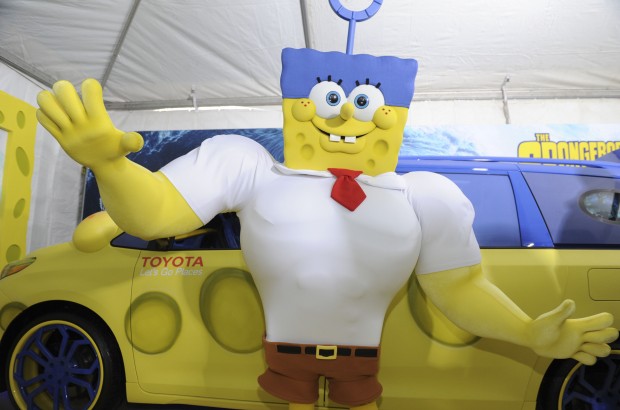 Ever notice how some Hollywood celebs never seem to age? One such star has new movie that debuted this weekend to cheering crowds. SpongeBob: Sponge Out of Water debuted this week to a whole new generation of fans. SpongeBob is as wide-eyed as ever, and seems to have buffed up considerably since we first saw him sixteen years ago. And how many other 16-year-olds are cool enough to have a one-of-a-kind Toyota Sienna made in their likeness? Not many! SpongeBob has become our all-time favorite ocean-dwelling invertebrate.

Need more SpongeBob than you can get at the local cineplex? The SpongeBob Movie-themed 2015 Toyota Sienna will bring SpongeBob’s brand of nautical nonsense to several family-friendly locations, including select Bass Pro Shops across the US, Nickelodeon Suites Resort in Orlando, Nickelodeon Universe at Mall of America in Minneapolis, the Chicago Auto Show, and the New York Auto Show. These events will feature character meet-and-greets, photo opportunities, giveaways and more.

SpongeBob fans can log onto www.nick.com/sienna to get more information on tour stops and access a gallery of images of the SpongeBob Movie vehicle. Users can log on to the site for more SpongeBob fun and activities, including quizzes, a comic creator and videos.

Check out these photos of the 2015 Toyota Sienna SpongeBob Edition on display at the world premiere of the SpongeBob Movie: Sponge Out of Water, at the AMC Lincoln Square in NYC.