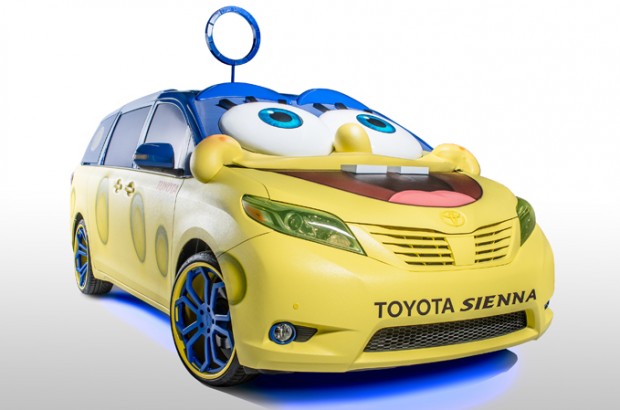 You won’t have to go to Bikini Bottom to get some quality time with SpongeBob–the all-new custom SpongeBob Toyota Sienna will be bringing the fun to a Krusty Krab near you.

He’s come a long way from that pineapple under the sea.

Everyone’s favorite sea-dwelling invertebrate is getting ready for a very big year. With a new movie debuting in February of 2015, SpongeBob’s land form (which happens to be a 2015 Toyota Sienna) is touring the country, leaving a stream of bubbles in his wake. The one-of-a-kind SpongeBob mobile features a custom 3D SpongeBob SquarePants exterior, complete with the character’s Superhero Incredibubble mask that blows real bubbles at the top of the car. Inside, there’s seating inspired by each of SpongeBob’s pals, along with a wood-grain dashboard, a custom Captain’s steering wheel, a blue-sky head liner and a sand-inspired floor. It was unveiled in November at the LA Auto Show.

The SpongeBob Toyota Sienna will have its own custom channel on nick.com and promoted through TV and and social media. Beginning Dec. 15 fans can log onto www.nick.com/toyota to get more information on tour stops and access a gallery of images of the SpongeBob Movie vehicle. On Jan. 5 users can log on to the site for more SpongeBob branded fun and activities, including quizzes, a comic creator and videos. Additionally, through Jan. 19 kids and families can log onto the site to enter a sweepstakes for a chance to win a trip for a family of four to the SpongeBob Movie: Sponge Out of Water premiere.

One Response to “SpongeBob Toyota Sienna Goes On Tour”