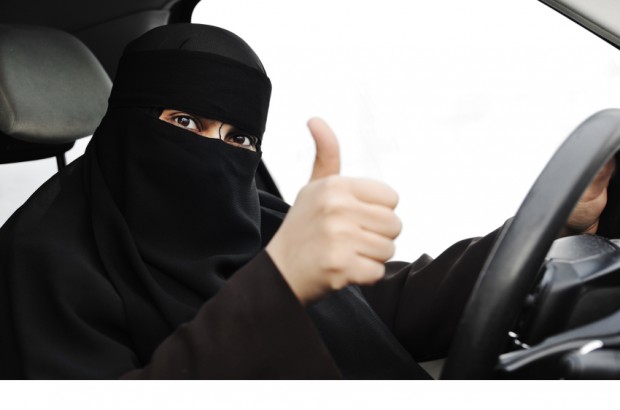 As Vroomgirls, our right to drive a car is as dear to our hearts as our right to life, liberty, and the pursuit of happiness. Saudi women drivers say it’s their right, too.

Early Saturday morning, Mai Swayan, mother of two, drove to the supermarket, bought milk, and drove home. This made her Saturday morning similar to Saturday mornings of moms all over the world. What made it extraordinary, though, is that she lives in Saudi Arabia—the only country in the world that bans female drivers. Although not explicitly illegal, driving for women is a violation of one of the most stubborn social codes in the Saudi’s conservative society. Because of the ban, women are not issued driver’s licenses.

It is the view of the highly conservative and religious authority figures in Saudi Arabia that allowing Saudi women drivers could lead to a low birth rate, damage women’s ovaries, encourage lasciviousness, cause the breakup of families, and lead to excessive spending on beauty products(!). On Saturday, October 26, in an organized protest against the ban, a few dozen women got behind the wheel anyway. Some reported being followed or harassed, but others drove without opposition.

Women in Saudi Arabia have been protesting the driving ban for over twenty years. The right to drive legally has slowly been gaining public approval—even the current monarch of the Saudis, Abdullah, has some liberal views that might hint of favoring a lift on the ban. Also, many Saudi men have voiced their approval at allowing women to drive. One male social activist released a satirical spoof video with a unique twist on Bob Marley’s ‘No Woman, No Cry’. Within hours, ‘No Woman, No Drive’ had been viewed over 140,000 times.

To get the message out to the world and their fellow Saudis that this protest was happening, women began posting videos of themselves driving cars online. Aziza al-Yousef, who is in her 50s and teaches computer science at King Saud University, is a key organizer of the what they called a ‘drive-in’. Saturday was the date for a national road rally, organizers also encouraged women to just get behind the wheel any time. These women are not promoting a revolution—they just want the right to drive and go about their lives. This video, posted by the Middle East Media Research Institute, shows a Saudi woman driving fearlessly, in defiance of the ban, and encouraging other women to do the same. You go, Saudi Vroomgirl! We salute you.