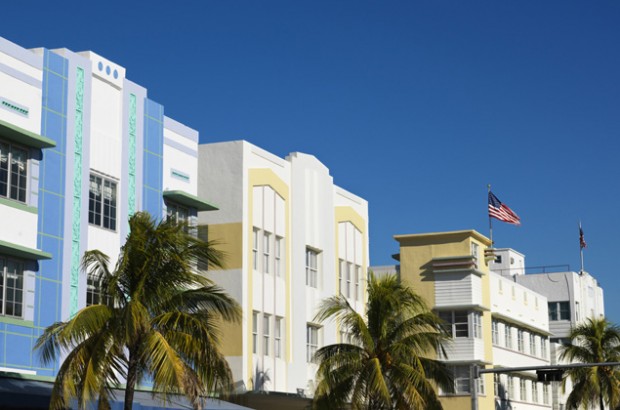 Miami’s pan-Latin culture oozes sensuality in the decor, food and sexy vibe that permeates every facet of the city.

Brush Up On Your High School Spanish

Mint leaves muddled in lime juice. With a sugar cane stalk, I stirred them lazily within a white rum concoction that had been placed before me in a tall, skinny glass. Slightly citrusy, with a sweet jolt, the mojito—which, 10 years ago, I hadn’t heard of—seemed the perfect pairing for a sultry South Beach evening. Dining al fresco, somewhat removed from the beaten path in a city section dubbed Española Way, we’d ended up in a Cuban café, sandwiched among art galleries and a quirky hostel.

This, in contrast to the art deco-influenced streetscape of Collins Avenue, was a refreshing foray into the less glossy side of Miami. And I loved it. You see, stepping into Miami is quite akin to leaving the country. Infused with a pulsing Latin beat, this Atlantic coast hangout, anchoring the southeast corner of Florida, is heavily influenced by Hispanic culture. In fact, there were times while speaking English, I felt like a foreigner … I now know that, according to the 2000 Census, two-thirds of residents cite Spanish as their first language.

The meld of cultures, combined with a sizzling climate and coastal geography, are responsible for Miami’s reputation as the home of all things hot. Beautiful beaches. Exotic cars. Drop-dead gorgeous people. At every turn. If you’re seeking out a sexy locale, this is it. But that’s not to say there isn’t an itinerary for every type of traveler. Miami doesn’t discriminate.

This 10-block shopping Mecca, Lincoln Road is a bustling pedestrian esplanade. With restaurants, galleries and boutiques, this city section—closed off to vehicles—is prime for aimless strolling and window shopping. IceBox Café (1657 Michigan Ave.) has a delectable Sunday brunch; but don’t miss 4-D Gelato (670 Lincoln Road), where a scoop of the Limone flavored Italian ice cream can produce tears of happiness. In the evening, the nearby New World Center ExoStage at the Miami Beach Soundscape (541 Lincoln Road), free movies play on a 7,000-foot projection screen with vast, grassy knolls that are perfect for picnicking.

If you’re planning a low-key escape to South Beach or a girl’s weekend, you’ll find Lincoln Road an ideal spot to settle down. Luckily, the Ritz-Carlton (rates start at $379 per night), a complete restoration of the 1953 Morris Lapidus-designed landmark DiLido Hotel, anchors the road’s end. At the hotel’s oceanfront DiLido Beach Club restaurant, sangria ranks among guest favorites, and a pitcher goes a long way.

Collins Avenue, known as Millionaire’s Row, is also home to some of Miami Beach’s trendiest hotels and hot spots. Fontainebleau Miami Beach (rates start at $219 per night), another Lapidus masterpiece, was the most luxurious beach hotel when it opened in 1954. Today, it’s just as grand, with a new 40,000-foot spa and more than 1,000 guest rooms. Or, for an edgier vibe, try the Shore Club (rates start at $330 per night), whose minimalist lobby, awash in white, is spectacular, if not a tad intimidating. For serious exclusivity, check out the hotel’s Skybar, a Moroccan-themed hideaway that’s buzzes until the early hours. Over at the Delano Hotel, The Florida Room, designed in part by crooner Lenny Kravitz, enjoys similar status while remaining one of the area’s well-kept secrets.

If you’re the clubbing type, you’ve got to get yourself to Mynt Lounge (1921 Collins Ave.) where scene-makers trod heavily. The well-known club undergoes full renovations annually to cement its hipster status … and the tactic works. To get through the velvet ropes of Mynt, or any other of northern Miami Beach’s clubs, you’ll want to play nice to your hotel concierge.

Not far south of Miami, you’ll stumble upon Biscayne National Park, 95 percent of which is water. For a peek at the mesmerizing coral reefs that live beneath the water, you can board a glass-bottom boat ((305) 230-1100 for details) or rent a canoe or kayak to paddle at your own pace.

When the temperature drops in the northern U.S., it remains perfectly pleasant in Miami. Between the months of December and early April, visitors can expect temperatures in the 60 to 80 degree range. Avoid rainy season, the worst of which is in August and September, but expect great vacation deals if you can bear the hottest summer months.

• Pack plenty of swimsuits, but if you’re traveling in the winter season, don’t forget a few long-sleeve sweaters or light jackets for the evening.
• Use Google Map’s “Street View” feature to get a feel for the area your hotel is located in. Just like any major city, you’ll find plenty of less desirable locations in town, too.
• If you’re renting a ride, beware of the downtown freeways where traffic is notoriously aggressive.