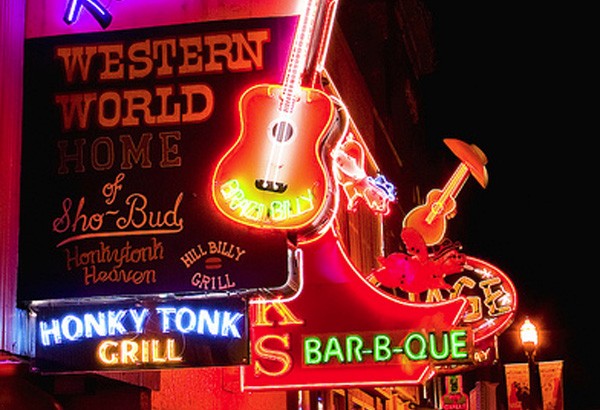 Pull on your cowboy boots and crank the radio. A drive through Music Row promises to be as memorable as it is melodic.

The neon sign reads: “Loveless Motel and Café. Hot biscuits. Country ham.” Standing beside the retro signage, I hear the fluorescent tube bulbs give off a sizzle, then watch as they fade and regain their brightness, but nobody else notices. Wafting from the café, the scent of fried chicken, luring diners through the front door at a steady pace. Amid the stream of hungry patrons, I spy a glass case filled with an array of whipped cream-topped pies. I glance back at the sign; it might as well read “Welcome to Nashville. Dieters, beware.”

This, my friends, is a city that’s mastered the art of southern cooking in all of its buttery glory. Yet, when you think of Nashville, you most likely immediately conjure images of country crooners. I’m here to let you in on a secret. It’s much more than that.

NASHVILLE IS A CITY OF DREAMERS

Take for instance, Lon and Annie Loveless who launched their buttermilk biscuit operation—Loveless Café—in 1951, peddling homemade jam and biscuits set atop roadside picnic tables along U.S. Highway 100. Today, somewhere between 4,000 and 7,000 biscuits are baked daily, supporting a bustling restaurant and a healthy mail-order business. Funnily enough, stepping into the diner feels just like I imagine it always has: warm, inviting and severely hunger-inducing.

So order up some of that fried chicken and a side o’ marinated cucumbers and onions. To get a real sense of this city, you’re going to need to start with a meal that’ll stick to your bones.

WHERE IT ALL BEGAN

Why not begin your journey where so many others did? Along Music Row in downtown Nashville, you’ll find legendary RCA Studio B, where, if you look closely enough, you’ll see a patched brick wall … the one that Dolly Parton accidentally drove through as she hurried into her first recording session after signing with label. (Whoops!) It’s in this unsuspecting studio that more than 1,000 “Top 10” American hits were recorded, including 200 plus songs by the hip-swiveling King himself, Elvis Presley.

Needless to say, RCA’s Studio B is an ideal starting point if you’re looking for the Cliff’s Notes version of country music history, from honky tonk’s humble beginnings to present day. Tours depart daily from the Country Music Hall of Fame and Museum, which is also worth a peek. Artifacts —like June Carter’s modest stage frocks and Jimmie Rodger’s 1928 Weymann guitar—provide an even clearer glimpse into the lives of the genre’s founding artists.

SCORING THE BEST SEAT IN THE HOUSE

Today, the musically inclined continue to flock to Nashville for a shot at fame. Like the string-plucking performers of yesteryear, they’re modern day dreamers. And lucky for us, it makes for easy-to-find (and affordable) entertainment.

In Nashville, what appears to be a standard dive bar, may just turn out to be the best venue you’ve ever visited. Hole-in-the-walls like The Bluebird Café, a 100-seat “listening room” tucked into a strip mall, play host to songwriters and up-and-coming stars nightly. Years ago, an unknown Garth Brooks performed here during open mic night. (Make reservations online and expect a cover charge around $10.)

In the heart of the city, the purple-painted Tootsie’s Orchid Lounge is a more raucous bar-turned-legacy that touts a long list of big names like Willie Nelson, who scored his first songwriting gig after stepping onto the stage. If The Bluebird is the place you begin your night, Tootsie’s is the place to end it.

The Grand Ole Opry—the granddaddy attraction of Nashville—has been around since, well, the beginning of commercial radio. And it’s still going strong. If you’re a subscriber to Sirius XM satellite radio, you need only punch in channel 56. But if you’re in Nashville, you can actually snag a seat every Friday and Saturday at the live shows. A slightly uncomfy pew bench to be more accurate, but a seat just the same.

The storied past of the Opry involves six different buildings, and maybe even a touch of bad luck, but today, the cavernous venue—whose acoustics are said to be second only to the Mormon Tabernacle (far surpassing even Carnegie Hall)—has called the same place home for nearly four decades. Last year, when Tennessee floods swept through the state’s interior, roughly four feet of water covered the stage, including the six-foot oak wood circle, seamlessly inlaid in the stage, that pays homage to Opry’s former home at the Ryman Auditorium. For the full scoop on the Opry’s past, you can take a behind-the-scenes tour of the space, and also the Ryman, if you favor the tunes of a bygone era. (Scout out the calendar of performances here.)

My only gripe about the Opry is that it’s not remotely roomy enough to shake a leg, let alone some booty. If you’re looking to kick a boot, you’ll want to mosey into downtown Nashville, in what was once an old warehouse, where you’ll find the Wild Horse Saloon. Unapologetically tourist-driven, this massive dance venue serves up daily live music, line dancing lessons and some mighty fine fried dill pickles. Once you’ve downed a glass of the bar’s signature Tennessee Nectar, served in a glass cowboy boot, naturally (not kidding), you’ll undoubtedly be game for a dance or two.

When in Rome, right?

• Plan your road trip for March through May, just before the Southern summer heat kicks into full gear. You’ll want to slip behind the wheel of something smooth and reliable, but not too pretentious. This is truck country, after all.
• Since you’re driving, consider booking a room at the stunning Gaylord Opryland Resort, just outside of town, where a river actually runs through the 2,881-room mega hotel. With nine acres of indoor gardens, dining and a 20,000-foot spa, it’s an experience within itself. Or, for a more conveniently located stay, check out The Wyndham Union Station, which was originally built as the city’s main train station.
• If you have your heart set on seeing one of Elvis’ studio haunts, extend your road trip to include Memphis, Tenn. Approximately three hours west, you’ll find the city that lays claim to blues, soul and rock ’n’ roll.