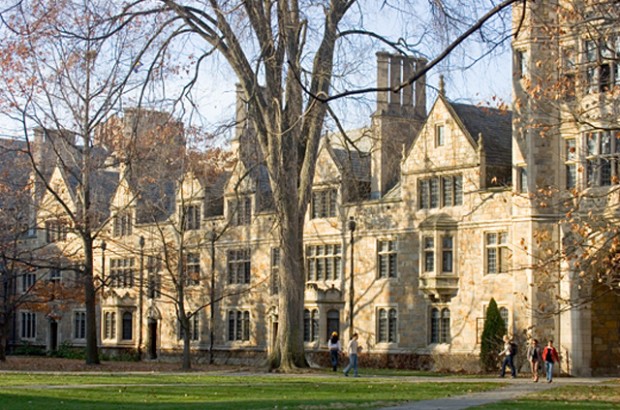 A city mom loads up the Flex and heads for a Midwest college town with her daughter in tow. Memories are made, chips are eaten, and another semester gets underway.

Back to school, Wolverine style

I admit that I am overly compulsive. Here’s an example: I started planning my daughter’s fall return to the University of Michigan before she had even touched down in NYC for summer break.

It’s like this: I’m an automotive writer and the trip is all about the ride. I could tell you what we drove to Maryland for Thanksgiving two years ago but I can’t remember where we stayed or who was there.

The trip from NYC to Ann Arbor is 613 miles, an estimated 10 ½ hours. I needed a vehicle that would take to the highways. My qualifications: styling, power, comfort and space. I reserved the Ford Flex. It has funky urban appeal, plenty of power in a 3.6 V6 Ecoboost engine (meaning lots of boost), lower emissions, 23 mpg on highway, a relaxed interior and space for seven.

And it has an interesting history. The story goes that J. Mays, Group Vice President and Chief Creative Officer for Ford, was discussing vehicles with a fashion designer who said that he wanted a stylish “people mover” to jet out to the Hamptons in New York. That was the beginning of the idea for the Flex, named the Fairlane in concept stage.

The 7-passenger vehicle that was introduced in 2009 doesn’t fit into a specific category. It’s not a mini-van, an SUV or a wagon. It has a distinct square-like retro look with side grooves, wide windows, contrasting roof colors and three rows of glass overhead. Inside, the Flex feels like, as one friend noted, “an urban loft on wheels.”

I don’t need a long list of amenities, but the ones that will take me the distance include the cap-less fuel system, which is great because I’m a klutz and this keeps me from getting gas all over myself. There’s ambient lighting around the cup holders and in the foot wells that changes colors at the flip of a switch. There is also an available refrigerator/freezer in the middle row that holds up to seven 12-ounce cans and cools 40 percent faster than a typical refrigerator. (There’s also a freeze mode that plunges down to 23°F). And yes, there’s Ford SYNC that will do everything but button your shirt. Even for my savvy kids, the system is frustrating. It requires a learning curve and doesn’t always do what you want it to do. In other words, not transparent like my beloved iPhone.

Back to the trip. When I told my daughter Jenna about the ride, she told me that it wasn’t big enough for her, and she named a few other choices that she preferred to profile in. What can I say? My daughter has been test-driving cars with me since she was three years old and has plenty of opinions. But the game was off. I simply told Jenna that if she didn’t like the Flex, she could get herself back to college… alone!

One Response to “Road Trip: Ann Arbor or Bust”