Chic, sleek and sophisticated, the 2014 Volkswagen Touareg TDI R-Line is a choice family crossover that, while pricy, looks a whole lot more expensive than it is.

It’s a diesel! That means it offers excellent torque (big power even from a standstill) that’s superior to a gasoline engine of a similar size. And in theory, diesels give excellent fuel economy. But the 2014 Volkswagen Touareg TDI R-Line is somewhat heavy, and it has impacted the car’s EPA figures – 20 mpg city/ 29 mpg hwy. I wish this Touareg got better gas mileage (especially since you’ll pay more at the pump for diesel fuel) but I applaud the vehicle’s power, especially noticeable in first and second gears.

The 2014 VW Touareg TDI R-Line has standard all-wheel drive, which provides superior control in wet/snowy/muddy conditions, as well as better handling in corners during dry conditions. An “On-Road” and “Off-Road” dial provides different levels of traction. Don’t be coerced into thinking the Touareg R-Line’s luxury appointments detract or diminish from its extremely capable all-road abilities. The Touareg is an excellent vehicle choice for those who live in areas with bad weather and difficult road conditions.

The Touareg TDI R-Line is a five-seater loaded with fancy gizmos that ordinarily would cost extra. A panoramic sunroof stretches to bathe the backseats in sunlight. But an annoying mesh cover – rather than an opaque shield – allows overhead sunshine to come blindingly into the cabin. It’s great when the sun is at an angle, but distracting at high noon. A multi-function perforated leather steering wheel is thick and substantial in hand. It keeps controls at your fingertips for Bluetooth wireless connectivity, cruise control, audio system, cool-looking aluminum pedals (including an oversize dead pedal on which to rest and brace your left foot) and the Touareg’s on-board computer (which diagnoses problems like low tire pressure, and gives a readout of the vehicle’s current fuel efficiency.) There’s even a speed warning, which beeps to remind you when you exceed a pre-set limit. Great for teens!

Families will love the roomy and versitile backseat, with dedicated A/C vents, a 12 V plug to recharge electronics, and fold-down-flat seats which split into a 40-20-40 configuration, so that skis and rolled up items like rugs can fit through the center pass through (the 20% split), white two people are still able to be seated on either side.

VW offers an optional service called Car-Net, which is free for six months, and then $199 for an annual subscription. It provides automatic crash notification to a central call agency, which will summon help in the even of an accident; roadside assistance, and stolen vehicle location assistance. You can also schedule a dealer maintenance visit, get your vehicle’s health status with a diagnosis of anything that’s wrong with the car, and even set speed and boundary alerts so that your teenager will be “outed” should they drive over a set speed limit or venture outside a set geographic area.

The new easy-open tailgate means you simply pass your foot underneath the vehicle’s rear bumper to open the cargo door. No more fidgeting for key fobs while your arms are double-loaded with groceries.

Excellent acceleration and power on command. Tap your foot on the gas and merge with ease into highway-speed traffic. In addition, the taut sport-tuned suspension makes driving on twisty mountain roads a pleasure. Stays tight in corners even at a high speed.

Spare tire included! It may not seem like much, but many manufacturers (including brands like Hyundai and Kia) are removing spare tires to save money and reduce the weight of the vehicle. This allows companies like Hyundai and Kia to quote better fuel economy figures, since the vehicles are lighter, and to charge a bit less. In the tires place, some companies are providing so-called “flat-in-a-can” to repair a flat tire. But should you experience a total blow-out, rather than just riding over, say, a nail, then this “flat-in-a-can” is useless. I say, thank you VW, for still providing a spare tire. It’s a huge safety feature! 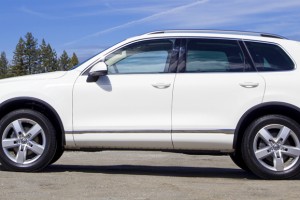 The 2014 VW Touareg TDI R-Line adds panache to an already rockin' crossover/SUV. Men and women will spark to its clean lines, abundance of standard features, and excellent ride quality. The downside is that this TDI diesel requires the pricier diesel fuel, yet produces lackluster fuel efficiency for a higher cost.

Easy liftgate - pass foot underneath and it opens!