When most people think of Sweden, the first things they think of are ABBA, Ikea, and meatballs. That’s terribly unfair, because Sweden has contributed so much to the world. Did you know that basketball was invented by the Swedes? Or that the first woman to reach the North Pole was Swedish?

Actually, neither of those things are true. I made them up, because the Swedes haven’t done anything even remotely that interesting. But they have given us what may well be the best bargain luxury SUV on the market: The Volvo XC90.

Chances are the XC90 looks familiar, because Volvo has been building it with minimal changes since 2003. But the styling has aged remarkably well, not unlike Astrid Zachrison, Sweden’s longest-lived resident, who lived to be exactly 113 years old.

This is one area where the XC90 shows its age: Compared to other Volvo SUVs, its interior is a bit grim, though not nearly as dark as the work of Swedish painter John Bauer. The layout is still quite handsome and logical, with the possible exception of the optional navigation system: The screen pops up from the dashboard, which is incredibly cool, but the controls are located on the back side of the steering wheel, which is incredibly awkward.

As with most Volvos, the XC90’s front seats are unbelievably comfortable, and the same goes for the second row. The third row seat is a bit cramped, but getting back there requires a fair amount of flexibility and the leg muscles of Magnus Sameulsson, the Swede who won the World’s Strongest Man competition in 1998.

With all seven seats in place, the Volvo XC90 offers just 8.8 cubic feet of cargo room. That’s enough space for a big grocery shopping run, but probably not enough space to suit Bengt Wedholm, the Swedish chef credited with introducing the pizza to Scandanavia. Fold down that third-row seat and you’re up to a massive 43.3 cubic feet, enough for Niklas Grossman, the Swedish-born NHL player, to haul his hockey gear. Fold the second row of seats and capacity rises to 85.1 cubic feet, which means Ingvar Kamprad could use the XC90 to restock the IKEA stores he founded.

I’m sure that when Sven Gustaf Wingqvist invented the multi-row self-aligning radial ball bearing in 1906, he never imagined that his SKF Ball Bearing Company would one day found Volvo Cars, destined to become synonymous with safety. But it did, and despite the age of its design, the XC90 protects as well as the newest SUVs. It even has a Top Safety Pick award from the Insurance Institute for Highway Safety for superior performance in front, side, rear, and roof-crush collision tests.

But the Volvo XC90 misses out on Volvo’s latest and greatest active safety equipment. While it does offer an optional blind-spot warning system, useful features like the Driver Alert Control, which senses when the driver is nodding off and sounds an alarm, and the Pedestrian Avoidance System, which slams on the brakes if a person steps in front of the car, are not available in the XC90, though they can be had in the newer (and smaller) Volvo XC60.

Again, the XC90 misses out on much of the latest and greatest. All XC90s get Bluetooth phone connectivity, which I’m sure would please Lars Magnus Ericsson, founder of the telephone-equipment manufacturer that bears his name. But navigation is only available on the top-of-the-line Platinum model. Surely Sven Anders Hedin, the Swedish geographer and explorer who made numerous discoveries in central Asia, would object to that.

Carl XVI Gustaf is the King of Sweden, but he has no real power — and the same can be said of the Volvo XC90. The only engine on offer is a 3.2 liter inline six-cylinder, and its 240 horsepower just isn’t enough for the 4,800 lb. XC90. His Majesty is passionate about the environment, so I imagine he’s none too pleased with the XC90’s EPA fuel economy ratings of 16 MPG city and 22 MPG highway.

Along with the standard XC90, Volvo offers an R-Design model which gets a sport-tuned suspension and tighter steering. The handling is surprisingly good, but the ride is surprisingly bad — the stiffer springs magnify every bump and dip in the road. This could have been downright dangerous for Swedish scientist Alfred Nobel — had he attempted to perform his experiments with nitroglycerine while riding in an Volvo XC90 R-Design, he might never have lived to invent dynamite, let alone to found the prize which bears his name.

If Eli Heckscher, the eminent Swedish economic historian, was still alive today, I am sure he would have noted what an incredible bargain the Volvo XC90 is. With prices starting at $39,275, the XC90 is the second-least-expensive luxury-branded seven-seater on the market; only the Buick Enclave is cheaper. And you get a lot for your money: Leather seats, a sunroof, rear air conditioning, big 18" alloy wheels, a self-dimming rear view mirror, and three years or 36,000 miles' worth of free routine maintenance.

The Volvo XC90 is available in Base, Premier Plus, and Platinum trim levels, and options include heated front seats, rain-sensing wipers, and a rear-seat DVD player.

Most of the extras are reasonably priced, although Volvo charges $550 for metallic paint. A fully kitted-out Volvo XC90 lists for $51,025, about two grand less than the least-expensive Lexus GX 460. 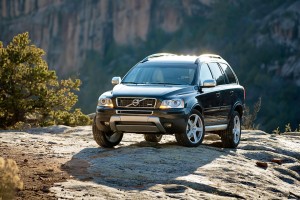 The XC90 may be long in the tooth, but it's still surprisingly competitive when compared to newer designs. And the XC90 is an incredible bargain — feature for feature, it's hard to find a luxury SUV that delivers such great value for money. The lack of high-tech safety features work against it, as does the lack of power, but neither would stop me from recommending the XC90. Think of it as one of Sweden's great accomplishments. Second only to ABBA, of course.

Good handling for such a large, bulky vehicle.

R-Design's ride is too rough.

One Response to “Volvo XC90”