The Volvo XC70 bridges the gap between old-school family wagon and modern-day crossover utility vehicle, and does it exceptionally well.

Back when I was twenty-five, if you asked me what I thought the ideal car was, I probably would have said a Miata or a Mustang convertible. Now — fifteen years, two kids, and several thousand dollars of debt later — I’d say it’s the Volvo XC70. Is it sexy? Of course not. Neither are nursing bras or stretch marks, but this is the price we pay to procreate. Give me a few minutes of your time, and I’ll explain why the 2012 Volvo XC70 is my motoring ideal.

Volvo created the XC70 a few years back by taking the V70 station wagon and butching it up with a beefier suspension and color-contrasting body trim, similar to what Subaru does with the Outback. Buyers liked the look well enough that Volvo has since discontinued the stodgy V70. But while the
Volvo XC70 may sport tats and a flannel shirt, it’s still a wagon at heart — and that’s what I love about it.

Parenting takes a lot out of you — well, it takes a lot out of me — and I think we deserve all the rest we can get. (I’ve been known to take micro-naps when my kids pause between sentences.) So that’s why I like the Volvo XC70 interior: It is properly luxurious (but not over-the-top opulent), logically laid out, and very quiet, an oasis of peace in a desert of kids yelling about who stole whose iPod.

And I absolutely love the Volvo XC70 seats. I have no idea how Volvo does it: We live in a world of six billion unique butts, and yet every single one seems to fit comfortably in the V70. My test drive included a marathon road trip from California to Colorado, just shy of a thousand miles over two long days, and I emerged with nary a complaint from even the most persnickety of my vertebrae.

Cars don’t get much more family-friendly than this. The roomy back seat accommodates car seats and high-school-age linebackers with equal ease. Most modern-day wagons skimp on cargo space in the name of style, but not the XC70: Its 33.3 cubic foot cargo bay is bigger than most mid-size SUVs. With the back seats folded down, the XC70 can carry 72.1 cubic feet of cargo, enough to relocate a small village.

Safety? Heck, that’s Volvo’s middle name. (Volvo’s full name, in case you didn’t know, is Bjorn Gustav Safety Volvo Haeegershmidt. Now you know why it prefers to go by just Volvo.) The Volvo XC70 has advanced safety technology, like the optional Pedestrian Detection system, which can sense a person stepping out in front of the car and automatically apply the brakes. Unfortunately, it’s not all good: Volvo’s lane-departure and collision warning systems have such a hair trigger that I ended up turning them off; the distraction from the too-frequent alarms seemed like more of a threat than slamming into the back of a slow-moving bus.

The Volvo XC70 is a bit shy on fancy gee-gaws inside the cabin, but the aforementioned safety technology is pretty impressive. Volvo’s City Safety and Pedestrian Detection systems uses a combination of radar and a camera system to detect vehicles and people in front of the car. If they detect an imminent collision, the brakes are automatically applied, and at lower speeds the XC70 can actually stop itself. I actually know someone who had his bacon saved by a Volvo. He was pulling away from the curb, looking over his shoulder, and didn’t notice a person who had stepped in front of the car — but the pedestrian-detection system did, stopping the car, saving the pedestrian from injury and my colleague from a nasty vehicular-assault charge.

The Volvo XC70 is offered with a pair of six-cylinder engines. The 3.2 liter 240 horsepower engine is perfectly adequate, while the 325 horsepower turbocharged 3-liter T6 is perfectly adequate for those of us who still yearn for a Mustang. Fuel economy is not spectacular; the 3.2 is rated for 18 MPG city and 25 MPG highway with front-wheel-drive, 18/24 with all-wheel-drive, while the T6, which comes exclusively with all-wheel-drive, is rated for 17/22. But both engines run on cheap 87 octane, though, and thanks to a gas tank roughly equal in size to Lake Ontario, the XC70 can go long distances between fill-ups.

Handling is sharp and secure, but in order to give the XC70 proper off-road ability, Volvo has fitted a marshmallow-soft suspension that, while providing an extra-comfy ride, wallows up and down on really rough uneven roads. All for a good cause, mind you: When equipped with all-wheel-drive, the XC70 will pick its way through mud, rocks and shallow streams that no regular car could even think of approaching. Still, since most SUV owners do not do any serious off-roading, it would be nice if Volvo offered a stiffer suspension option that improved the handling a bit.

Volvo has adopted a new (and somewhat complex) trim level system for 2012. First, pick a powertrain (3.2 or T6) and then choose your trim level: Base, Premier, Premier Plus, or Platinum. The 3.2 Base starts at $33,425, a bit more than a top-of-the-line Subaru Outback, and includes a power-adjustable driver's seat with memory, Bluetooth speakerphone, and faux-leather upholstery. Stepping up through the trim levels piles on features such as genuine leather seats, a sunroof, nicer wheels and stereos, navigation, even a power tailgate (very handy when your arms are full of groceries). Volvo XC70 pricing maxes out at $48,975, which is still seven thousand dollars less than the Mercedes-Benz E350 wagon. 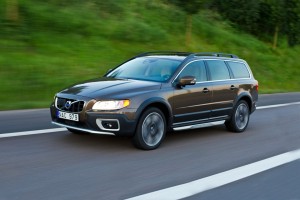 The Volvo XC70 is the all-purpose family car, with room for five and all the luggage, sports gear or art projects they can possibly carry and enough luxury to relax even the most harried parent, even for a while. Parenthood may have brought my Mustang aspirations to an end, but I'd be perfectly happy with an XC70.