The name? Volkswagen Tiguan is a blend of “tiger” and “iguana.” Fierce and fast. Well, fierce because it’s an all-around type SUV. And it was fast enough to get me out of a New Jersey traffic jam.

The Volkswagen Tiguan, the smaller sibling of the VW Touareg, is a four-door compact sports utility vehicle that will fit five. This crossover still has loads of space for everything from groceries to surf boards. Plus, it’s not too big to fit into city parking spaces. Maybe that’s why the VW Tiguan has been such a hit.

Wide doors combine with plenty of legroom and headroom allow for easy access. The cabin (or should I say greenhouse) has a light, open feeling that is enhanced by extra triangular back windows and an available panoramic sunroof that spans all rows. The tilt/slide glass ceiling is 300% bigger than an average sized sunroof and has an electrically operated sunshade that covers the entire area. Love it!

Visibility is excellent in the 2013 VW Tiguan, thanks to wide windows and ample-sized mirrors. And, the controls are within reach, easy to read and understand. The interior on the model I drove was trimmed with no-nonsense (i.e. boring) soft-touch plastics and “metal” with stitched cloth seats. Another great addition are the eight (yes, eight!) dash-mounted air vents.

The 2013 Volkswagen Tiguan was designed for activity with roof rails that will hold kayaks, surfboards, or bikes. An available towing hitch accommodates an attachment that can carry up to four bikes or can be used to pull 2200 pounds of jet skis, dirt bikes, or ATVs.

The VW Tiguan rear seat has a convenient 40/20/40 split to hold gear. With rear seats up, there are 23.8 cubic feet in load area. With seats folded forward, it increases to 56.1 cubic feet. Just a note: with the rear seats up, I was able to haul a huge load of Costco purchases in the cargo area.

The 2013 VW Tiguan has active and passive safety that earned the IIHS (Insurance Institute for Highway Safety) Top Safety Pick rating for 2011.

The nuts and bolts of it? Front and side thorax bags protect the driver and front-seat passengers. Side curtain head airbags protect the front and rear seats and belt pretensioners are in place for the front seat and rear-outboard seat occupants. The SUV is also equipped with all the goodies: Electronic Stability Control (ESC), Anti-Slip Regulator (ASR), Anti-lock Braking System (ABS), and a Tire Pressure Monitor.

Volkswagen Intelligent Crash Response System automatically shuts off the fuel pump, unlocks the doors, and switches on the hazard warning lights when a vehicle is involved in certain types of collisions.

The 2013 Volkswagen Tiguan has all the best aspects of a small SUV. The car holds all you could need for a family of four, it’s a breeze to maneuver, and it’s a go-anywhere type of vehicle. And yes, it has enough spunk to make you feel cool.
A 2.0-liter turbocharged four-cylinder generates 200 horsepower and 206 pound-feet of torque. That’s quite enough to get you in and out of traffic on the New Jersey turnpike — the main marker for my local test drives. Plus, the mpg is a respectable 27 highway and 22 city for automatic transmission models.


There are seven models in the 2012 VW Tiguan model line-up, each powered by the 2.0T turbocharged four-cylinder engine with a six-speed automatic transmission and the option of 4Motion all-wheel drive. The six-speed manual transmission is only offered on the front-wheel drive VW Tiguan S.
With a starting MSRP of $22,840, the 2.0T Tiguan S is the entry-level Tiguan. Key standard features include: a six-speed manual transmission, 16-inch alloy wheels with all-season tires and tire-pressure monitoring, Bluetooth, split-folding rear seats with recline and center armrest, cruise control, intermittent front windshield wipers, and an eight-speaker sound system with CD player.

S with Sunroof At $25,940, the S adds the fab power tilt/sliding panoramic glass sunroof and tinted windows. To note: the sunroof is a must!

SEL At a starting MSRP of $33,975 the sport-tuned Tiguan standards include keyless entry with push-button start, 19-inch alloy wheels, sports suspension, leather seating, silver-metallic interior trim, power adjustable driver seat with memory and power lumbar and Bi-Xenon headlights with LED daytime lights. For $34,695, the SEL adds on a navigation system with a 6.5-inch color high-resolution touchscreen and 30GB hard drive with voice control. At $37,780 you can get a model with 4Motion all-wheel drive, navigation system with voice control, and a Dynaudio 300W sound system with eight speakers. 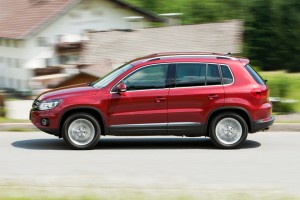 The 2012 Volkswagen Tiguan is in the same category as the Honda CR-V, Toyota RAV4, or Nissan Rogue. If you do the math, it also comes in at the top of the price range. As always, though, the VW stands on its fine heritage and laurels. Now if next go-round they’d add more pizzazz, I’d be all thumbs up.

Small enough for maneuvering around the city, it’s 174.3 inches nose to tail. It also will do the country thing with optional 4Motion all-wheel drive.

This may sound too simple-minded, but I like that it’s got the VW badge. That stands for trustworthy engineering, excellent safety technology, and a long heritage.

Yes, VW is trying to bring their prices down to fit the American market, but oh, how I wish they could make the interior of the Tiguan something to remember.

One Response to “Volkswagen Tiguan”