It drives every bit like a meticulously crafted German car but the Volkswagen Passat is American where it counts, being built largely of American parts – by American workers – and assembled in Chattanooga, Tennessee.

OMG! Here’s the big news, the 2012 Volkswagen Passat is fantastic. As a mid-size sedan that seats five comfortably, it’s a triple threat to its competition, taking them on for comfort, handling and value (see: Toyota Camry, Nissan Maxima, Honda Accord.) It comes in several engine types and sizes, so families that want cheap and cheerful can buy the base 4-cylinder model, eco lovers can opt for the turbo-diesel engine (which is the only diesel offered among mid-size sedans in the U.S.) and sport fanatics can zip along in the very quick V6 version. All VWs get three years or 36,000 miles of no-cost maintenance, a feature usually offered only with luxury marques.

The Volkswagen Passat has been around for years, but this latest iteration, completely redesigned last year, is different. It’s assembled in Tennessee, and comprised of 85 percent American-built parts. But beyond the Passat’s workforce benefits, it’s luxurious beyond its price point, is fun to drive and feels roomy in both the cabin and in trunk space.

Again, the 2013 VW Passat wins. Its interior is exemplary. It’s tarted up to the hilt with standard features like power up/down windows on all four doors, two 12V power outlets to recharge your phones, a touch-screen sound system, dual climate controls, and a leather multi-function steering wheel to control the audio and cruise control systems. No matter the trim level, the VW Passat has an upscale vibe.

The VW folks say the 2013 VW Passat has the quietest cabin in its class, thanks to a double-paned windshield and high-tech acoustic sound insulation in doors and roof support panels. I couldn’t tell if all that is true, but I didn’t notice any out-of-the-ordinary annoying wind or road noise.

The American Passat is four inches longer than its European cousin, and three-quarters of that is found in improved legroom. The interior is very comfortable and quiet, with a euro-chic minimalism to the design. Many of the touchable materials are soft-touch rubber and have a luxe, upmarket feel.

Some optional extras are taken directly from VW’s luxury badge: Audi. The optional ambient lighting floods the footwells and doors with a soft light, kind of like a theater. It’s the same posh lighting found on Audi’s flagship A7. There’s also an available remote start button, but I prefer a good old fashion key. A third sidelight window on rear doors gives added natural light inside the cabin.

The 2013 VW Passat was conceived and built especially for the American market. This means that safety features are key. It comes standard with six airbags (including front and backseat side curtain airbags), daytime running lights, and a tire pressure monitoring system.

Should the VW Passat be in a major accident, the Intelligent Crash Response System automatically unlocks all doors, disconnects the battery terminal from the alternator cable, shuts off the fuel supply and turns on the warning hazards and interior lights.

I was able to test all the Volkswagen Passat models, from the base model on up to the VR6 engine SEL Premium. The ride quality is excellent, no matter the engine type or trim level. Handling is confidence-inspiring and fun. I like the tighter steering, which requires fewer turns of the wheel to corner, and feels more precise than other mid-size sedans.

The German-built 3.6L, VR6 engine on the Passat’s 3.6L SEL Premium model is so quick that it boosts the Passat into luxe Audi territory (VW’s luxury brand.) If there hadn’t been a VW badge slapped on the steering wheel, I wouldn’t have remembered that I was driving a VW instead of the pricier brand.

A turbo diesel version turns this ample mid-size family car into an eco-friendly gas sipper, getting a substantial 43 mpg on the highway, while still offering the drive quality of a Euro-built internal combustion engine rather than a softer, less spirited hybrid ride. Though we weren’t able to confirm it, VW states that the Passat TDI (turbo diesel model) can cruise up to 795 miles on a single tank.

All Volkswagens, including the Passat, come standard with no-cost maintenance, which includes oil changes, tire rotations, general tune-ups for three years or 36,000 miles.

Bluetooth connectivity for hands-free phone usage is standard, as are dual climate controls, which the Honda Accord and Toyota Camry don’t have. 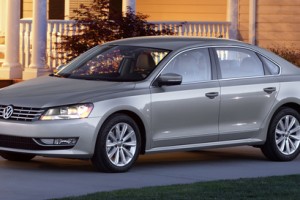 VroomGirls loves Volkswagen for its drive quality, style and overall attention to detail. The 2012 VW Passat is no exception. It comes in 15 different versions, so there's bound to be one you'll like.

Somewhat cheap-feeling interior plastics on the base model