I’m a Jetta fan from way back, even when VWs didn’t run so well. My first new car was a VW Jetta, but it was plagued by mechanical issues. Those days are long gone. Volkswagens are solid, well built machines nowadays. They are tight, fun to drive, sporty. Jetta, the brand’s compact sedan, is roomy and practical. Key competitors are the Toyota Prius, Honda Insight and the Ford C-Max.

Volkswagen is all about contemporary, clean design. Heavy wood trim and overdone gadgetry, which sometimes clutter Japanese and American interiors, just isn’t found in a VW. And so it is with the 2012 Volkswagen Jetta Hybrid. My tester had brushed aluminum trim, chrome-trimmed switches, a soft-touch dashboard and a pretty, inviting three-tone color scheme of black, silver and tan. Modern, appealing, and timeless.

Tall drivers will feel comfortable, as there’s great foot and legroom. Also, plenty of legroom for backseat passengers, though headroom is a bit compromised in the back for especially tall riders. The sunglass storage compartment over the rear-view mirror is handy. Also great is the extra 12V power outlet for backseat passengers, though I was disappointed not to see A/C vents in the back. What, backseat riders don’t get hot? Trunk space is somewhat reduced compared with Jetta’s gasoline version, since the hybrid motor’s battery pack has to fit somewhere. To make up for it, the backseat bench folds down to accommodate longer items.

I like the separate climate control dials and buttons that aren’t connected to the touch screen – all the easier to fiddle without having to take my eyes off the road while driving. The iPod/MP3 connector is situated in the glove box – a good spot, since it hides the device from thieves.

The 2013 Volkswagen Jetta Hybrid shines here. Sporty feel, tight handling – but not go-cart tight – just stable and solid. The Jetta Hybrid wears a 1.4L, 4-cylinder, 170 hp turbo-charged gasoline engine mated with a 27-horsepower electric motor, which combined gets her going from 0 to 60 mph in 8.6 seconds. Not rocket ship fast, but zippy enough to easily merge into highway traffic at speed, and to punch it off the line to pass slowpokes.

The VW Jetta Hybrid costs about $8 grand more than the gas version Jetta, but it gets about 20 miles more out of each gallon of gas. Because of its higher price, the 2013 VW Jetta Hybrid will offer cost savings quicker to those who drive more than 10,000 miles per year.

An “E Mode” button puts the Volkswagen Jetta Hybrid in full electric power at up to 44 mph, but for a short time – just 1.2 miles. It’s perfect for navigating parking lots and residential streets, where drivers want to move slowly. The Jetta Hybrid also is equipped with stop/start technology, which automatically cuts off the engine while standing still at traffic lights, and then quickly restarts the moment a foot is taken off the brake. Low rolling-resistance tires gives the car about three percent increased fuel efficiency over ordinary all-season tires.

The 2013 VW Jetty Hybrid comes only in a 7-speed DSG (automatic) transmission; no manual transmission is offered.

I took the 2013 Volkswagen Jetta Hybrid on a two-hour, 70-mile mountain drive, and the car’s on-board computer calculated my travel at 39.9 mpg, with 490 miles left in my gas tank. Pretty impressive fuel economy when considering the drive through curvy and hilly terrain. Such gas mileage is normally reserved for flat highway driving, and even then, numbers like that would be impressive.

The 2013 VW Jetta has six airbags, including side-curtain airbags and seat-mounted airbags for both driver and front-seat passenger. There’s also the standard anti-lock brakes, and stability and traction control to help the car out of skidding and spinning situations.

Volkswagen gives decent standard equipment here: power doors and windows, an Am/FM sound system with CD player, Bluetooth, power heated front seats and side mirrors – included on every Volkswagen Jetta Hybrid. But a puny 5″ display screen is much smaller than standard units on other vehicles, and seems chinsy in an otherwise gorgeous and well-stocked interior. Also, the 2013 Jetta Hybrid doesn’t have voice command audio or navigation, even as an added option. 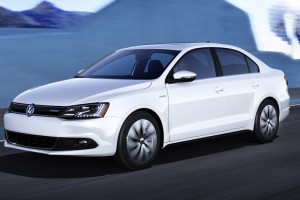 I'm a fan. I love the 2013 VW Jetta Hybrid ride quality, it's roominess and its good looks. Though the price difference between the gas version and the hybrid is substantial, those holding onto the car for years will save quite a bit at the fuel pump.

Stylish inside and out