The VW Golf appears to be in that special category known as “six degrees of separation.” No doubt you know someone who knows someone who has owned one at some time. It can carry a ton of groceries and a carload of kids, a mega haul from Costco or simply your painting canvases and supplies. Plus, it’s small enough to fit into a parking spot in NYC.

I drove the 2013 Volkswagen Golf TDI. Translation — Turbo Charged Direct Injection Diesel.Yes, I said diesel. This is the clean kind that has 90% fewer sooty emissions than former diesel engines (which did not get a good rap) and creates 20 percent fewer carbon emissions than a gasoline engine. Besides meeting the emission standards of every state, Golf TDI gets a highway fuel count of 42 mpg.

The fact that the Golf, a compact two or four door hatch-back, is Volkswagen’s best selling auto as well as the second–biggest selling vehicle in automotive history (behind the Toyota Corolla) is no surprise.

So, let me tell you a few reasons that I like diesel engines: #1 there is never a line at the diesel pumps and you get to pull up next to big trucks. #2 they feel smooth to drive — something about the continual torque curve which means more power sooner. #3 they can go forever on the highway … 42-mpg rocks!

The car I tested was the 2013 Volkswagen Golf TDI base model four door that can seat five. Base model means nothing fancy – it was a 6-speed manual with black pin striped cloth seats, black soft touch appointments on the inside, easily readable controls. Simplicity. And that’s just fine for this type-A kind of gal.

Due to engineering tricks like slimming down the A pillar (those supports on either side of the windshield), the 2013 Volkswagen Golf TDI is good on the visibility front. I would have liked a bigger rear view mirror, cushier seats and a more dynamic looking interior but ease is key to this car. That boils down to controls within easy reaching distance and signage big enough to see without reading glasses. The seats are easy to adjust- a manual lever on the front seats controls lumbar support, another manual lever controls height adjustment and a power lever controls reclining. The three-spoke steering wheel is thick—good for smaller hands—and can be adjusted for height and reach. The TDI steering wheel comes leather wrapped with controls on the wheel. (All the better to keep your eyes on the road.)

The 2013 Volkswagen Golf TDI has ample accessibility and cargo space. The 60/40 folding rear seat has a pass through handy for strollers or skis. With the rear seats in place there’s 15.2 cubic feet of cargo space — in plain terms, large enough for a mega warehouse store run; flipped forward it’s 46 cubic feet of space — roomy enough for a bike (sans front wheel.) To open the tailgate you simply flip open the VW logo and the tailgate lifts high so you won’t be knocking your head. I moved the seats easily with one arm (important if, like me, you’re carrying a multitude of other items). Also the standard luggage compartment cover is lightweight and a breeze to remove and put back in. There’s also full carpeting in the luggage area along with illumination.

The 2013 VW Golf comes equipped with six airbags (dual front, side and side curtain airbags). In addition to front safety belt pretensioners with load limiters, there are three-point safety belts in all five seating positions with emergency locking retractors. Electronic Stability Control (ESC), another standard safety feature,detects any loss of control and automatically brakes individual front or rear wheels and reduces engine power to help maintain control. The Golf also comes with Volkswagen’s Intelligent Crash Response System. In certain types of collisions, the fuel pump is shut off instantaneously, the doors are unlocked, and the hazard lights switched on.

I drove the 2013 Volkswagen Golf TDI on roads in Virginia that were meant for test driving a sports vehicle. I could actually push this four-door hatchback around the corners, stop quickly and experience that ready line of energy that the TDI can give the driver. On less than perfect roads (OK, I got lost a few times) the suspension remained pliable and smooth, the brakes solid.

2.0L GOLF TDI Clean Diesel WITH SUNROOF AND NAVIGATION Priced from $25,695 for the two-door and $26,395 for the four-door, this package features a sunroof with power tilt and slide and a radio navigation system.

2.0L TDI Clean Diesel WITH TECH PACKAGE Priced at $27,365 for the two-door and $28,065 for the four-door, this adds: Bi-Xenon headlamps with AFS; Dynaudio premium sound system; LED DRLs; and keyless access with push-button start. 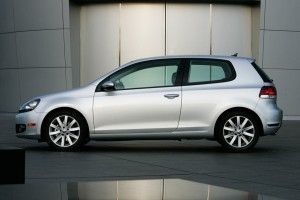 Yes, I see why the Golf is going into its sixth generation with over 27 million sold since its world launch in 1974. While the Golf competes with other hatches including Honda FIT, Hyundai Accent, Chevrolet Cruze and Toyota Prius, the Golf TDI stands in a class of its own with the diesel engine.

The starting price is $24,695 for the base model TDI four-door. That’s a good deal for a car this zippy and sporty

The interior. I wish they would pep it up with something hipper