Forget “Flower Power”, the 2013 Volkswagen Beetle strives to be more masculine and sporty, and loses its bud vase in the process.

Herbie the Love Bug made the Volkswagen Beetle famous, with its scrappy personality and can-do attitude. The new four-seater retains a lot of that youthful spirit but gains a robust engine to match its spunk.

To me, the 2013 VW Beetle is a breath of fresh air. As some cars get too serious, the Bug says, “Hey, wanna have fun?” I say “absolutely”. This new generation half-dome offers major headroom for even tall drivers and passengers. And because the windshield is pushed far forward, the sense of roominess in the cabin is magnificent – feeling far more spacious than the Beetle’s size would suggest looking at it from the outside.

The first thing I notice is the painted dashboard. It’s glossy and matches the car’s exterior paint color. I notice it immediately because when I was very young, my mom drove a putty-colored Bug. Inside, the dashboard was painted metal, to match the car’s exterior. I remember thinking it was cool that the car looked the same inside and out.

VW has brought back that look, which stands in contrast to contemporary styling and favor in other cars of glossy woods and cool, brushed aluminums. Here, the paint treatment is where it was when I was a kid: on the doors, glove box and dashboard. It’s even on the steering wheel, which is new. Fun!

The 2013 VW Beetle has a start button, so the key fob can stay in your purse. Great, as long as you’re not handing over your car to a valet (which, here in Los Angeles, happens a lot) and might forget to give him the key. This is my gripe about keyless cars. But push-button start is on most cars today, not just VWs, and that rant is for another day.

There’s a useful storage tray, lined with grippy rubber, which sits atop the dash. It’s large enough to hold a smart phone, change, parking tickets, or a pad and paper.

Climate controls are super simple, so there’s no need to take your eyes off the road to change the temperature. Love that. And a five-inch touch screen for the audio system and (optional) navigation is animated and attractive.

The VW Beetle trunk is enormous. Certainly spacious enough for a run to Costco, or to accommodate enough bags for a week’s getaway. The backseats split 50/50, allowing you to haul long things, and still have a passenger in the rear.

The (optional) panoramic moonroof is, as its descriptive suggests, huge, and opens up the cockpit to vast sky above. Absolutely delightful.

The 2013 Volkswagen Beetle isn’t the tech-iest vehicle on the market. But honestly, how much tech do you need while driving? Truth be told, the Germans – they who drive on the Autobahn – think we’re nuts for all the technology we demand in today’s cars. Still, the Bug has all the necessary perks.

A three-color ambient lighting package comes standard on all models. Think of it as the automotive equivalent of a mood ring, putting the Bug’s cabin in a groovy state of mind. Options include Bluetooth, a stopwatch and oil temperature gauge. Not sure why you’d need a stopwatch, but if you do, you can pay extra for it. And for the first time, the Beetle has (optional) Bi-xenon headlights and LED daytime running lights.

The 400-watt Fender Premium Audio system, with sub-woofer, is good but not amazing for the money. I would skip it and keep the standard sound system.

Front airbags are standard, as side curtain airbags both upfront and in the rear. An Intelligent Crash Response System reacts to certain types of accidents by shutting off the fuel pump, unlocking the doors and turning on the hazard lights. Electronic Stability Control is also included, which keeps the car on track, should you loose traction and start to skid.

It’s a blast. It’s quick off the line, so you can merge into traffic no problem. The brakes are fast to respond, and the steering is exact, with good road feel.

I took my 2013 Volkswagen Beetle test car on twisty Mulholland Drive and found the car hugged corners as well as its drivers once hugged trees. The Bug felt stable and I felt safe. 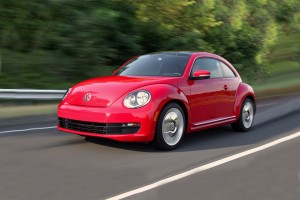 This upgrade in style and substance gives the Beetle more dash with the flash. For a fun ride it's got just the right amount of muscle.

Fun to drive and zippy

The Fender audio system is lackluster