Cute, fun, and versatile, the 2013 Toyota Yaris is a best bet for your first car or for those looking to downsize

You’re fresh out of college, you’re changing jobs, you’re an empty nester, you’re done with trying to park that hulking SUV, or you just don’t want to buy another used car. The Toyota Yaris is one of our favorite cute cars for women, and it’s the ride for you.

Whether you choose a five-door (four doors plus hatchback) or a three door, the Toyota Yaris is seriously practical and able, while still offering up style.

Toyota completely redesigned the Yaris last year, introducing soft-touch rubbers on the interior where there once was hard plastic on the LE and SE models. Excellent upgrade. And there are sportier gauges, which are colorfully backlit. The Toyota Yaris looks prettier than the previous generation.

I love it. There’s super-quick acceleration on take-off, meaning I can punch it to get ahead of that 18-wheeler, or merge with ease onto the highway. It’s a fun, spirited ride with a sprightly personality that drivers of any age will appreciate.

My only gripe was when I hit the gas on the highway on-ramp. Engine noise was robust and a disappointment, in spite of Toyota’s assertion that it had redesigned its windshield to have more sound insulation. Not so much.

Steering is exact and confidence-inducing, more sporty than luxury – in a good way. There’s not a lot of give in the wheel, which makes me connect better with the road.

Don’t let anyone convince you small cars aren’t safe. It’s just not true. There are nine standard airbags in this little runabout, including two seat-cushion airbags that wedge you into tight in your seat in the event of a collision. And there is a knee cushion bag for the driver, a feature normally found on pricier vehicles, which helps prevent leg injuries.

Whiplash-absorbing seats reduce the possibility that you’ll have whiplash-related problems. And the unique Head Impact Protection feature helps reduce the impact should you or your passengers hit their heads against the roof rail or side pillar. All these features work well together: The Yaris has a four-out-of-five star crash test rating from the Government, and a Top Safety Pick award from the Insurance Institute of Highway Safety.

Best yet, the Yaris doesn’t just help you survive crashes; it also helps you avoid them. Should you find yourself in a skid or having trouble gaining traction on wet or icy pavement, the Vehicle Stability Control takes over by cutting power to the engine and applying brakes appropriately. The Traction control also helps maximize traction by applying brake force to the specific wheel that needs assistance.

We all want to save money at the pump but also do our part in conserving fuel. The 2013 Toyota Yaris has an Eco light that tells you when you’re driving at your best. For example, it’ll pop on to say, “Good Job” when you are accelerating evenly and saving fuel.

I love the interior. Inexpensive doesn’t mean cheap here. An artistic mix of striated and pebble design plastics, as well as chrome-ringed gauges and climate controls, are attractive. And speaking of the climate controls, they’re large and intuitive – no need to take your eyes off the road to set the temperature.

A D-shaped steering wheel is sporty and feels good in the hands. It also gives more knee and legroom, since the flat part of the D is on the bottom of the wheel. And the wheel sits a bit lower than the previous-generation Yaris, for a more sport-inspired driving position. There’s loads of storage space on the upper and lower dashboard, as well as the center console. And the cup holder expands to fit any size vessel.

The basic audio system does the job just fine. It has four speakers and an AM/FM/DC unit. Nothing fancy. You might want to opt for the snazzier model, which has six speakers and Bluetooth. Both systems are simple to use and need no owners manual to operate it. Yay.

Seats in the 2013 Toyota Yaris are wide and mildly bolstered along the torso, so when you corner, you don’t go flying around. Overall, a nice place to spend your commute.

The Yaris L 3dr, 5 speed manual delivers 106HP 29/36 mpg and starts at $15,130. The 4 speed automatic model features the same engine and starts at $15,855. For a small car it's big on safety with standard stability and traction control, six airbags and brake assist. The Euro-styled hatchback comes in 3- and 5-door versions; air conditioning is standard, however features like power windows, audio system and cruise control are offered in option packages. The Sport Package includes a color-keyed body kit, sport front seats and fog lights. 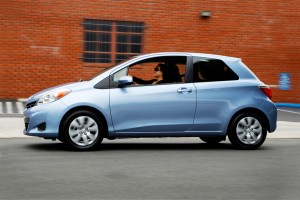 With updated clever styling, a lively personality and compact size, the Yaris is a fine choice for city wheels.

It's zippy and feels sporty.

Despite efforts at noise reduction, still noisy under hard acceleration.