The 2013 Toyota Venza is a big crossover utility vehicle with handsome styling and grown-up appeal.

I have good reason to believe that my boss, Tara, is a sadist. Tara insists that I write reviews that are funny and entertaining, and then assigns me the un-funniest vehicles on the face of the planet. I am sure that if we worked for a news publication, she would assign me all the missing children stories with her usual admonishment to “joke it up a bit, sweetie.”

Case in point: The Toyota Venza. There is absolutely nothing funny or entertaining about it. Sure, the design is unusual, blending elements of an SUV and a wagon, but handsome as it is, I can hardly poke fun at it. Stem to stern, the Toyota Venza is an exceptionally well-designed vehicle, if a bit pricey, and in any other circumstances I would write a straight-up review extolling its virtues and encouraging you to put it on your short list. Except I can’t, because Tara will fire me, and I have a family to feed. So let’s dive in and try to find the humor in this seriously excellent vehicle.

I’m sure that when Toyota’s executives first saw the Toyota Venza’s interior, they might have thought it was the Venza’s designers who were joking. The Venza was one of the first vehicles to break out of Toyota’s conservative mold, and details like the elephant-skin texture on the dash and carbon-fiber-like trim have since spread to other Toyotas. I happen to like the look, since Toyota’s traditional values are intact: Most of the controls are simple and straightforward (although the new touch-screen display stereo has a bit of a learning curve) and the whole thing feels as solidly constructed as a bomb shelter.
The front seats are comfortable and the sightlines are excellent. And if you want storage space, the Venza is your car: It’s got a closet-sized center console storage bin that will swallow bulky purses and, if you’re not careful, small children.

The Toyota Venza is one of the few utility vehicles not designed for families — it’s intended for empty-nesters, which is why you’ll find middle-age-friendly features like low door sills that make it easy to get in and out. That said, my kids liked the roomy back seat with its reclining backrest, the plethora of storage cubbies, and the optional dual-pane sunroof, which makes for great sightseeing.

Cargo capacity is 34.4 cubic feet, slightly less than Toyota’s family-targeted Highlander. Need more? Give a light tug on a small car-door-like handle near the Venza’s tailgate, and the seatbacks drop down all by themselves. Nice!

The 2013 Toyota Venza comes with the requisite six airbags plus a seventh one for the driver’s knee, an important feature that can prevent some rather nasty leg injuries in a crash. The 2013 Toyota Venza aced the Insurance Institute for Highway Safety’s front, side, rear and roof-crush tests, earning it a Best Safety Pick award. But if you’re looking for high-tech safety features like blind spot or lane-departure warning, you’re out of luck — the Venza doesn’t offer them.

For 2013, the Venza canbe had with Toyota’s EnTune multimedia stereo system, which allows you to plug in your smart phone and open up a world of Internet apps. You can plan an entire evening right from the Venza’s front seats: Search for a restaurant with Bing, make reservations with OpenTable, buy flix tix with MovieTickets.com, and use navigation system’s real-time traffic and weather services to find the best route. You can even play some romantic music for the ride home using Pandora or iHeartRadio. (Once you make it home and upstairs, though, you’re on your own.)

Opening the hood of my test Venza revealed a 4-cylinder engine. Talk about a sense of humor! Four cylinders to haul around nearly two tons of Venza? Now that’s funny. But Toyota gets the last laugh: The engine is a stout 2.7 liters and puts out 182 horsepower and, as it turns out, has more than enough power to hustle a fully-loaded Venza up steep hills at high speeds. There is a V6 available — 3.5 liters and 268 horsepower — but the Venza really doesn’t need it.

With that in mind, though, EPA fuel economy figures are pretty close for both engines. Front-wheel-drive 2013 Toyota Venzas are rated at 21 MPG city/27 highway with the 4-cylinder engine and 19/26 with the V6; with all-wheel-drive it’s 20/25 for the 4-cylinder and 18/25 for the V6. I drove a front-wheel-drive 4-cylinder Venza and averaged an impressive 26 MPG, and the big 17.7 gallon fuel tank allowed us to make the six- hour drive from our home in Los Angeles to my parents’ place in Phoenix without stopping for gas. (If only Toyota offered an optional toilet, we wouldn’t have had to stop at all.) 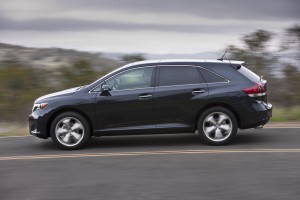 The Toyota Venza may not give us a lot to laugh about, but it does provide a lot to like: It's handsome, roomy, nicely appointed, and reasonably fuel-efficient. In fact, the only thing that really gave me a chuckle was the price — though Toyota's blue-chip resale values and epic build quality definitely add value, the Venza is still an expensive ride. If you can swing the payments, though, I'd definitely recommend it, and that — with all apologies to my boss — is no joke.