The 2013 Toyota Sienna minivan is big on space, big on features, and offers a big choice of models for all budgets.

In all my years of reviewing cars, I’ve found that while many women cringe at the idea of buying a minivan, men seem to love them. As with most things I know little about, I have a theory about this. Women — some of them, anyway — feel that a minivan tells the world, “I have given up my youth and my freedom for the time-worn shackles of motherhood.” But for men, the minivan is a sign of virility. It says to the world, “Look, everybody — my manly bits work so well, I had to buy a van!”

Well, guys, I can think of few better ways to show off the power of your loins than a Toyota Sienna — and ladies, even those who are minivan-averse, will probably like the Sienna as well. Though the Sienna does little to escape its mommy-mobile image, it does offer acres of interior space and lots of family-friendly comfort and convenience features. If you are going to buy a minivan, you may as well do it right — and they do not get much more right than the Toyota Sienna.

The Toyota Sienna’s dashboard is the automotive equivalent of granite countertops and stainless-steel appliances. It’s beautifully designed and so solidly built that it feels as if it was hewn by forces of the Earth rather than bolted together by mere humans. Button-happy dashboards are a pet peeve of mine, but the Toyota Sienna shows how it can be done properly: Toyota has taken full advantage of the Sienna’s wide dash by spreading everything out and using big, clearly-labeled buttons. Front seats are as comfortable as can be, although the short windshield doesn’t quite provide the panoramic view I’m used to in a minivan.

With seating for up to eight people, the 2013 Toyota Sienna has true Brady Bunch capacity (provided Alice stays home or Greg is on a date). I had my doubts about the eighth seat, a small removable perch that snaps in between the second-row captain’s chairs, but a quick test-sit revealed that it has enough room even for my hamburger-augmented caboose. The Toyota Sienna also offers reclining second-row seats with pop-up footrests, perfect if you and your Sienna will be moonlighting as a limousine service.

The third row is roomy enough for adults and even has an adjustable backrest. And getting back there is easy thanks to big, wide-opening doors and second-row seats that slide forward. Both rows have plenty of cubbies, cup holders, and A/C vents, and all but the base-model Toyota Sienna are upholstered in either stain-resistant cloth or easy-to-clean leather. One caveat: The steep angle of the seat cushions makes it difficult to install a rear-facing child seat at a proper angle.

As with most minivans, the Sienna’s third-row seats fold down into a storage well in the cargo bay. The seats fold by pulling on a single handle, with idiot-proof instructions printed right on the seat back. Excellent! Removing the second-row seats opens up a moving-van-like 150 cubic feet of space; unfortunately, the resulting cargo floor is pockmarked with attachment points.

The Toyota Sienna comes with electronic stability control and the usual six airbags (front and side airbags for the front seats and curtain airbags covering all side windows), plus a seventh for the driver’s knees. No surprise, then, that the Sienna rocked the Insurance Institute for Highway Safety’s front, side, rear, and roof-crush tests and earned their Best Safety Pick award.

Top-level Siennas offer a pre-collision system that tightens the seatbelts and primes the brakes if a crash is imminent, and most Siennas can be ordered with a blind-spot monitoring system (which warns you of cars in the blind spot with a little yellow light in the side-view mirrors) and a backup camera. The screen is tiny on models without the optional navigation system, but it will at least let you see if you’re about to back up over your kid’s bicycle.

You want gizmos? The Toyota Sienna has ’em; everything from a touch-screen navigation system to a wide-screen entertainment system that can display two inputs simultaneously. For example, a DVD on one half of the screen and a video game console (which can be plugged into the input ports and powered by the included 120 volt outlets) on the other half. For the driver, the Toyota Sienna offers wipers that turn on automatically when it starts to rain and active cruise control, which uses radar to detect cars in front of you and slows down to match their speed.

Though the Toyota Sienna isn’t the widest minivan you can buy, it feels huge when you’re trying to park it, and it really has to suck in its gut to fit into narrow parking stalls. That said the Sienna’s ride is firmer and more car-like than most minivans. There’s even a sporty SE version that gets a racy body kit and a sport-tuned suspension. It’s no Mazda5, but it’s as close to sporty as an 8-seat minivan is going to get.

As of 2013, the Sienna comes exclusively with a 3.5 liter V6; in previoius years, a stout four-cylinder ws offered. No big loss — the V6 offers strong acceleration and respectable fuel economy figures of 19 MPG city and 26 MPG highway. (I averaged 22 MPG even.) The Sienna is one of very few minivans to be offered with optional all-wheel-drive, a smart choice if you live where it rains or snows a lot.

Base-model Siennas start at $27,245, and come with everything a growing family needs: Rear air conditioning, cruise control, remote locking, and a height-adjustable driver's seat. And like all Toyotas, the Sienna's price includes all scheduled maintenance for the first two years or 25,000 miles. Next up is the $30,795 LE model, which adds power sliding doors, a nicer stereo, and improved trim. Other choices include the sporty SE ($34,385) and luxury-themed XLE ($34,205) and all-wheel-drive Limited ($42,135) models.

The Sienna offers too many options to list; they include a dual-pane sunroof, power tailgate, navigation system, leather upholstery, automatic headlights and wipers, radar cruise control, and the aforementioned dual-view entertainment system. Opt for everything and you can spend well over $47,000 on your Sienna.. 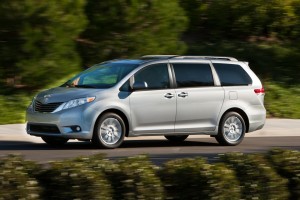 There are a lot of good minivans on the market, but the Toyota Sienna is my favorite. It offers tons of space, a well-thought-out and well-executed interior, and a wide selection of models. The options and prices make it easy to find the Sienna that's right for you and your budget. So, whether you're begrudgingly accepting parenthood or gleefully exercising your reproductive system, the Sienna is an excellent choice.