The first thing I notice while driving the 2013 Toyota RAV4 EV is that it’s whisper quiet. Not perfectly quiet, more like the whirring quiet of a MixMaster electric appliance. That alone is fun and different. But it’s what’s behind the quiet that is full of buzz.

It’s a big deal that Toyota, with Tesla’s formidable electric motor know-how, is able to make an all-electric SUV with an estimated 80-100 mile range. For most of us, that’s enough mileage to commute to and from work, haul the kids, run errands, and even take a short-haul weekend trip. Those who have shopped for electric vehicles but dismissed them for their small size or lack of utility, the 2013 Toyota RAV4 EV could be what you’ve waited for.

Just one caveat: initially, the 2013 Toyota RAV4 EV will be sold only in California, where the pleasant climate is conducive to optimum battery performance, and there is an extensive public charging network already in place. If sales soar in California, Toyota has plans to expand availability in Boston and New York, two cities that also have a growing public charging grid. Just 2,600 RAV4 EVs will be built between 2012 and 2014, so it’s clear Toyota is aiming for the affluent buyer and early adopter.

For all of its “everywoman” looks on the outside, the 2013 Toyota RAV4 EV goes luxe on the inside. It comes in just one flavor: loaded. There are no options. Included is a bright and colorful 8″ display screen for navigation, audio, info about mileage range and charging status, and Toyota’s proprietary telematics called entune. Entune allows access to internet-based goodies like OpenTable (to get instant restaurant reservations), MovieTickets, Bing, music from Pandora and iHeartRadio, and even information on where to find the closest electric charging stations.

This EV version keeps what’s great about the Toyota RAV4: roomy seating for five, ample cargo room (and even more space with the backseats folded down), and three 12V charging ports, including one in the cargo area, should you opt to plug in an audio system while tailgating, etc. Both front seat visors have extensions so that wherever the sun is, it’s not bothersome; and each visor has a lighted mirror. Backseat riders get spacious foot room, and seats that recline well enough for a satisfying sleep. There are even four cup holders back there. They really did think of everything. To expand the rear cargo room, the seats, which are split 60/40, lie nearly flat at the tug of a strap. They go back into place just as easily.

The heated front seats are wide and comfortable, with sports fabric in a mod design and leather trim. And the gauge cluster has contemporary styling with lots of pretty lights, animated displays and a clean look. An acoustic windshield reduces wind and road noise.

Since battery conservation is key – and because turning on energy abusers like the AC or heating systems will strain the battery and cause mileage range reduction – the 2013 Toyota RAV4 EV is equipped with a pre-heating and pre-cooling system. Just program the car to cool or heat itself a few minutes before driving off, while it’s still plugged into the wall, and the vehicle will be a climatic dream upon entry.

The 2013 Toyota RAV4 EV has eight airbags, Vehicle Stability Control and Traction Control to reduce the possibility of a spin or skid, and anti-lock brakes. Toyota’s new Safety Connect system is offered free for one year, and then on a paid subscription basis for $139.95/yr. This GPS/cellular-embedded technology automatically calls for help in the event of an accident. It also offers immediate push-of-the-button roadside assistance, remote door unlock and stolen vehicle location information.

It really is a fun ride! Sitting low to the ground – the Toyota RAV4 EV is a car-like crossover more than a high-riding SUV – the vehicle handles corners well, accelerates quickly, and stops on command. Everything you want in a safe family car. And the 2013 Toyota RAV4 EV gives the driver control over how much batter power to conserve or consume. Choose between normal, sport or eco modes. An Eco Coach tells (via the display screen) you how well you’re conserving energy and gives you advice on how to improve your battery conservation while you’re driving. When you do well, a little tree grows leaves. Do poorly and the tree looks bare!
sport, regular ev lo and high

Toyota has positioned the 2012 RAV4 EV at a highly educated, well-off pool of potential buyers. This is a tech-loving crowd, so Toyota made sure the car has the latest in electronic and internet-based wizardry. Entune, Toyota’s own telematics system, accesses the web through Bing. Get restaurant reservations instantly with OpenTable, buy theater tickets through MovieTickets.com, and check stocks, local weather, and traffic.

And the RAV4 EV is able to locate public charging stations, listing the closest ones and what they cost for a plug in. Choose the one you want and the navigation system will take you there. Simple. My only peeve is with the RAV4’s new audio system, which lacks buttons and dials on the unit, and is accessed only through the touch screen or steering wheel buttons. Should the passenger want to quickly change a station, or turn up or down the volume, he or she must page through the system and find a slider. Very annoying. Since when did two knobs – one for scanning, the other for volume – become an unwanted annoyance? I say, please bring back the audio buttons! Who’s with me on this?

The 2013 Toyota RAV4 EV comes in only one trim level: loaded. 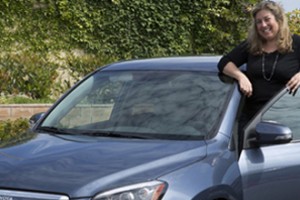 The 2012 Toyota Rav4 is the first all-electric vehicle to provide SUV-size cargo capacity with a 100-mile-or-so range. And though it's pricey, there are federal and California state tax incentives available to the first 2,000 buyers that can reduce the Rav4's price by about $10,000. Think of it as a do-gooder's dream vehicle.

Perfect blend of utility and eco-chic