If what you want from your ride is safety, durability and a really good time, check out the 2012 Toyota RAV4.

My best friend loves her Toyota RAV4 so much that when her lease was up, she bought it. This is worth noting because my best friend is finicky — the list of foods she won’t eat is longer than the list of food she will. She’s fidgety and has never met a chair she could sit still in. Go to the movies with her. I dare you. And she’s frugal (I’m being kind) — she refuses to pay more than $30 for a haircut!

So when I say she loves her RAV4, take my word for it. She never looked at her first husband the way she looks at this car.

Last week I spent some quality time in a 5-door, 4×2 Toyota RAV4 in the hope that I could see what all the fuss was about.

Simply put, it’s jeans versus sweatpants. Sweatpants are easy to put on and comfy to hang out in while jeans can hold your gut in or lift up your tush. You can dress them up or dress them down and you’ll hold onto them forever. The Toyota RAV4 has the potential to be your favorite pair of jeans.

The steering wheel tilts and telescopes, the driver’s seat is a fabric-trimmed and 6-way adjustable. Optitron instrumentation is standard with a really handsome amber-illuminated speedometer and tachometer, and the center console not only has two ILLUMINATED cup holders but a cell phone storage pocket to boot. What the dealer’s specs don’t tell you is that the Toyota RAV4 — and the one I drove is their most basic model — has what I can only call a Magic Glove Box.

This could count as a Gizmo but I chose to put it in the Luxury category. Here are the facts, you decide. There’s an upper and lower glove compartment, which is nice but not revolutionary. But the upper compartment glides open with a single touch — fantastic, right? — but if that weren’t enough, nothing slides out of it when it’s open. Then touch it again and it glides shut. OMG doesn’t begin to tell you how cool this simple addition is. I love my Prius but when I go searching for a flashlight in the upper compartment, everything spills out onto the floor.

Doesn’t being able to recline the rear seats and slide them back and forth count as a luxury? Because it does to me! And it seats five — the rear middle seat didn’t look comfy, but it is. Oh, and you can fit two kids comfortably in the easy-to-flip-up third row.

The RAV4’s tailgate door swings out rather than flips up, which means it can be tight if someone parallel parks too close. But the back cargo area is lower than most other SUVs, which means it’s way easier to load.

First off, you feel safe in a RAV4, probably because you are safe, but there’s something about driving it that made me feel secure. You’re not gliding on clouds but physically driving with a connected-to-the-road feel. There’s something refreshing about that.

Here’s another thing I really like: With the Toyota RAV4, safety isn’t optional — stability control, traction control, anti-lock braces, brake assist, Smart Stop technology as well as driver and passenger Active Headrests (to prevent whiplash) and driver and passenger advanced airbags, seat mounted side airbags and front and second row roll-sensing side curtain airbags are standard on all 2011 models.

Again, do not confuse the Toyota RAV4 with a high-end German car. The instrument panel is easy to reach and easy to use but it’s not going to dazzle you if you like your cars like you like your men: high tech and extremely complicated.

To me, the best RAV4 gizmo is the incredible storage space you get in this sort-of small SUV. The back seat folds down flat for 73 cubic feet of cargo space which roughly translates into everything your kid will want to take to college, or better yet, everything you buy at Costco including a generator, a palette of toilet paper and one of everything you sampled and felt guilty enough that you bought three of.

But here’s the greatest part: Under the cargo space is ANOTHER CARGO SPACE. Hidden … and huge! It’s like finding $10 in that hidden pocket of your raincoat!

If you want a navigation system you’ll have to get the higher priced Toyota RAV4 or an option package. But if you do, you’ll get the new Toyota Entune infotainment system with access to Bing, Pandora, real-time traffic and more. Oh, and the back up camera is in the rear view mirror which threw me at first but if I can get used to fat free frozen yogurt, I can get used to anything.

The Sport Package can run you up to $31,472 plus delivery processing and handling fees while the Limited edition tops out at $32,100 before the extras get tagged on. That’s lot for a handbag. A great deal for an SUV.

I’d suggest going for the 4WD if you drive in snow or on unpaved roads and with the optional tow package, the RAV4 V6 can pull as much as 3,500 pounds. By the way, I searched for “what weighs 3,500 pounds” and all I got were a bunch of ads for the Lap Band. That really hurt my feelings. 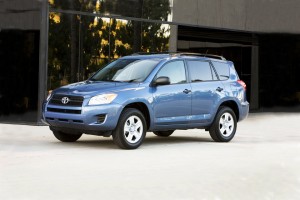 Once you’re behind the wheel, a little Toyota devil gets on your shoulder and whispers “drive this baby hard!” Sure, you’ve got to hold on tight and your butt may remember some of the bigger bumps along the way, but it’s like I was saying: sometimes you just want to relax in your sweats but every once in a while, it’s fun to strap on those jeans and go to town.

All that cargo space and an interior roomy enough for just about everyone, even if you have Marge Simpson hair.

Solid, practical and durable. Not words you’d use to describe a fashionista but good-looking enough for us mere mortals.

The AWD option: Unless you live with snow and unpaved roads, stick to the front wheel drive.