Young families, young singles and young-at-heart empty nesters have something in common…they all rave about the 2013 Toyota RAV4.

When Toyota launched the RAV4 in 1996, it was the first of its kind: a five-seat, moderately high-riding small SUV with a car-like ride. It blended what people liked most in an SUV (wide, easy loading cargo space, a commanding view of the road) with a car (easy to drive and park, comfortable ride quality) and created a new category: the crossover. Today, the market is crowded with 45 vehicles characterized as crossovers. But the Toyota RAV4 is still a top seller, with 1.5 million of them on the road today. That speaks volumes about how much car buyers like what Toyota’s doing.

With that in mind, Toyota engineers needed to push the RAV4 styling forward, as well as its performance and functionality, without alienating its enthusiasts. The result is a refined and contemporary design, better fuel economy, more cargo space, and luxurious interior appointments usually found on more expensive makes. But those refreshments come at the expense of a scrappier, more rugged look. Say hasta to the exterior-mounted spare tire, which now moves inside and underneath the rear cargo floor. I don’t think you’ll miss it.

Check out the Range Rover Evoque. One of this luxury brand’s nicest features is its two-tone seating design. I know, this is a Toyota RAV4 review. But one glance at the RAV4’s new interior and it “evokes” (ha ha) visions of the posh Range Rover. That’s a good thing. It’s gorgeous and rich looking.

The 2013 Toyota RAV4 has three trim levels: LE, XLE AND Limited. The LE and XLE have power six-way adjustable front seats, and the Limited version adds heated eight-way power driver’s seat with memory, along with a heated six-way front passenger seat. All trim levels except LE have beautiful contrast stitching on seats, which also is evocative of the Evoke’s (sorry, could help it) interior trim.

The new RAV4 cargo space is now two-feet bigger than before, and is enhanced further by folding down the second row of seats, which is simply done by one touch of a lever. Those seats are split in a 60% / 40% configuration, so that only part of the backseat needs to fold down, should you have a backseat rider there. Also, the backseats recline, for comfy naps on long road trips. On the Limited version, the power liftgate can be programmed to stop at a certain height, so that short drivers can easily reach the liftgate to close it. It’s all very civilized and easy.

Like the RAV4’s pretty seating, its dashboard display is equally pleasing and intuitively laid out. There are easy soft-touch rubberized dials and separate buttons for audio and climate systems, as well as a rubberized tray for small items like cell phones or loose change for tolls. It’s plain to see why the Toyota RAV4 has been a best seller, it moves people and gear in a compact package while still giving easy-to-use creature comforts we all expect.

The 2013 Toyota RAV4 now comes with eight standard airbags, including a driver’s side knee airbag. The Whiplash-Lessening seat actually helps to reduce the possibility of whiplash in the event of a rear-end collision. It also is thinner than the previous seat, giving more knee room to backseat passengers. There is an optional Blind Spot Monitor, which flashes when a car or other object is in the driver’s blind spot. This technology includes a Rear Cross-Traffic Alert system, which beeps when people, cars, or objects are in the path while the vehicle is backing up.

There’s also Vehicle Stability Control (on all trim levels) and a new Dynamic Torque Control on all-wheel drive models, which together use sensors to determine where wheels aren’t gripping and then apply appropriate power to the wheels that need it. The 2013 Toyota RAV4 comes with Toyota Care complementary maintenance for 36 months or 36,000 miles (whichever comes first), and includes 24-hour roadside assistance.

On a twisty highway, we took the RAV4 for a spin. Like expected, it doesn’t ride like a sports car; but it does ride like a car, rather than a truck. It can’t haul tushy around corners but it does give a relatively flat, stable ride on very tight turns, allowing passengers to not develop car sickness or feel tossed about. The 2013 Toyota RAV4 comes in both front-wheel drive (EPA: 24 mpg city / 31 hwy) and all-wheel drive configurations, which is great for those living in severe weather conditions. The AWD version, because it offers power to all four wheels instead of just the front two, gets reduced fuel economy – 22 city / 29 hwy.

There is a new six-speed automatic transmission for improved fuel economy over the previous generation, which had just four gears. Push the ECO mode button to get optimum fuel efficiency. It reduces the A/C output and diminishes the possibility of the driver being a lead foot, as it curtails the ability to floor it. A sport button does the opposite, allowing the driver more power when needed, like merging onto highways or passing slow vehicles. The vehicles is rated to tow 1,500 pounds, and there are roof rails that can accommodate a gear pod, for even more cargo storage.

The 2013 Toyota RAV4 gets the latest Toyota connectivity. Bluetooth is standard on all three trim levels, as is a back-up camera, and a 6.1″ display screen. Each trim level also receives an AM/FM/CD system with USB and AUX jacks, with six speakers. A premium JBL sound system with eleven speakers is optional on the Limited edition only.

The XLE and Limited versions can opt for Entune, Toyota’s web-based system that pairs to your smart phone to access things like I Heart Radio (HD internet-based radio), Open Table (for making restaurant reservations), Pandora, and MovieTickets.com (where you can buy movie tickets before reaching the theater.)

The 2013 Toyota RAV4 on-board technology is a huge leap forward from its previous generation, and will appeal to a new generation of younger internet-addicted buyers. 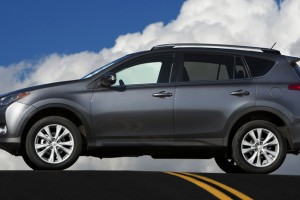 It's hard to fault the 2013 Toyota RAV4, since nearly everything has been carefully considered. It's got what many drivers desire: comfort, tech wizardry, cargo capacity and a small footprint for easy city parking.

One Response to “Toyota RAV4”