The Toyota Prius is probably the best-known hybrid on the market — a car surrounded by a lot of hype, which, as it turns out, is mostly true.

My first draft of this review of the Toyota Prius was two sentences long: “Works as advertised. You should buy it.” Tara, my boss, sent it back with a reminder that VroomGirls articles have a 600-word minimum. So I re-submitted it, same two sentences, plus the first 593 words of the Wikipedia article on King Carl XVI Gustav of Sweden. Tara sent that one back with a note that perhaps I might be happier pursuing a career in the janitorial sciences.

So in the interest of continued employment, I will endeavor to write a full-length review of the Toyota Prius, but here’s all you really need to know: It’s roomy, it’s reliable, and it really does get incredible gas mileage. Everyone I know who has a Toyota Prius gets at least 47 MPG — and every one of them really loves their car. Read the rest of this review if you want, but you’ll be wasting time that could be spent doing something more worthwhile, like studying up on Swedish royalty.

I love the 2014 Toyota Prius’ space-age interior, with its digital instrument cluster at the center of the dash that leaves the space ahead of the driver completely unobstructed. A futuristic floating center console carries the optional navigation system and funky joystick-like shift lever. But I’m not crazy about what I call the “Geekometer,” the big LED gauge that shows you what the hybrid system is doing. Not that I object to the geek part: the geekier the better, as far as I’m concerned. No, the problem is that the Geekometer is rendered in dim red and blue LEDs that look cheap and cheesy. The Geekometer deserves a proper LCD screen.

What I really like about the 2014 Toyota Prius is how roomy it is. The front seat is spacious and all-around visibility is superb. Aerodynamics dictated the Prius’ shape, but Toyota was careful to lift the roof high enough to provide easy access to the big back seat. The cargo bay holds a massive 21.6 cubic feet of stuff, more than some station wagons.

Aside from the cool-green image you’ll project when you drop your kids off at school, the Toyota Prius really does work exceptionally well as a family car. Besides a back seat big enough to accommodate kids from crib through college, there’s that huge trunk with its big hatchback opening. If your kid takes piano lessons, you can practically bring your own piano. And the Prius’ superior fuel economy provides a useful watershed for your family’s budget: If gas prices suddenly skyrocket, your kids won’t necessarily have to go without braces.

You would expect Toyota’s best-known hybrid to be brimming with technology, and you’d be right. Options range from the functional (navigation with real-time traffic) to the useful (dynamic cruise control, which matches the speed of the car in front, and a lane-departure warning system) to the downright whimsical (a solar-powered ventilation system that keeps the interior cool when the car is off). And there’s a 6.1-inch multi-information screen with USB for your iPod and Bluetooth for your phone.

There are several different types of gas-electric hybrid drive systems out there, but in my experience none is as effective as Toyota’s, especially at lower speeds and in stop-and-go traffic. The Prius’ power train is based around a 98 horsepower 1.8-liter gasoline engine and an 80 hp electric motor. The motor runs off a large battery, which is charged when the car slows down. EPA fuel economy estimates are 51 MPG city and 48 MPG highway; drive the Toyota Prius as you would an ordinary car, maintaining a reasonable respect for the posted speed limits, and you should have no problem averaging 47 MPG or better*.

* Insert legalese to the effect of “Don’t sue us if you buy a Toyota Prius and only get 46 MPG.”

Of course, there are people who adjust their driving to get the best possible fuel economy, an activity known as “hypermiling”. Don’t know how to hypermile? No problem: Press the “ECO MODE” button and the Prius will do it for you, altering the way it responds to the accelerator pedal in order to boost your fuel economy. On the other end of the scale, the “PWR MODE” button draws maximum power from both the gasoline engine and the electric motor, so you and your 2014 Toyota Prius can leap ahead and grab that open lane on the freeway.

The 2014 Toyota Prius is available in four trim levels, called Prius Two, Prius Three, Prius Four and Prius Five. (There is a Prius One, but it's only available to fleet customers.) The Two, priced at $24,740, includes cloth seats, automatic climate control, and keyless entry and ignition. Stepping up through the trim levels adds features like audio display and Toyota's new Entune technology with Bluetooth and iPod connectivity, leather seats, auto-dimming mirrors, a JBL stereo, LED headlights, and alloy wheels, while the options list include the gizmos we talked about above. But watch those options — tack on all of them, and the Prius' price tag can leap to nearly $40,000. 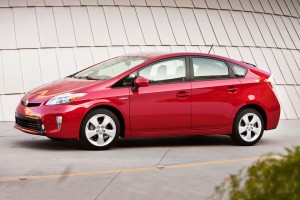 Lots of products make fantastic promises, but few deliver as well as the Prius. Toyota's hybrid provides all the room you and your family need and has no problem returning 45 to 50 MPG or better in everyday driving. It's everything a hybrid should be. What more do you need to know?

Drive it like you would any car and it gets great fuel economy.

Some of the LED gauges look a bit cheap.