The 2014 Toyota Prius V combines the cargo capacity of an SUV with the fuel economy of a hybrid car. What more is there to say?

I have come to loathe writing Prius reviews. Not because I dislike the Prius; actually, I think it’s a rather brilliant hybrid, and I’m glad that Toyota is expanding the lineup with new models like the 2014 Toyota Prius V. No, my problem with reviewing Prii is that it reduces my job to pointing out the obvious. Look at the picture and tell me what you see: A Prius with a station-wagon-butt grafted on. Anyone want to guess what the gist of this review is going to be? Yup, you guessed it: The Toyota Prius V is a Prius that hauls more stuff and only uses a tad more gasoline. There’s more to the story, but not a whole lot more. If you need the space of an SUV but long for something more fuel efficient and environmentally friendly, look no further: The Prius V is your car. Just be glad you don’t have to write about it.

The 2014 Toyota Prius V has a slightly different dash layout than the regular Prius, which surprised me, as they are so closely related under the skin. The instrument panel remains at the center of the dash, although the regular Prius’ cheesy-looking fuel economy display is gone (and good riddance). Unfortunately, the simple digital speedometer is surrounded by a myriad collection of lights and gauges that seem to have been borrowed from the starship Enterprise.

The 2014 Toyota Prius V lacks the Prius’ sweeping center console; I don’t miss it, but its absence makes the dash look a bit less futuristic and a bit more frumpy. The stereo and air conditioning controls are less intuitive than on most Toyotas, but there is no shortage of storage space, including two glove boxes (who owns that many gloves?) and a deep center console. The front seats are comfortable, the steering column is fully adjustable, and thanks to the higher roofline, over-the-shoulder visibility is even better than the regular Prius.

The Toyota Prius V doesn’t add any rear-seat legroom over the regular Prius. Actually, it takes a wee bit away, but not enough that you’ll notice. The higher roofline does add headroom, which my 6’2″ teenage son really appreciated. If your babies are still babies, you’ll like the fact that you won’t have to bend quite so far to get them into their car seats.

The 2014 Prius V is home to an SUV-like 34.3 cubic feet of cargo space, more than half again as much capacity as the regular Prius, with most of the growth being vertical. The regular Prius has a family-friendly trunk, but the Toyota Prius V’s extra vertical space really comes in handy for vacations and heavy-duty Costco runs, when we need to pack our cars to the rafters.

The 2014 Prius V, like the regular Prius, offers seven airbags: Two in front, a torso airbags in each front seat, a pair of side curtain airbags that cover the windows, and an airbag for the driver’s knees. Many cars now come with up to 10 airbags standard. At the time of writing, neither the Insurance Institute for Highway Safety nor the Fed had crash-tested the Toyota Prius V, but the ordinary Prius has excellent crash-test results and the V will most likely follow suit.

Toyota has a proprietary entertainment system called EnTune, standard in all but the base-model Toyota Prius V, which features Internet-enabled apps that use your smart phone for connectivity. The apps I found most handy were the real-time traffic, weather and fuel prices, along with Bing search, which allows you to search for local businesses and send their addresses directly to the navigation system. Need a florist, your nav will direct you there, and even tell you the price of roses. EnTune also includes Pandora internet radio, MovieTickets.com, and Open Table, an online restaurant-reservation system. You really can do dinner and a movie, with the help of your car.

Mechanically, the 2014 Toyota Prius V is pretty much identical to the regular 2014 Prius liftback, with the same 98 horsepower 1.8 liter gasoline engine and 80 hp electric motor working in concert to make it go. The V is about 230 lbs. heavier than the regular Prius, and the upright back end makes it a bit less aerodynamic. According to Toyota, the extra weight slows 0-60 acceleration by 0.6 seconds to 10.4, but in the real world, I didn’t notice much of a difference. The Pruis is no Porsche, but I had no problem merging onto the freeway or darting through city traffic.

But what about fuel economy? According to the EPA, the 2014 Toyota Prius V is significantly less fuel efficient: 44 MPG city, 40 MPG highway, and 42 MPG combined, compared to 51 city/48 highway/50 combined for the regular Prius. Now, 42 MPG for a vehicle with as much cargo space as an SUV is certainly nothing to scoff at. But in my real-world driving, I averaged 46.3 MPG, compared to 48.9 MPG in the regular Prius. Now that is impressive!

Toyota is offering the Pruis V in three trim levels, confusingly called Two, Three and Five. The Prius V Two is priced at $26,170, about $1,500 more than a regular Prius. It includes power everything, automatic air conditioning, a Bluetooth speakerphone, iPod-compatible stereo, and a backup camera. The $27,925Prius V Three adds navigation, satellite radio, and EnTune (see GIZMOS AND TECH, above. The top-of-the-line Prius V Five, priced at $30,750, adds heated seats, faux-leather upholstery, fancy-looking wheels and LED headlights. There are no factory options for the Two and Three models, but the Five is available with a $5,580 option package that includes a premium stereo, a moonroof, radar cruise control (which automatically slows to match the speed of the car ahead of you), and a self-parking system, bringing the all-in price up to a hefty $36,330. 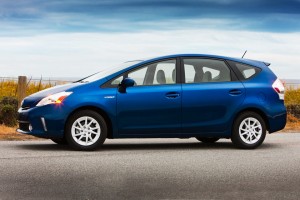 So here we are, one thousand words later, and what have we learned? Pretty much the same as what we knew at the outset: The Prius V is a fantastic idea, the first vehicle to combine the carrying capacity of an SUV with the fuel economy of a hybrid. Replace your SUV with one of these. You'll probably save a couple thousand dollars per year in fuel costs, all while doing your part to keep our air clean and reduce our reliance on oil. The Prius V may not be much fun to write about, but it's a fantastic car.

One Response to “Toyota Prius v”