The 2013 Toyota Prius PHV is but a baby step on the ladder from full gasoline to full electric vehicles. That is, if you can even find one to buy. Think of them as limited-edition high-heeled Toms shoes rather than Birkenstocks with vegan leather straps. The first is much harder to locate and carries a higher cool factor. The latter is widely available and dependable, just not as hip.

Toyota takes its best-selling, mpg-crushing Prius up a notch with the 2012 Toyota Prius PHV (that’s Plug-in Hybrid Vehicle). It is the same shape and size as the Prius we have come to know and love over the last decade, with the space-age cabin and the truncated trunk.
The major difference is under the little latch just in front of the driver’s door and the black sack of wires in the cargo space. The bag holds the charger, and beneath the latch lays the charging port. Plug one end of the cable into the car and one end into the outlet, and presto, you’re charging up your Prius. It’s that easy.

But full electric this car is not: plugging the Prius PHV in for three hours at a normal 110-volt household outlet gives you a full charge — which will take you about 15 miles. Toyota says that you could hop around town in 15-mile increments and never use gasoline, but that seems more like a challenge on “Top Gear” than a reality. The other difference lies is that Prius PHV does run on electricity all the way up to 60 mph, about 20 mph more than the regular Prius hybrid.

Think of the 2013 Toyota Prius PHV like eggs. Everybody used to buy any old eggs from the grocery store. Then we started buying cage-free organic eggs. Some of us now only buy eggs from family farms at the market on weekends. The very advanced among us actually raise urban chickens. The PHV is at the farmers’ market buying eggs, while full electrics like the Nissan Leaf are snatching warm eggs from their hen house each morning. It’s almost a full tree-hugging-hippy car, but not quite.

The interior of the 2013 Toyota Prius PHV is familiar, being identical to the current generation Prius hybrid. It has the same spacious feel and comfortable seats. The digital gauges for speed, fuel, and the rest are at the top of the dash in the center, almost like a heads-up display but a little to the right. A button on the steering wheel scrolls through nearly a half-dozen display styles, depending on how much you want to know about the electrical and gasoline usage at any given moment.

I have to admit to being charmed by the flying buttress of the center console, with the small parcel shelf and seat heating controls tucked underneath. It’s like driving a little space pod, especially when the gasoline engine is silent and I’m gliding along on electricity. Too bad that feeling only lasts for about 15 miles.

The Toyota Prius PHV is very family friendly, with plenty of space and four doors for ease of entry when it comes to new babies, elderly parents, and everyone in between. If the kids’ schedules are packed more tightly than the line for carob-chip pancakes at a Rainbow Gathering and you’re the chauffeur, you’ll be glad for full hybrid mode after those 15 all-electric miles have run out. Granted, most of the latest all-electric cars coming to market get nearly 100 miles per charge, but range anxiety harshes Mom’s mellow.

When the first Prius hybrids came out more than a decade ago, people were worried that the batteries would explode in a murderous, and very non-eco-friendly, blaze of chemicals. The long-term battery warranty and safety track record of the Prius seems to have allayed those fears, and the Prius PHV uses next-generation lithium-ion batteries for more power with less weight. Naturally, there is a plethora of airbags and safety programs exactly the same as the regular Prius.

The 2013 Toyota Prius PHV has your gizmos and tech, and it’s got ‘em right up front, where you can see them. All information is displayed digitally in the central readout on top of the dashboard. Clicking “Display” on the steering wheel brings up a floating dial, and clicking it a couple times scrolls through screen after screen of information.

The basic screen shows the battery’s charge and whether you are using electricity or gasoline to move on down the road. The next screen shows a graph of your past trips’ gas mileage, and the next has a bar graph with the percentages of EV and HV driving you’ve done. The final screen is the fanciest, with an outline of the Prius PHV in profile showing the battery, gasoline engine, and electric motor represented by icons. While you drive, the wheels turn, and the energy monitor shows you where the power is coming from.

To its credit and detriment, riding around in the 2013 Toyota Prius PHV is almost exactly like riding around in a Prius that doesn’t plug in. The credit is that the transition from electric-only mode to gasoline mode and back is seamless; I only noticed a little extra noise when the gasoline engine came on board. The detriment is that it is hard to justify that extra $10k when they seem like nearly the same car.
Another issue with the Prius PHV: you can’t have it. At least, not yet. The 2012 Prius PHV is only available in 14 states to start, mostly in the Northeast and on the West Coast, and only available in limited numbers. The rest of the country will have to wait until 2013 to see the car at neighborhood dealerships.

The 2013 Toyota Prius PHV starts at $32,000, without any state or federal credits that may materialize. The Prius PHV Advanced is $39,525, with a nav system and dynamic cruise control. But the third-generation Prius that’s on sale right now starts at $23,520 — nearly $10,000 less for the same fuel economy as the plug-in when it’s in hybrid mode. 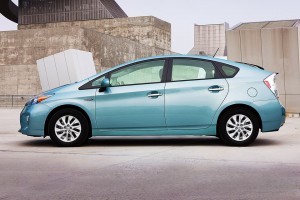 The plug-in hybrid system is a baby step, but every step counts in cleaner driving.

As comfortable and as easy to drive as any Prius ever.

The plug-in hybrid premium is hard to swallow.