Everyone knows the Mack Daddy of hybrids is Prius. Americans have bought 1.2 million of them, and one out of every two hybrid vehicles sold in the US is a Prius. So now comes the bite-sized version in this growing family of Prius, Priuii, Priusi – oh, whatever the plural of Prius is! In addition to the four-door hatchback version, there’s the new Toyota Prius V, which is a larger station wagon/crossover style vehicle, and a soon-to-be-released new Prius Plug-In, which can run entirely on power from the electric motor for up to 15 miles.

The Toyota Prius C is a delight. Cute and fun to drive, it feels surprisingly stable and planted in spite of its lightweight body. Plus, it has one of the cleanest-burning engines you can buy.

Toyota is marketing this sub-compact to younger buyers who may have been kept from the hybrid market because of price. The base-model Prius C sells for under $20,000, including destination and delivery charges. That’s $4,000 less than the least-expensive Prius liftback version. But we at VroomGirls wonder why only young people should have all the fun (and save money!) We think plenty of women of all ages will spark to its utility (the Prius C, like the liftback version, has four doors and a hatchback.) Empty Nesters, whose flock has flown, also should check out this easy-to-drive little runabout.

How do those Toyota engineers do it? So miniature on the outside yet so spacious on the inside. Like magic, the Toyota Prius C feels open and airy in both in the front and backseats. Sidelight windows (those little triangle panes of glass) bring sunshine inside.

Instruments on the dashboard are large and easy to use and read, so there’s no fumbling around to change the climate controls. The dashboard has plenty of storage space, with a cell phone tray set beside the charging port and the MP3/USB connections. Seating is comfortable, with two-tone fabric seats in three of the four trim levels, and a leather-look vinyl for the top-of-the-line trim version.

Just one demerit for the 2014 Prius C’s interior, an odd choice of embellishment on the front passenger side dashboard. There’s a strange scoring of the soft-touch plastic dash, making it look as if a child got a hold of a sharp object and drew random lines in the material. It would have been better left unembellished.

The hatchback cargo area is roomy enough to fit snow boards (with the backseat down), a week’s worth of groceries, even a bicycle (with the front wheel removed), and luggage for a road trip with you and your friends.

I was expecting a car this light to skitter over rough pavement and potholes. But what a delightful surprise to see this Toyota Prius C feels substantially heavier than it is. Toyota placed the car’s battery pack underneath the rear seats, making the Prius C’s center of gravity down low. You feel that planted effect driving even at highway speeds.

The 2014 Prius C has a fantastic turning radius, which is a real plus driving in tight city situations. And because the car can drive on electric power alone, the engineers implanted a low whirring noise – like a MixMaster blender – to alert nearby pedestrians who might not otherwise hear the car passing by.

Speaking of noise, the Prius C isn’t the quietest car under heavy acceleration – like when merging onto the highway. In spite of efforts to employ plenty of sound-insulating materials, it’s still quite loud in the cabin when you stomp on the gas. It didn’t bother me, since the sound abated as soon as I was at cruising speed and laid off my lead foot. If it’s the price one needs to pay for such stellar fuel efficiency, so be it. And despite all the effort and engine noise, this car won’t be the quickest pony out of the gate, making it to the 60 mph mark in 11.5 seconds. Most of us won’t care, however, as no one should consider this type of vehicle a sports car.

The 2014 Toyota Prius C comes standard with 15″ wheels outfitted with low rolling-resistance tires, and 16″ wheels on the top-of-the-line model. It also comes standard with a spare tire in the trunk, a perk that some automakers are now doing away with to cut costs and overall vehicle weight. But consumers lose when a car doesn’t have a spare on board. Cudos to Toyota for keeping this item as standard equipment!

As you might expect from a hybrid, there are many ways to drive – fuel efficiently or not. The 2014 Toyota Prius C comes with three modes of driving: EV, Eco and the default normal mode, which is a combination of the two. The EV Mode allows the car to drive up to 25 mph without the gasoline engine kicking on. Eco Mode controls how much throttle response gets to the engine, meaning if you stomp on the gas, it won’t really show much acceleration. It also cuts down on the power of the heating and cooling system. These two measures force the gasoline engine to function at its most efficient and save on fuel. Not using these modes will turn the Prius C into a normal car, meaning it won’t be nearly as gas sipping as it’s made to be.

Toyota scores big points with VroomGirls for placing nine airbags in the cabin, including a driver’s side knee airbag. Usually, cars in this price range don’t receive as many airbags, so Toyota’s commitment to safety is much appreciated. The Toyota Prius C also has as standard equipment Vehicle Stability Control and Traction Control (both of which help keep the car out of spins and skids), anti-lock brakes, Brake Assist (which detects panic braking and exercises the full force of the car’s brakes to avoid a collision), and Smart Stop Technology, which cuts down on the power in cases where both the brake and the accelerator are pressed simultaneously. For such a small and inexpensive car, the Toyota Prius C is loaded with top-of-the-line and state-of-the-art safety features.

And since the 2014 Toyota Prius C is a hybrid, the best new gadget is the car’s ability to encourage the driver to operate the car more fuel efficiently. An Eco Score looks at the last 100 trips to see how well the fuel tank is being managed. Are you a lead foot or a hyper miler? The on-board computer never lies! It will show how heavy your foot is on the gas pedal, how well you’re using the car’s regenerative brakes to recharge the batteries, even how much you’re paying per gallon of gasoline consumed, and the cost per mile. Another feature allows the Prius C owner to compare her driving to other cars, like a friendly competition. Say your friend gets 18 mpg in her SUV. You punch that number in and the Prius C will tell you how much money you’re saving over your friend’s fuel consumption. Mean, huh?!


There are four trim levels for the 2014 Toyota Prius C: 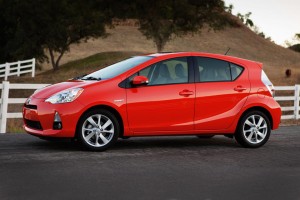 If you took off Toyota's badges, I'd have thought I was driving a European car. Steering is so direct with the new Prius C, handling on tight turns is so much fun, and connected, I would never have imagined this is a hybrid car from Japan. Other car makers in the compact segment should watch their trunks, the Prius C is a leader not just in fuel economy, but also in driving fun.

The way it drives - feels planted and safe even at freeway speed.

A spare tire is included in the Prius C. Fantastic, since a growing number of cars no longer come with spare tires as standard equipment.