It is arguably among the most reliable cars ever built, and more than 40 million have been sold worldwide! Now, this 11th generation Toyota Corolla gets a complete makeover, and we think you’re going to like it.

Ten Things to Know about the 2014 Toyota Corolla

3. Interior gets luxe details like piano black lacquer-look dash with sporty aluminum trim, soft-touch plastics, seating with lumbar and side bolster support, an added 5.1 inches of backseat legroom for your posse, power windows and mirrors, air conditioning and even CD player and Bluetooth connectivity for phone.

4. The 2014 Toyota Corolla has class-leading safety features with eight airbags standard, and a top 5-star crash rating from the Insurance Institute for Highways Safety (IIHS.)

5. Excellent handling for such a small, inexpensive car. Stiffer in the corners than previous models, with ride quality that glides over bumps.

6. The 2014 Toyota Corolla comes in four grades (L, S, LE, LE Eco) and two trim levels (plus or premium.) The base model – the Corolla L – has a thick urethane steering wheel, rather than leather wrapped found in the pricier models, but it’s fine, feels good. What’s not great in the base L model is the cheap-feeling polyester upholstery material on seats. If you can swing it, go for the S or LE, or LE Eco models

8. Seats are more comfy than before, with better side/torso bolstering and more cushion density front and back.

9. A back-up camera is standard on all Corolla trim levels except the L. As you back up, anything in the car’s rear view path will be displayed on the Toyota Corolla’s 6.1″ full-color screen.

10. Interior storage is improved in the 2014 Toyota Corolla. The trunk is large enough for several pieces of luggage, or to accommodate overspending at the warehouse store :)) The center console has a top tray so smaller items like cell phones don’t get lost in the larger compartment. There’s even an overhead spot now to store sunglasses. 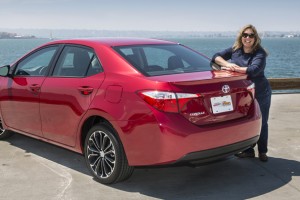 For more than half a century, Americans have embraced the Corolla. With the 2014 model, there's more to like: more comfortable, better fuel economy, improved handling and acceleration, better looking. Tried and true.