The full-size Avalon sedan may wear a Toyota label, but inside, it’s pure Lexus.

I am trying to find the scandal in the Avalon’s past. My theory is that the Toyota Avalon was originally designed for Lexus, Toyota’s luxury division, but then it committed some unforgivable crime. Perhaps it sold trade secrets to Mercedes, or maybe it had an affair with the CEO’s daughter. Whatever the Avalon did was so heinous that it was banished from the Lexus brand and demoted to the ranks of Toyota. Both Lexus and Toyota deny this vehemently, but I smell a cover-up.

Test drive the 2012 Toyota Avalon, and you’ll see that I’m on to something. Sure, the Brand builds nice cars, but the Toyota Avalon is a bit too nice — too comfortable, too roomy, and too luxurious to wear a Toyota badge. Granted, Toyota has largely neglected the Avalon for the last few years. Aside from some minor styling changes and equipment upgrades for the 2011 model year, the Avalon hasn’t changed much since 2005, which leads me to believe that it hasn’t behaved much better at Toyota than it did at Lexus. If you see a bunch of unwed pregnant Camrys running around, you’ll know who to blame.

The Toyota Avalon’s dashboard is a collection of this Japanese marque’s Greatest Hits. Conservatively styled with wood and brushed-metal trim, it has all the bits and pieces that made Toyota (and Lexus) such a big success in the 80s and 90s: Big buttons with easy-to-read lettering, razor-sharp gauges, exquisitely engineered storage bins that open softly and silently, and a directional signal ticker loud enough to wake the dead. I thought the décor was a bit old-fashioned, but the plastics, fabrics and carpets are as nice as those found in high-end luxury cars and the build quality is faultless. It’s as if the Avalon is not so much a car, but a retirement present for long-time Toyota loyalists.

The front seats are roomy and supportive, but the back seat has to be seen to be believed. It’s huge, with good thigh support, room to stretch your legs, and even reclining backrests, plus a flat floor for true three-across seating. It’s the perfect place for a romantic get-together with the CEO’s daughter. Or a Toyota Camry.

With its enormous back seat, the full-size Toyota Avalon will suit kids from cradle to college. It’s also great for adults — in fact, I recommend that Avalon owners only befriend other Avalon owners; otherwise every time you go out, your friends will insist on taking your car.

But the trunk is scandalously small — at 14.4 cubic feet, it offers less space than the mid-size Toyota Camry, and not much more than the compact Hyundai Elantra. This For comparison, the full-size competitor Ford Taurus has a 20.1 cubic foot trunk. The Toyota Avalon will accommodate a bulky stroller and baby gear, but a long family trip will require some creative packing.

The Toyota Avalon has the usual six airbags (two in the dash, two in the front seats, and two side curtain airbags that cover the side windows), plus a seventh “knee” airbag to protect the driver’s knees from the nasty sharp bits under the dashboard. The Avalon scored well in the Insurance Institute for Highway Safety’s front, side, rear and rollover tests — though, ironically, the crash test dummy did show an injury to the right knee. Regardless, the Toyota Avalon’s test scores were good enough to earn IIHS’ coveted Top Safety Pick Award.

The Avalon is engineered to be smooth, comfortable and quiet, and it does all of the above exceptionally well. But if you have a passion for driving, you’ll be disappointed, because the Avalon’s lifeless steering and indifferent handling are no fun on a curvy road. That said, if I was planning a cross-country trek, the Avalon would be on my short list: big, comfy, and unobtrusive as it is, it’s a great way to eat up those long highway miles.

The Toyota Avalon has power-a-plenty from its 268 horsepower 3.5 liter V6; in fact, I found it difficult to start from rest without jerking my passengers’ necks. Fuel economy is better than I expected from such a big car: 20 MPG city and 28 MPG highway, and unlike its premium-swilling Lexus brethren, the Avalon runs on cheap 87 octane gas.

All Avalons get Bluetooth phone connectivity, a nine-speaker stereo, and a backup camera as standard, while rain-sensing wipers and a touch-screen navigation system are optional. But it misses out on high-tech features such as active cruise control or a blind-spot warning system — probably an effort to prevent the Toyota Avalon from stealing sales from the Lexus division.

comes in two well-equipped trim levels. The base model (a term I use loosely) gets dual-zone climate control, leather-trimmed power seats, power glass moonroof, a nine-speaker stereo with iPod-compatible USB port and Bluetooth audio streaming, and a self-dimming rear view mirror. See, I told you it could pass for a Lexus. Except the price is pure Toyota: $33,955. That's way less than you'll pay for comparably-equipped large cars from luxury brands like Acura or Mercedes. The 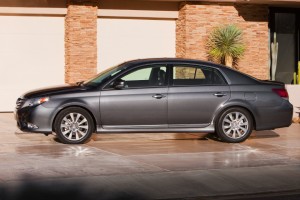 The Avalon may say Toyota on its rump, but it's trimmed out like a Lexus and it drives like a Lexus. Oh, sure, Toyota may have stripped it of some of the high-end, high-tech features you'll find in luxury-branded cars, but I'm not fooled. There's a scandal here, and I'm going to find it. Meanwhile, you might want to buy a Toyota Avalon now -- it's an exceptionally good deal for such a large, well-equipped car, and once I blow the lid off this thing, I can't guarantee that Toyota will keep the prices this low.

The Toyota Avalon has a huge back seat, luxury-car interior trim, and bomb-proof build quality.

Decent gas mileage for such a big car.

Wish I felt more connected to the car emotionally.

Value For The Money
Safety
Fun