Redone from the wheels up, the 2013 Toyota Avalon is no longer the brand’s wallflower. Pretty, smart and poised, she’s this year’s valedictorian!

I’m picturing one of those brainwashing machines, where the subject has a bowl over her head and wires attached. Stay with me here because this will make sense. Think of the Toyota Avalon. Now put the brainwashing gizmo on your head. Good, turn it on and forget everything you ever thought, felt, disliked about Toyota’s flagship Avalon. Though the 2013 Toyota Avalon shares its name with the previous generation sedan, it looks, acts and drives nothing like it. Gone is the insipid, overly-conservative styling, the milquetoast drive feel, the I-could-just-take-a-nap spirit. Now wake up, because in its place, the completely redone 2013 Toyota Avalon is chic and contemporary, but most of all, relevant. It is the new player in the mid-size category and it absolutely deserves to be called Toyota’s flagship. The 2013 Avalon was designed in and is built in America, and it comes in two iterations: a gas engine and a hybrid, which gets a remarkable-for-its-size 40 mpg.

Though many of us choose cars because of what they look like on the outside, we do spend nearly all of our time inside the vehicle. This is really what should matter. And the 2013 Avalon is seriously cherry. Luxe features abound in this five-seater: a chronograph-look to the gauge cluster, a nod to the precision of a Swiss watch; a cool climate control bar whose fan speed responds to the slide of your fingertip, heated and ventilated front seats, and a stitched leather-look dashboard, just like those found in pricier luxury brands.

The cabin has theater-style lighting, using LEDs to softly illuminate the cup holders, door latches and center console. The 8-way power front seats are ample, comfy and bolstered for good support on long drives. And there are useful elements, like a Smartphone bin with charger.

One of my pet peeves is the lack of attention some automakers give to backseat riders – like they are due second-class accoutrements just because they’re not up front. But not Toyota. The 2013 Toyota Avalon treats backseat passengers like, well, the lucky shotgunner. More legroom, separate rear climate controls and vents, and excellent headroom for even your tallest friends and family. Both front and back passengers have ample storage for bottles and nick-nacks.

The cabin’s trim is posh – the stitched leather-look dashboard, a stitched leather-trim steering wheel with functions for Bluetooth, audio and cruise control, a glossy wood-look trim, and adjustable lumbar support and seat extenders for the front, which aids in combating leg fatigue in the vertically blessed. All windows get one-touch up/down, and in the Touring and Limited editions, the rear view mirror has a digital compass and programmable buttons to open three garage doors.

How’s this for state-of-the-art safety? 10 airbags come standard. So many you’ll feel like a pinball if those things ever have to deploy – just kidding. Ten airbags are a lot, especially when you compare that to one of the Avalon’s mid-size competitors, the 2013 Ford Taurus, which wears just six. All those airbags create a safety cocoon in the event of a crash. And there are little things, too. Like an automatic high-beam system that cuts headlight brightness for on-coming cars and pedestrians in the vehicle’s line of sight.

On the Limited and Touring models, a Blind Spot Monitor has flashing lights to indicate a vehicle or object is in the car’s blind spot. And a radar sensor detects when people or objects are in the way of the car while it’s backing up. Also optional is the Dynamic Radar Cruise Control, which will apply the car’s brakes and accelerate on its own to keep up with traffic.

In keeping with Toyota’s push to appeal to a younger buyer, the 2013 Avalon gives a tighter, firmer ride than the outgoing model. Both the hybrid and gasoline versions can punch it well to accelerate onto highways, and handling feels direct, solid and above all, safe. The car rides on 17″ alloy wheel. Some models get steering wheel-mounted paddle shifters for a more boy-racer quality so the driver actively chooses the gears.

Buttons that control driving modes include Eco, EV and Sport. Choose Eco for best fuel economy. It cuts the accelerator response and reduces the effectiveness of the climate system. In other words, the car won’t cool as quickly, and the car will go a bit slower off the line. But hey, you’ll save on fuel! Go for the EV mode and the Toyota Avalon uses only the electric motor for about half a mile and only at speeds under 25 mph. It’s perfect for cruising parking lots and on neighborhood streets. The Sport mode gives quicker shifts and accelerates faster – but at a price, it gorges on fuel.

The 2013 Toyota Avalon Hybrid gets a fantastic 40 mpg combined city/hwy driving – stellar for a car this large and tricked out.

* All prices include $760 delivery and destination charge 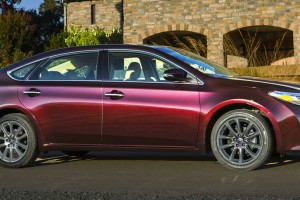 Roomy, swanky and with better fuel economy, the 2013 Toyota Avalon is entirely different from it's boring predecessor. We like where Toyota is going with its design and drive quality.

Can't think of a thing!

One Response to “Toyota Avalon”