The 2013 Toyota 4Runner is the perfect SUV if you have a jungle to conquer, but if your most severe drive is taking the kids to school in a rainstorm, it might be overkill.

Before you read this review, take a quick look around and make sure there are no Toyota 4Runner owners lurking about. Close the door and turn down the lights. If you have a “Do Not Disturb” sign, hang it on your door. A handwritten “Danger: Radioactive Waste” sign works just as well.

See, people who don’t own 4Runners, like you and me, aren’t encouraged to talk about the Toyota 4Runner. The 4Runner is an old-school “body-on-frame” SUV built for serious off-road use. Modern crossovers (a.k.a. CUVs), like Toyota’s own Highlander, offer more interior space, better gas mileage and more car-like handling, and that’s why they are more popular — but the Toyota 4Runner has a loyal following, so Toyota keeps it in production.

Truth is, Toyota has done an amazing job with the 2013 Toyota 4Runner. But unless you have need for its ultra-rugged construction, you’ll find it to be heavy, thirsty, and short on interior space. And if the 4Runner faithful knew I was telling you that… well, let’s just say they like to run people over first and ask questions later.

The 2013 Toyota 4Runner was designed to look rugged inside and out, hence the butch interior with big, chunky shapes done up in multi-colored plastics. But it’s still a Toyota, so the materials are top-notch, the switches are sensibly laid out and neatly labeled, and everything feels expensive and well-built. The windshield is a bit on the short side, but the 4Runner’s tall driving position makes the driver feel like Queen of All She Surveys, with big side-view mirrors to ensure she won’t miss any of her subjects should they creep into her blind spots.

Body-on-frame SUVs — which have a separate frame that holds all the mechanical bits, as opposed to using the body as the supporting framework — tend to have cramped back seats, but the Toyota 4Runner’s second-row seat was better than I expected. Legroom and headroom were good, although I found the seat short on thigh support (and at 5’6″, my thighs aren’t very long).

But the optional 3rd-row seat was even worse than I expected. It’s tiny, cramped, and so close to the back end that I shudder to think of what would happen to the occupants in a rear-end crash. Access to the seat is terrible, and deploying it is terribly difficult. With the seat in place, cargo capacity is reduced to just 9 cubic feet — enough for a few grocery bags, provided you take the groceries out and fold the bags up. With the third seat stowed away, cargo capacity grows to an enormous 46.3 cubic feet, enough for everything from giant jogging strollers to college steamer trunks.

Along with the usual front airbags and front-seat-mounted side airbags, the 4Runner has side curtain airbags that cover the side windows (including the third row if your 2013 Toyota 4Runner is so equipped) and knee airbags for the driver and front passenger. The 4Runner earned best-possible scores in the Insurance Institute for Highway Safety’s front, side and rear impact tests, but didn’t do as well in the roof crush test.

But what concerns me more is the 4Runner’s ability to avoid an accident. Granted, the 4Runner is better than any other body-on-frame SUV I’ve driven, but it is still heavier than a similarly-sized crossover, which means it can’t swerve or stop as quickly.

Given the 4Runner’s mission, it should be no surprised that most of the gizmos are geared towards off-road driving. 4-wheel-drive Toyota 4Runners have a Downhill Assist Control system; though designed for driving on loose terrain, it’s great if you have a steep, slippery driveway. The Toyota 4Runner also offers hardware borrowed from Toyota’s jungle-conquering Land Cruiser, including Crawl Control, which works the throttle and brakes to climb over significant obstacles (like, say, the island of Cuba), and stabilizer bars that automatically disconnect from the suspension for better up-and-down axle travel. These are terrifically useful features if you commute to an undeveloped part of Costa Rica, but for those of us who don’t drive on anything more severe than the occasional dirt road, they’re overkill.

All 2013 Toyota 4Runners get a big 4.0 liter 270 horsepower V6 engine and a 5-speed automatic transmission. The V6 offers power-a-plenty, but while seasoned Toyota 4Runner owners will probably be pleased with the EPA fuel economy estimates (17 MPG city/23 MPG highway with rear-wheel-drive, 17/22 with four-wheel-drive), those used to smaller SUVs or CUVs might be shocked at the 4Runner’s thirst.

Big body-on-frame SUVs tend to be ungainly, so I was pleasantly surprised at how well the Toyota 4Runner goes around corners. Many people worry about flipping their SUV over if they drive around a corner too quickly. The truth is that it’s very difficult, if not impossible, to flip an SUV simply by taking a turn too fast, and Toyota engineered the 4Runner to corner with minimal body lean in order to increase drivers’ confidence. There’s some slop in the steering and some bounce in the ride, all side effects of the 4Runner’s off-road-capable suspension and big soft tires, but not nearly as much as I expected; in fact, it’s one of the best body-on-frame SUVs I’ve ever driven.

The 4Runner is sold in SR5, Trail, and Limited models. SR5s come nicely equipped with prices starting at $32,185 for rear-wheel-drive and $34,060 for four-wheel-drive (4x4). I see little point in buying the rear-drive version; it has all the disadvantages of an off-road SUV with little actual off-road capability.

The $38,845 Trail model (4x4 only) is designed for serious off-roading, with all of the features we talked about in Gizmos and Tech, a locking rear differential (if you don't know what that is, you probably don't need one), and water-resistant seat fabric.

Topping the lineup is the 4Runner Limited, priced at $39,690 for rear-drive and $40,845 in 4x4 form, with leather seats, dual-zone climate control, and host of other luxury goodies. With all the options and a few dealer-installed accessories, the 4Runner can top $46,000. 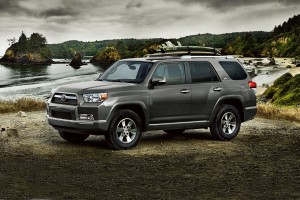 Though the 4Runner is exceptionally talented, if you don't have need for its extreme off-road capability, I'd suggest an all-wheel-drive crossover such as Toyota's Highlander. Crossovers generally have more interior space and, while not designed for serious off-roading, are great in snow and rain. If off-roading is part of your regular agenda, however, the 4Runner is very good, and it won't make you miserable in day-to-day driving. You might want to — Wait! Is that the sound of a 4Runner engine? Oh no, they found us! Run!

Good handling for an off-road SUV.