The 2013 Terrain is GMC’s vision of a 5-seat crossover for men — but it has a lot of family-friendly features that even the estrogen-bearing set can appreciate.

The 2013 GMC Terrain is supposed to be a manly 5-seat crossover utility vehicle, which I suppose is why our boss Tara sent me, the resident VroomDude, to review it. Problem is, while I am a man, I’m not particularly manly. I don’t lift weights, I don’t like guns, and I bawl like a baby every time I watch Sense and Sensibility, specifically when Emma Thompson gives her “What do you know of my heart?” speech. (I can usually hold it together until “Had I not been bound to silence, I could have produced proof enough of a broken heart, even for you.” Oh, Eleanor!)

So I don’t really appreciate the manly bits of the GMC Terrain — specifically the unusual styling, more specifically the big, boxy fenders. I think it looks a bit silly and cartoonish. But once I’m inside the Terrain — where I don’t have to look at it — I’m actually a really big fan.

The Terrain I drove for this review was the new-for-2013 top-of-the-line Denali model, a rolling ode to snazziness with heated leather seats, a sunroof, soft-touch dash with bright red stitching, and “smoked mahogany” wood trim. (I knew a guy in college who used to smoke mahogany.) The interior is fairly well finished, although our early-production cars had a couple of odd-fitting bits and bobs here and there.

But it’s not all bliss: I prefer light-colored interiors, but the finer examples of my gender apparently don’t, because the Denali’s cabin is only available in black. (Less-expensive trims can be had in an odd-looking grey-and-black combination.) And I don’t understand why, with such a big dashboard, the Terrain’s designers felt the need to cram all the air conditioning and stereo controls onto one tiny little panel. I dig the touch-screen stereo, though; it has bright, crisp graphics and is refreshingly easy to use.

This is where the GMC Terrain really pulls ahead in my book. Notice how far the front and back wheels are from each other — that gives the Terrain a lot of space for passengers, especially back seat passengers, be they growing kids or grown-up friends. Behind the rear seats you’ll find 31.1 cubic feet of cargo space, more than enough for baby gear, suitcases, or a trip to the wholesale warehouse to stock up for Armageddon.

For 2013, the GMC Terrain gets a handful of new safety options: A lane-departure warning system that beeps if you drift over the lines; a collision warning system that warns you to slam on the brakes (good for when your attention wavers); and a blind-spot warning system that lets you know you’re about to merge into another car, or if someone is driving down the aisle as you are backing out of a parking space.

What happens if you do manage to crash your Terrain? Well, that depends on who you ask. The Terrain has six airbags, the bare minimum these days, and in the government’s crash tests, it scored only four out of five stars. But the Insurance Institute for Highway Safety gave the Terrain top marks in its front, rear, side, and roof-impact tests, and awarded the GMC Terrain a Best Safety Pick award.

The 2013 GMC Terrain offers two engines; manly man that I am, I sampled the more powerful one, a 3.6 liter V6 that produces a healthy 301 horsepower. It also produces a lot of noise under hard acceleration, but it does fling the Terrain down highway onramps and around slow-moving trucks with great haste, and settles down to a dull roar when you are cruising. If you’re not a woman in a hurry, I’d suggest the 182 horsepower 2.4 liter 4-cylinder; its EPA fuel economy estimates (22 MPG city/32 MPG highway for the front-wheel-drive version, 20/29 with all-wheel-drive) are much better than the V6’s, which happen to be nothing to write home about — 17/24 with front-wheel-drive and 16/23 with all-wheel-drive, making it more thirsty than seven-seaters like the Infiniti JX35.

The GMC Terrain has a firm but comfortable ride, and it while it feels big and substantial, it’s fairly tidy when whipped around corners. Tidy, but not much fun — the steering doesn’t give much feedback and the chassis doesn’t exactly feel eager to attack your favorite curvy road. If you’re a point-a-to-point-b kind of gal, the Terrain’s demeanor might not trouble you, but if you love to drive, you probably won’t love the Terrain.

Along with all the high-tech safety gear mentioned above, the Terrain offers an excellent touch-screen stereo with satellite radio and Internet-enabled apps like Pandora and Stitcher radio. Plug in your iPod or MP3 player and it will even try to show you the proper album covers for your music (although it doesn’t always get it right — when I played a Stevie Wonder tune, it popped up a picture that looked an awful lot like David Lee Roth. That said, it’s not like Stevie would notice…). The optional navigation system is some kind of wonderful; it speaks clearly and shows directions on the big center screen as well as a little LCD screen on the dashboard. But the high-end Denali I drove was missing a few important items from its gizmo resume: No dual-zone climate control and no active cruise (which automatically matches the speed of the car in front). Many of the Terrain’s luxury-oriented competitors offer these features and more.

GMC had not announced pricing for the base-model 2013 Terrain at the time of writing; 2012 models start at $26,385 and we expect that the 2013 price will be a few hundred bucks higher. The 2013 Terrain Denali model I tested ranges from $35,350 for the four-cylinder front-wheel-drive version up to $38,600 for the V6 all-wheel-drive model I tested, and that's before you start adding options. That makes it less expensive than established luxury CUVs like the Lexus RX, but it's very close to Audi's impressive Q5. 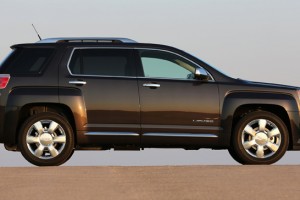 Overall, I was really impressed by the functionality of the 2013 GMC Terrain, but the driving dynamics left me a bit cold and my inner girly-man found the styling a real turn-off. The good news for you -- and the bad news for the Terrain -- is that there are a lot of excellent choices in this segment. The Chevrolet Equinox is mechanically similar to the Terrain and offers the same functionality with more androgynous styling. The Volvo XC60 is fantastic to drive, but has a significantly smaller back seat. And the Acura RDX offers a nice combination of luxury and space at a much lower price point. I love the Terrain's functionality, but the Denali model is a little expensive for my tastes. Maybe if I were more manly, I'd feel differently.

Flexible interior, lots of back seat and cargo room

One Response to “GMC Terrain”