Subarus are reliable little monsters no matter what adventure your weekend holds, which is how my 2013 Subaru Forester test car got carpool duty to the trailhead of a 10k race.

The capability of Subarus, with their full-time all-wheel drive, boxer engine (see explanation below under Driving Experience) and functional interior is borderline legendary. Packing all that into a small SUV (or CUV, as marketers would have it these days) only makes sense, thus the Subaru Forester, which has been with us since the late 1990s. Subarus are crazy popular with buyers in the Northwest and New England — both areas with lots of mud, lots of snow, and lots of idiots like me who insist on going out in that nastiness rather than curling up with a blanket and a cat.

The interior of the 2013 Subaru Forester is straightforward, with four comfortable seats sized for adults. The front two seats have optional two-setting seat warmers, which my post-run muscles appreciated on the 45-minute ride home from the race.
The huge rear compartment reminds me that when the Forester came on the market over a decade ago, it was called a station wagon by most people; in station wagon terms, this would be the “way back,” where dogs or skis reside.

With so much space in the seats and the rear cargo area, the Subaru Forester is very family friendly. The kids in the back seats don’t even have to touch, and there’s plenty of space for everybody’s snowshoes or sleeping bags for a weekend on the mountain. Because so many families these days have to take parents or grandparents with limited mobility into account, be aware that the Forester’s seats are a bit high, and it can be a bit of a stretch to swing the door closed.

There’s a reason Subarus are the vehicle of choice for people who spend an inordinate amount of time driving through slush and deep puddles. All four wheels of a Subaru are powered, which means you’ve got traction no matter what. (It also means the Forester doesn’t get the best gas mileage.) It’s also got tons of airbags, brake assist, and a reinforced frame.

The 2013 Subaru Forester is light on the technological flash, with only the very basics covered, like an AM/FM stereo with CD player and controls for it on the steering wheel. The test Forester had an optional all-weather package added, which included the heated seats, windshield wiper de-icer, and heated side mirrors. Thank God it wasn’t that cold on race day, but anyone in the market for a Subaru Forester will probably find themselves in a situation (like the far lot of the ski resort) where that extra $1,095 will seem like money well spent.

In previous years, the Subaru Forester had an available nav system with a tiny screen, few futuristic features, and hard-to-use buttons. There is an optional nav system with a 6-inch screen, as well as an optional backup camera, HD radio, voice-activated controls, Bluetooth connectivity, iPod controls, iTunes tagging, SMS text messaging, and more.

Running a 10k race in the fall in the Pacific Northwest is dicey at best. It could be sunny and crisp; it could be foggy and damp. We got the latter. This is where Subaru’s reliability comes in, so I’ll give you a quick, practical lesson on Subaru engine structure. Where most engines have cylinders that go straight up and down or sit at an angle in a V shape, Subaru’s cylinders lie flat — horizontally opposed, they call it. That means the moving parts inside the cylinder have slightly less gravity to overcome to get started, and those parts sit in motor oil all the time, so they’re always lubed and ready to go, even before the engine is warmed up.

We were also ready to go (but not lubed — ew), despite the fog and 40-degree temperatures. Sara, the tallest of the three of us running this race, chose to sit in the back seat, and she didn’t complain or cramp up on the long ride to the start line or on the way home. We each had a backpack full of extra clothes and snacks, plus a travel mug full of hot coffee and a water bottle, and we found slots and spaces for all of it.

We arrived at the trailhead in a state park an hour early, thanks to the line of Subarus of varying vintages headed in our direction. We listened to the local pop station on the six-speaker system all the way there, which meant we all ran with Usher’s “DJ Got Us Fallin’ in Love” playing over and over in our heads. Thus, the three of us finished within four minutes of each other and were happily back in the Subie with the seat warmers on for post-run relaxation. (Well, two of us had warm buns and hamstrings. Sara in the back had to suffer without a warmer.)


The Subaru Forester 2.5X starts at $20,595, with just the basics. But fear not! There are more versions of the Forester than 10k medal winners: the 2.5X Premium for $23,295, with a 10-way power driver’s seat and Bluetooth (this was the test vehicle); the 2.5X Limited for $26,595, with leather-trimmed seats and automatic climate control; the 2.5X Touring for $27,895, with dual-zone climate control and silver-colored roof rails; the 2.5XT Premium for $27,095, with a more powerful 224-hp engine and audio streaming; and finally the 2.5XT Touring, again with the bigger engine and those swanky silver roof rails. 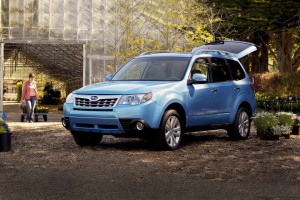 The 2012 Subaru Forester can get you wherever your next adventure lies, whether it’s at a trailhead, a ski resort, or your daily job. It’s a bit bare bones, though, so consider paying for a few upgrades to keep comfortable on the ride home.

The Subaru Forester is roomy and reliable as all get-out, and a car you’ll keep for years.

The styling is plain, but this is a vehicle for doing things, not for showing off.

The tradeoff for all-wheel drive all the time is 21 MPG city / 27 MPG highway, which isn’t so hot.

One Response to “Subaru Forester”