Photogenic on the outside, capable on the inside, the Cayenne is the ideal luxury vehicle for families who want to vacation outdoors or simply ride in style in the Burbs.

Here’s the scene: it’s carpool time at your kid’s new preschool. Dressed-to-make-you-feel-inferior moms, and a few shlubby dads, are lined up waiting for little Katie to come ambling over. You pull up to the gate, one car at a time. Like a Step-and-Repeat at the Oscars, it’s judgment time. But instead of paparazzi shouting “who are you wearing?” what’s being sized-up are your wheels. And much more vicious than the paparazzi, it’s the moms who are the assassins. (Shlubby dads, don’t act like you don’t know what I’m talking about.) You’re sweating like it’s your first day of school, thinking, ‘is my ride contemporary, is it chic, is it even clean?’

I can’t always vouch for the latter, but this week, I’m testing out the Porsche Cayenne, and I’m certain I’ve got the first two covered. OK, it sounds superficial, but that carpool lane is a shark tank. I’m wearing my college sweats, my hair is more Corgi than Kardashian, but in the Porsche Cayenne, I can glide through the carpool procession with my headlamps held high.

The Cayenne is a luxe and comfortable all-wheel-drive SUV, with ample room for five adults, and enough space in the cargo area for a week’s worth of camping gear or packages from a regrettable day of why-did-I-spend-so-much shopping spree.

It’s effortlessly at home on Rodeo Drive – almost nodding regally to other luxe rides on the avenue – but the 2012 Cayenne belies an off-road capability those vehicles wish they had (nice to know it’s there in case the mood strikes to go truffle hunting), and a road-handling prowess unmatched by the competition. I particularly love the Cayenne’s tight cornering through a twisty section of canyon near my house.

Though speed in the base model isn’t its selling point – the Cayenne I tested has a 0-60 mph time of 7.4 seconds, about the same as a Kia Sorrento, a Mini Cooper and just a whisper faster than the Honda Odyssey minivan (ouch!) – it has charms beyond velocity. And if speed is an issue, the Cayenne comes in three other Vroomier engine flavors, all the way to Turbo, which are fast enough to quench even the thirstiest speed freak.

Yes, the Porsche Cayenne is an able-bodied off-road trooper, and can haul up to 7,700 pounds of gear from a trailer hitch. But few of us will ever do those things.

Instead, I concentrated on how I felt inside the cabin. Yummy. The dashboard display is gorgeous and contemporary. The blingy chrome-tipped toggles and knobs look like they were born of a console of a very expensive private jet. A 7-inch color touch screen has optional navigation that can display a bird’s-eye view or a traditional 2-D picture, and in some regions of the country, a full 3-D view.

The 8-way power seats are comfortable, with slight bolstering for greater support along the torso. On tight corners, the seats held me snug. Backseat riders will feel like they’re in a home theater with two 7” swivel-mounted, touch-screen monitors and a pair of wireless headphones.

My favorite feature: the optional panoramic sunroof blankets the entire cabin in sunshine. It’s cheerful and uplifting, so you can say goodbye to SAD – Season Affective Disorder. At night, driver and passengers are treated to a celestial wonderland – with 15 square-feet of openness (four-times larger than the standard moon roof.)

The Porsche Cayenne is a safe haven. It comes with dual front airbags, a driver’s knee airbag, and side airbags for each front seat. Also included are side curtain airbags, which provide head protection for front and backseat riders, and which are deployed early in cases of rollover, should that ever happen. Side airbags for the backseat are an option.

If you have kids, you’ll appreciate the LATCH anchor system, which comes standard and attaches the safety seat directly to the rear seat. Porsche even makes a seat to fit in the Cayenne. But all child seats will work just fine.

A note on the brakes. They’re huge and powerful. Porsche says they’ll stop the vehicle quickly, even when the Cayenne is loaded up with five adults, a full cargo hold of luggage, and towing the maximum hauling capacity of 7,700 pounds. I didn’t tow a thing. But I did load up the Cayenne with four adults and shopping bags from a day at the Farmer’s Market – shopping DOES count as an outdoor activity if it’s done in an open-air plaza. At full locomotion on the highway, I had to stop short when a car in front of me suddenly blew a flat tire. Fantastic stopping power.

I’m a bit of a techno-phobe (read Luddite), which puts me at a disadvantage in today’s cars. There’s so much “connectivity” onboard, I feel guilty wanting to do nothing but drive. That’s why I tend to love German cars. The Germans say, “why are you sipping coffee when you should be driving? Why are you checking Facebook when that spectacularly banked corner is coming up on the right?” When did it become so important to multi-task on the road?

Having said that, there is some gadgetry on the Cayenne that makes sense: the Lane Change Assist beeps when a vehicle enters too closely in the Porsche’s blind spot (all cars have blind spots to a greater or lesser degree), and the Park Assist and Rearview Camera kept me from dinging poles and other cars while parking. The nifty Auto Hold means the SUV won’t rollback on a hill while I’m stopped. That’s a particularly stress-relieving feature, especially when in traffic on an incline.

Another perk on the Porsche Cayenne is the additional navigation screen, which pops up on the gauge cluster behind the steering wheel. I was grateful that I never had to move my head to the right to view the Nav screen, like I do on so many other vehicles, which place the screen squarely in the center of the dashbord. Not having to avert my gaze while driving is genius.

The Cayenne comes in five iterations, each with escalating levels of engine, creature comforts and, consequently, prices. Some trim levels come in manual transmission but most are sold only in eight-speed Tiptronic versions, Porsche's automatic transmission that allows for manual shifting without the bother of a clutch. 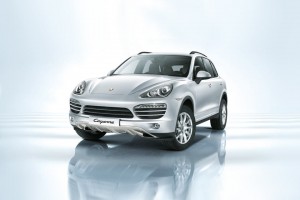 Both men and women love the Cayenne's style in equal measure. Not exclusively a guy's SUV, or a chick car, the Cayenne lands nicely in-between the gender divide. That means you (and hubby) can look forward to carpool lane pick-ups and showing those mean girl moms who’s boss.

An interior that's modern, with features that are intuitive to use

The base-model Cayenne's acceleration. Go for a quicker model.