The 2013 Porsche 911 is the quintessential sports car, the one to which all others are compared, and it just keeps getting better. Easy to drive, not as stratospherically priced as other, less-able competitors, and so pure in its intentions, it’ll make your heart sing.

In the spirit of full disclosure, I’m a Porsche owner. I drive a 2008 Porsche Cayman S. I love it with all my heart and soul, I love it like it’s a family member, I love it for making me smile every time I drive it, and for making me a better, more competent driver. So, as a card-carrying, certified Porsche freak, I approach the Porsche 911 Carrera with great anticipation and excitement.

I hear rumblings among my guy friends that there are mixed feelings about the 911. The pessimists say they’re disappointed that the latest iteration looks too similar to the outgoing body style. They would have liked to see Porsche’s designers take more of a risk. To push the design beyond its comfort zone, putting it into the next chapter of Porsche-dom. Still, other friends don’t mind that the car keeps looking like, well, a Porsche 911 Carrera.

Among the new features, this Porsche 911 Carrera gets the world’s first seven-speed manual transmission. I like to shift manually. But I have to admit, it takes some getting used to, this seventh gear…during my test drive, it felt as if I was shifting forever. But it’s all in the name of fuel efficiency. And so, if in this climate that is increasingly hostile to gas-guzzling sports cars, it means we must shift an extra gear to be a tisch more fuel efficient, then so be it. For those of you who prefer an automatic, the 911 also comes in a spectacular dual-clutch automatic transmission, which shifts quickly and with impeccable smoothness.

This new Porsche 911 has funky things like an exhaust button that allows Porsche’s famous baritone exhaust sound to be funneled directly into the cabin, providing the car with its very own sound system. Way better than DJ’d music anyday.

Porsche is the number one selling brand of sports car in the world. Those crack engineers must be doing something right. But a complaint among the brand’s non-purists (the ones who care more about things other than the performance of the vehicle) has been that Porsche hasn’t provided enough of a luxury look to the interior of its 911 Carrera. Porsche engineers have steadfastly adhered to the notion that they make sports cars, so the cars’ interiors should be absent of flourish. Not all Americans agree with that. Porsche listened, and all that changes with this model. A console, similar to the one in the brand’s super-luxe sedan, the Porsche Panamera, now graces the inside of the 911. It’s a long strip of toggles and dials for the car’s creature comforts. To me, this array of luxury is pretty to look at, but makes the car feel more cramped inside.

Seats are pure Porsche: bolstered, perfectly shaped to cradle the body while cornering, and stiff, but not so hard as to be uncomfortable. To be sure, it’s obvious Porsche designers spend a silly amount of time worrying about each pressure point a body is likely to find on the seat, and they account for it. The seats are fantastic.

One thing the designers didn’t mess with is the traditional five-gauge array on the dashboard. A couple of the gauges are readouts for oil pressure, engine temperature, gas reserves, and then there’s one each for a tachometer (the revs per minute engine speed) and a speedometer. The fifth gauge brings the Porsche 911 Carrera into the 21st century, with a full-color navigation screen, seen directly through the steering wheel, so there’s no need for the driver to move her head away from the road to see directions. Just a simple glance downward and that’s enough.

The 2013 Porsche 911 interior should satisfy the luxury seekers, but could tick off sports car purists, who like their Porsches a bit on the old fashioned side.

For half a century, the 911 has thrilled drivers who relish the feeling of lateral G forces – that sensation of being pushed deep into your seat under hard cornering. The 2013 Porsche 911 Carrera is a masterful sports car that is so sticky on the road, it begs to be driven fast on a twisty mountain highway. VroomGirls certainly doesn’t encourage reckless driving (in fact, we advocate that anyone who buys a sports car should take a performance driving class to learn how to control their new vehicle!)

The 911 wears big, beefy 19″ wheels, or optional 20″ wheels, all the better for traction in dry conditions. We took the car on curves above the Santa Barbara coastline in Southern California. No matter its speed, the Porsche 911 Carrera feels firmly planted, and seems to hunker down lower to the pavement the faster we drive. It is a confidence-inducing ride. You just think of turning, and it happens with such precision, it’s astonishing. Steering is direct, but not go-cart tight. And the 911 accelerates on demand, no hesitation. Fast; in fact, it hits the 60 mile mark from a standstill in 4.6 seconds. All what you’d expect from Porsche.

Hill Hold keeps the car stopped on a hill so it won’t roll back when the foot is removed from the brake and put on the accelerator. It’s a handy feature that keeps the car from rolling into anything behind it. Another great feature is the electronic parking brake, which automatically disengages when the driver taps the accelerator. The point here is that the car can’t accidentally be driven with the parking brake engaged.

Porsche’s safety features have always been, and continue to be, part of the entire package. The body is rigid, with reinforcements to the front, rear and sides. And the Porsche 911 Carrera is outfitted with formidable 13″ brakes, powerful enough to instantly stop this sports car in its tracks. Front and side airbags are standard.

Ok, so driving a sports car may not be eco friendly, but compared to other vehicles, it’s not as egregious as you might think. The 2013 Porsche 911 Carrera is designed to run on ordinary fuel, but also E10, a bio-fuel comprised of 10 percent ethanol. Many gas stations already pump E10 without consumers even knowing that’s what they’re buying. Plus, Porsche designed the new 911 to be 95 percent recyclable at the end of its life.

The Porsche Communications Management system controls navigation, audio and internet-based electronics. It’s all accessed either through an optional multi-function steering wheel or via the center console, and displayed on the full-color screen. The sound system has nine speakers standard, or there’s an optional Burmester Surround Sound system with 821 watts and 12 speakers, including an active subwoofer. It’s a whole lot of sound for a small 911 cabin, but it is worth the crazy splurge at $5,010.

For hands-free phone communication, Porsche offers Bluetooth. The Porsche Entry and Drive is a keyless system that allows the driver to keep her keys in her purse. Just touch the door handle or stand next to the trunk, and the doors unlock.

The base model Porsche 911 is plenty of car. Quick, able, loaded with excellent brakes, and adorned with an enthralling engine for a true sports car experience. It sells for $82,100. Think of it as the LIttle Black Dress, always in fashion, always the right choice.

If you're the kind of gal who just can't get enough, then test out how this dream car bumps the horsepower up 50 to 400 hp. This model retails for $96,400. It also shaves three-tenths of a second off of its 0-60 time, getting you from a standstill to Nirvana in 4.3 seconds. But be warned, once you try the S, there's no going back to basic black. 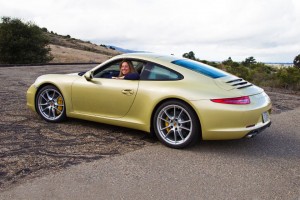 Porsche has yielded to non-purists who value luxury as much as sport. The Porsche 911 Carrera now feels like a luxury car, which at first drive for me, was a bit off-putting. I like the austerity, the lack of luxe, the was the norm on Porsche's flagship sports car. But I get it. The 911 still behaves like the bad boy athlete, but with a bit of manscaping and metrosexuality. I can live with that.

An unmistakable exhaust note that is sexy, robust and meaningful

A little too fussy fancy with interior gadgetry

One Response to “Porsche 911 Carrera”